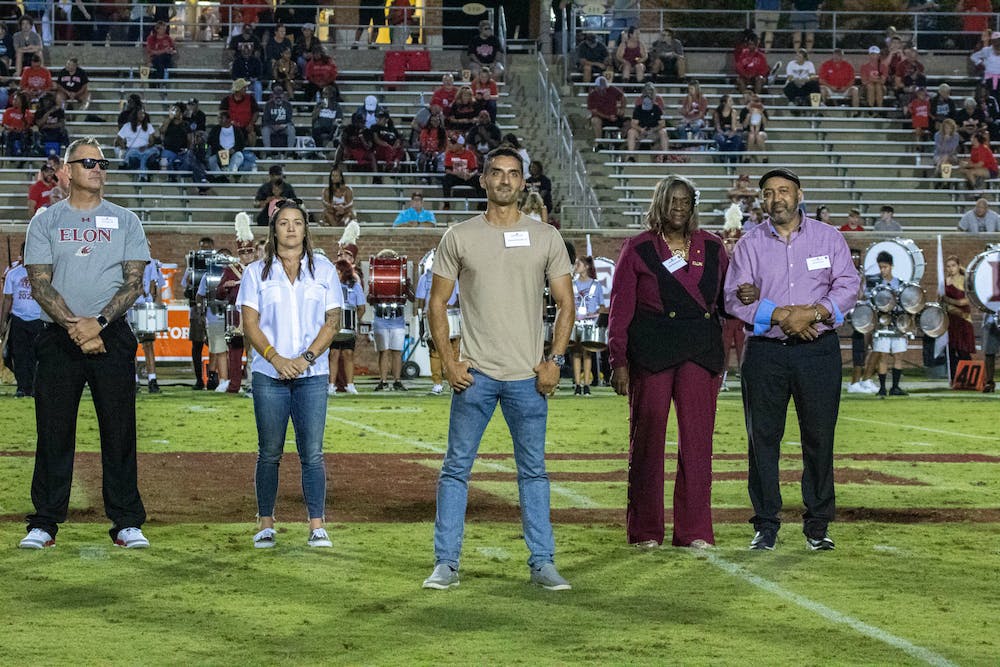 Photo by Joseph Navin | Elon News Network
Elon University's 2022 inductees to the sports hall of fame are seen on the field at Rhodes Stadium on Sept. 17 during the halftime show for Elon's first home football game of the season.

Four alumni were inducted into the Elon University Athletics Hall of Fame Sept. 17, making up the university’s 52nd class of inductees.

Jeannie Hairston-Eason ’82, Tony Pigott, Ali Ford ’13 and Cameron Silverman ’14 were celebrated at a ceremony in Schar Center. Among them were family and friends, former teammates, past Hall of Fame inductees, President Connie Book and Director of Athletics Dave Blank.

Hairston-Eason, who served as co-captain of both the women’s basketball and volleyball teams during her time at Elon, was inducted first. She said one of her proudest achievements was being named MVP  during the 1982 Carolinas Conference basketball tournament. She thanked her many teammates and touched on adversity she faced as a female athlete, given that Title IX — which requires schools provide men and women equal access to athletic opportunities and scholarships — was only passed in 1972.

“We literally had to fight for everything,” Hairston-Eason said in her acceptance speech.

Hairston-Eason is one of two players in the history of Elon’s women's basketball program with at least 1,300 points and rebounds. She is recognized as  Elon’s all-time leading rebounder, tallying 1,353 in total.

“I was just determined that every offensive rebound that I fought for was converted into two points,” she said in her speech.

Pigott, who played baseball for Elon from 1995 until he was drafted in June 1997 by the Tampa Bay Devil Rays, was inducted next. Pigott was originally recruited as a pitcher, but when the starting center fielder was sidelined in 1995, he stepped into the position. Over the course of his Elon career, Pigott had a .347 career batting average and 13 total home runs, earning him Freshman of the Year in 1995.

After thanking his family and friends, he acknowledged each of his coaches through the years.

“I learned something from each one of my coaches that I’ve had — who put me in my place, which every athlete needs,” Pigott said in his acceptance speech.

The next inductee, Ford, played women’s basketball and softball for the university. She said prior to the ceremony, she had come back to campus as a basketball coach for opponents such as the University of North Carolina at Wilmington, but she was proud to be representing the Phoenix.

“It feels really nice to be maroon and gold again and be home,” Ford said.

On the basketball court, Ford holds a total of 338 career three-pointers and 2,020 career points overall. She was also honored as the top female athlete in 2012 with the Stein H. Basnight Outstanding Athlete award. Ford was also a defensive specialist for the softball team with a .929 career fielding percentage.

“I came into this program pretty small and with a big dream,” she said. “It felt really good for all those people to say those nice things about me today.”

“It’s great to be able to recognize all the hard work I put in over the years,” Silverman said.

In his senior season, Silverman was awarded the Intercollegiate Tennis Association’s Regional Senior Player of the Year after going 9-0 in his league matches. He said his proudest accomplishment was in his junior year when he beat the No. 1 ranked player in the country. Drawing on his own experience, he offered advice to current student-athletes.

“Hard work, repetition, listen to your coaches,” he said. “Show up everyday and practice with a purpose.”

The induction ceremony was followed by a tailgate and a special recognition during the halftime of Elon’s football game against Gardner-Webb in Rhodes Stadium.