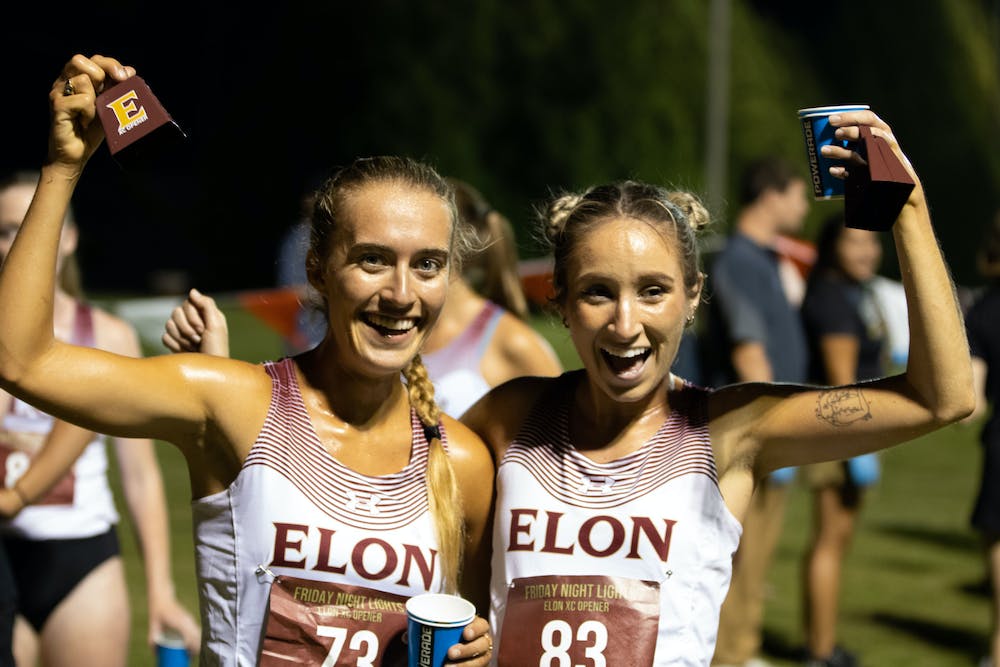 
Redshirt junior Leandra Lorenz and senior Maggie Springer celebrate after finishing first in second in the women’s 4k race at the Elon Opener at Elon University on Sept. 2. Lorenz won the race with a time of 13:22 and Springer placed second with a time of 13:25. Elon also won the team competition with 25 points.

With 25 points, the women’s team won the team competition in the 4k race. Elon finished 18 points ahead of runner-up Duke University. The men’s team finished second to Duke in the 6k race, as Elon posted 54 points.

Redshirt junior Leandra Lorenz won the women’s 4k race with a time of 13:22, and senior Maggie Springer came in second with a time of 13:25. Lorenz and Springer both finished over 20 seconds ahead of freshman Madison Synowiec, whose third place finish completed a podium sweep for Elon.

Lorenz said she enjoyed racing in front of the home crowd and was happy with the team’s first performance of the season.

“We went out hard as a team, and I enjoyed running with my teammates,” Lorenz said. “I stayed pretty relaxed, felt good and then I could finish a bit stronger to take the win, so it was nice.”

For Springer, the Elon Opener was a chance to return to competitive form early in the season, as both the men’s and women’s competitions are shorter than what the teams will face in later meets.

“This race is always kind of a rust buster and more of a reminder of how to work as a team,” Springer said. “It was awesome to be with Leandra side by side and working together the entire four laps. She’s always great and was pushing me at the end. That’s where she really helps me a lot and that was just awesome to work together.”

Lorenz and Springer both finished in the top five at last year’s Colonial Athletic Association championship meet, behind senior and defending CAA champion Maria Ahm, who did not participate in tonight’s race. Head coach Kevin Jermyn said Elon’s top three runners will push each other throughout this season.

“Maybe a beautiful problem to have is to worry about who might win,” Jermyn said.

Elon’s women’s team has won the last three consecutive CAA team championships and will look to win a fourth next month. While there are new teams in the CAA this season that could challenge Elon for the team championship, Lorenz said the team’s main goal is to defend its title again.

“We hope we can win again this year,” Lorenz said. “With the new schools in the conference, it’s going to be a little harder. It’s definitely not going to be as easy as last year to win.”

Elon’s men’s team posted 54 points to finish runner-up behind Duke, which won the team competition with 17 points. With a time of 18:35 in the 6k race, junior Zane Jackson finished ninth to lead the way for Elon.

“It’s always a good race,” Jackson said. “It’s all on pretty soft grass, and it’s a little more challenging than it looks.”

The men’s team added 10 new runners this season after placing third at last year’s CAA championship meet. Jackson said he is impressed with the team’s freshmen and is excited for the team to grow this season.

The Elon Opener takes place at a temporary course on the school’s intramural fields. It is the only night race Elon competes in each season.

Jermyn said he always enjoys hosting this event because he believes the nighttime conditions are better for long distance running, and the layout of the course makes it easier for spectators to watch the races.

Elon’s cross country teams next compete on Sept. 16. With eight weeks until the CAA championship meet, Jermyn said the teams will spend the rest of the season preparing for the event.

“We need to keep on getting better,” Jermyn said. “The races will get a little longer and the competition a little bit more competitive. We’ll get tested more and more with the goal being ready for CAAs.”