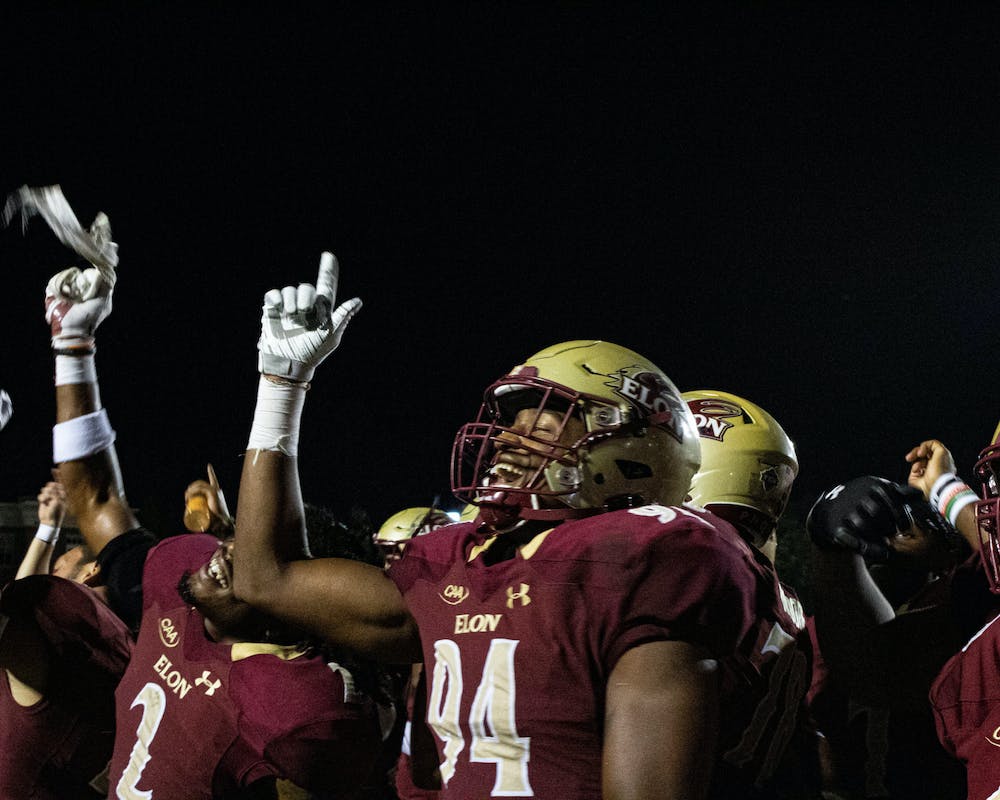 Elon University football knocked off Gardner-Webb University 30-24 to win its first home game of the season.

With a 6 p.m. kickoff, tonight marked the first night game at Rhodes Stadium since 2018. However, the balanced Phoenix offense was far from tired, totaling 260 yards through the air with 250 yards on the ground.

“We are a take what you give us offense from a philosophy standpoint,” Head coach Tony Trisciani said. “If you can run the ball for 250 yards like we did today and hold on to it, we can win a lot of football games.”

The passing game started out hot in the first half for the Phoenix, recording 134 yards. The scoring started with a 46-yard field goal by senior kicker Skyler Davis. Elon turned it into a quick 10-3 after redshirt senior quarterback Matthew McKay hit senior wide receiver Bryson Daughtry for a 39-yard touchdown.

After a huge 48-yard punt return by junior Tre’Von Jones, Elon stretched the lead to 13-3 thanks to a 51-yard Davis field goal. The Phoenix returned to the end zone on the next possession after McKay hit running back DJ Moyer in the flats for a 24-yard touchdown reception.

Despite the 20-3 start, two first half turnovers caused by the Phoenix offense allowed the Bulldogs to score 14 unanswered points, giving Gardner-Webb a 24-20 lead at halftime.

The challenge was met head-on by Elon’s defense as the unit held Gardner Webb scoreless in the second-half. Defensive ends Torrence Williams and Josh Johnson anchored the defense, combining for four sacks and seven total tackles.

“I just told our guys we had to believe in ourselves,” Williams said. “We couldn’t control it coming out of the locker room at halftime. The guys already knew what we needed to do so we just locked in and turned it around.”

Elon reclaimed the lead to start the second half after a fumble recovery led to a 27-yard touchdown reception by wide receiver Jordan Bonner. The Elon defense continued to stand strong throughout the fourth quarter forcing two 3-and-outs.

Gardner-Webb’s offense had a shot to win the game after getting the ball back down 30-24 with 41 seconds remaining. On a last play attempt to get into the endzone, Jones came away with the football, sealing a victory for the Phoenix.

“We talk about it all the time as far as doing your job one play at a time until the job is done,” Trisciani said. “It took us all the way down, 60 minutes today until the job was done. But, it was a great win and I’m proud of the team.

Daughtry powered the passing attack for the Phoenix, racking up 88 receiving yards. McKay continued to impress, finishing with 287 total yards, three touchdowns, and the lone interception. On the ground, running back Jalen Hampton rumbled 34 times for 204 yards.

“I knew that before the game, I’m stronger than the defense,” Hampton said. “I just believed in myself and just continued to keep my feet going and reading my blocks.”

Elon will be back in action next Saturday at 3:30 p.m, traveling to Williamsburg, Virginia, to take on the Tribe of William & Mary and begin conference play.