3rd time’s the charm: Matthew McKay settles in as quarterback

This season marks a new beginning for the redshirt senior 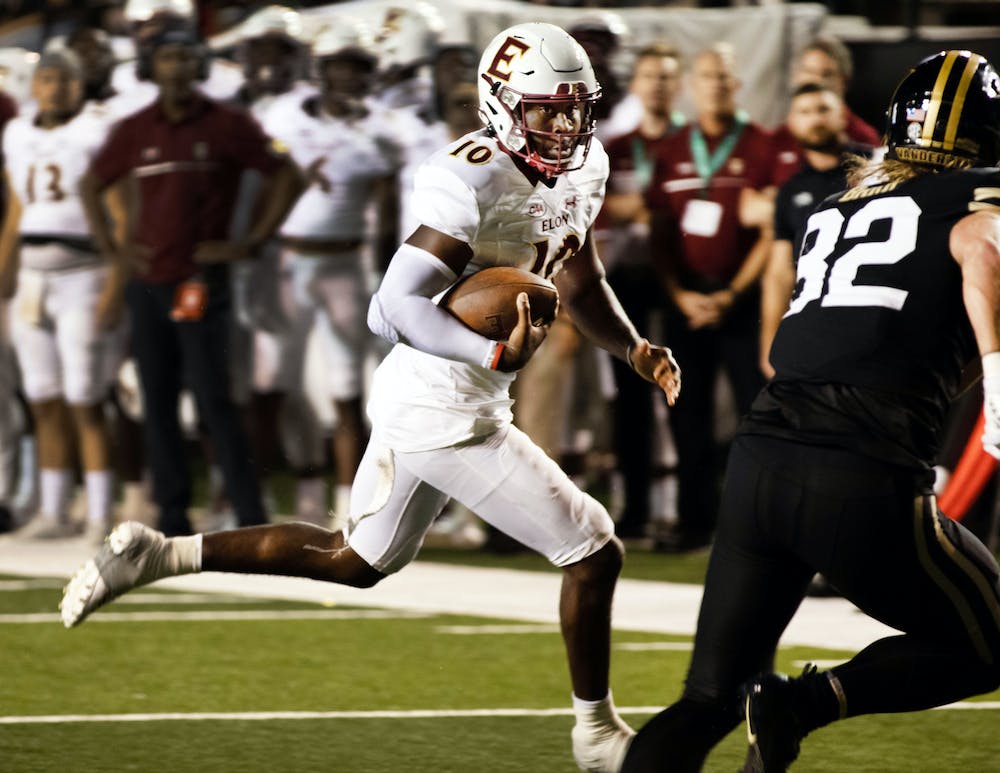 The drive from his home in Raleigh to Elon University may only take one hour, but it took quarterback Matthew McKay four years to find his place playing for the Phoenix.

“Definitely in my past years facing some adversity, I felt like I had to move around, just being in the transfer portal,” McKay said. “But a couple of months ago, talking to Coach Trisciani and Coach Folmar while I was in the portal, I just felt like Elon would be a great place for me. Close to home so I have that support here, and it’s a great opportunity to be a part of this team.”

Drew Folmar, offensive coordinator and quarterbacks coach, said McKay has been on his radar for a while, and he specifically caught his eye during recruitment last spring. Following former quarterback Davis Cheek’s graduation, Elon’s coaching staff decided the best choice for the team was to find a quarterback in the transfer portal, according to Folmar.

“I knew of Matt, I mean he’s not from too far away. So I knew a little bit about his journey,” Folmar said. “It’s been a joy and a pleasure to have him here so far. We’re excited.”

During his two seasons at NC State, McKay faced tough competition against strong players from the Atlantic Coast Conference. McKay said the experience was valuable, but no matter the school, every football season presents opportunities to learn and work hard.

“A good opportunity — learned a lot being around a lot of great players,” McKay said. “Just being at that level, just understanding that it’s football every level. We all bleed, we all sweat. So just go out there and execute.”

Folmar said he sees McKay as a leader to the team, as he is vocal in the locker room with his teammates.

“He’s a smart player. He picks things up very fast, and he’s competitive. And those are all very, very strong qualities that you need as a quarterback,” Folmar said. “He’s really developing into a leader.”

Despite being new to the team, McKay said he has been given a lot of freedom by Folmar and head coach Tony Trisciani with running offense. He said they have already established trust between each other and have a shared goal of wanting to win.

“Definitely a great relationship. I can trust them, and they trust me, and I can go to them with anything,” McKay said.

Having played on three collegiate football teams, McKay is used to having to adjust to new systems of offense, and Folmar said he is not concerned about McKay’s transition to Elon.

“A lot of things he’s doing here, he’s done in his career. It’s just a matter of translating terminology, so he’s continuing to get more and more comfortable every day,” Folmar said.

McKay said Elon’s 42-31 loss to Vanderbilt Sept. 3 was a poor reflection on the Phoenix, but the team has watched the film and identified the mistakes players made in the first half. McKay said that improving the team’s third-down conversion rate will be crucial for offense, and as quarterback, he is in a position to help.

“I would say definitely coming out from last week, starting the game stronger.,” McKay said. “Definitely just third downs and converting those as an offense, and I feel like I play a big part in that.”

This year, the key to Elon’s success, according to McKay, is to focus on the small details. He said the Phoenix executed this well against Wofford on Sept. 10. Elon won 26-0.

“We have a good offense,” McKay said. “And when we understand what we’re doing and just focus on the little details — I feel like if we do that, then we win games.”