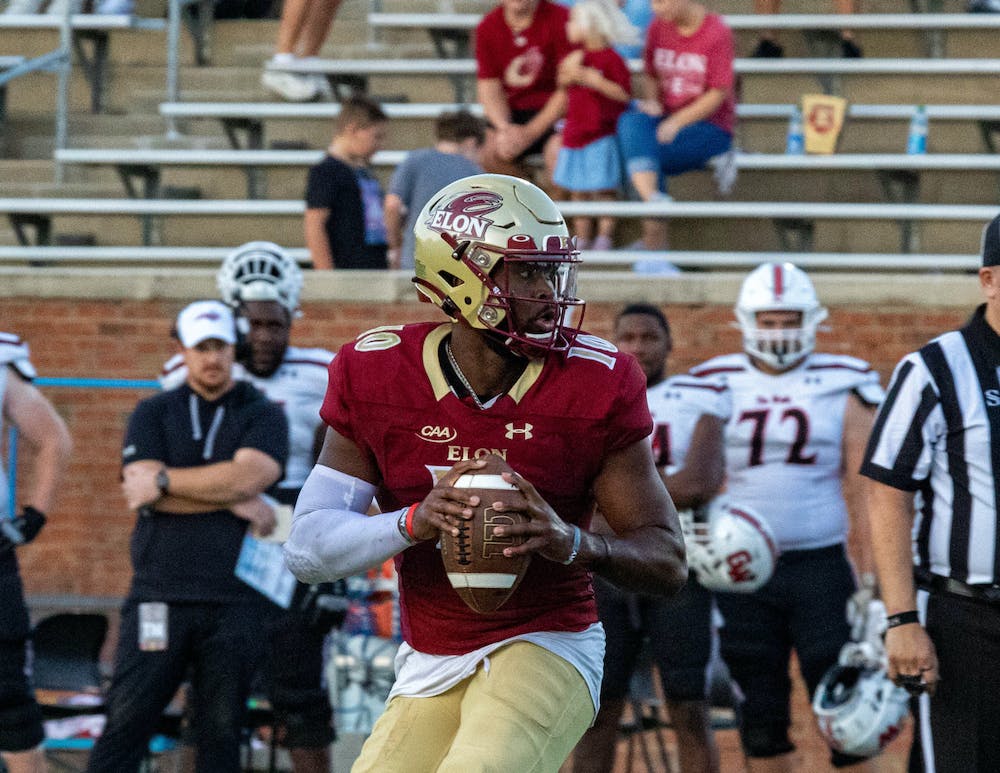 Elon football starts preparation to begin conference play this week, as the team is set to face off against the Tribe of William & Mary this Saturday.

The Phoenix rides a two-game winning streak heading into conference play after knocking off Gardner-Webb in a nail-biter at Rhodes Stadium on Sept. 17. After winning 30-24, Elon currently ranks sixth in the Colonial Athletic Association with a season record of 2-1.

After finishing 5-3 in conference play last season, head coach Tony Trisciani is confident in his team and the experience his players bring to the table this time around.

The Phoenix’s offense got off to a hot start through three games, averaging 29 points per game with 10 total touchdowns.

Senior quarterback Matthew McKay has started coming into his own leading the offense while receiving help from redshirt freshman running back Jalen Hampton. Hampton, who burst onto the scene against Gardner-Webb, has allowed Elon’s offense to become more complete and harder to defend.

“We want to run the football,” Trisciani said. “We know that’s going to open things up on the perimeter, and we’ve had a lot of success the last couple of weeks here with the play-action pass. If teams are going to load the box on us, we gotta take what they’re giving us.”

The defensive front has been the fuel for Elon’s defense throughout the first three games of the season, totaling 10 sacks and eight quarterback hits.

According to Trisciani, being able to make a difference up front allows the secondary to play “fast, free and aggressive,” and there’s one player in particular who has made that possible this season — defensive line Torrence Williams.

“It’s been a disruptive front for us,” Trisciani said. “Williams is an experienced player and a leader who’s ready to really have a breakout season here in the CAA.”

Williams, a redshirt senior, recorded 1.5 sacks, four total tackles and a pass break up in the win over Gardner-Webb. As a leader on defense, his impact stretches further than the stat sheet for this defense.

“The thing about our guys is, we’re real close,” Williams said. “We hold each other accountable. We love each other. So, when things are hitting the fan, we know how to stick together and turn it around.”

That level of trust and camaraderie on defense has paid dividends on the field this season for the Phoenix. Elon’s defense has only allowed 14 second-half points through three games, with all 14 points coming in the first game of the season against Vanderbilt. On Saturday Sept. 17, Elon’s defense rallied after being down 24-20 at halftime, resulting in a shut-out performance in the second-half.

Elon’s defense will have a monster test in the first game of conference play against No. 5 William & Mary this weekend. The Tribe’s offense has averaged 37.33 points this season, riding a strong balanced offense of its own that’s powered a 3-0 start to the season.

The Phoenix offense will have a tough challenge of its own preparing for William & Mary’s defense, which features three weapons who have been captivating headlines all season: junior defensive lineman Nate Lynn, redshirt freshman cornerback Jalen Jones and sophomore linebacker John Pius.

The stage is set for a great matchup that will be taking place at 3:30 p.m. Sept. 24 in Williamsburg, Virginia to kick off the start of CAA action this season.