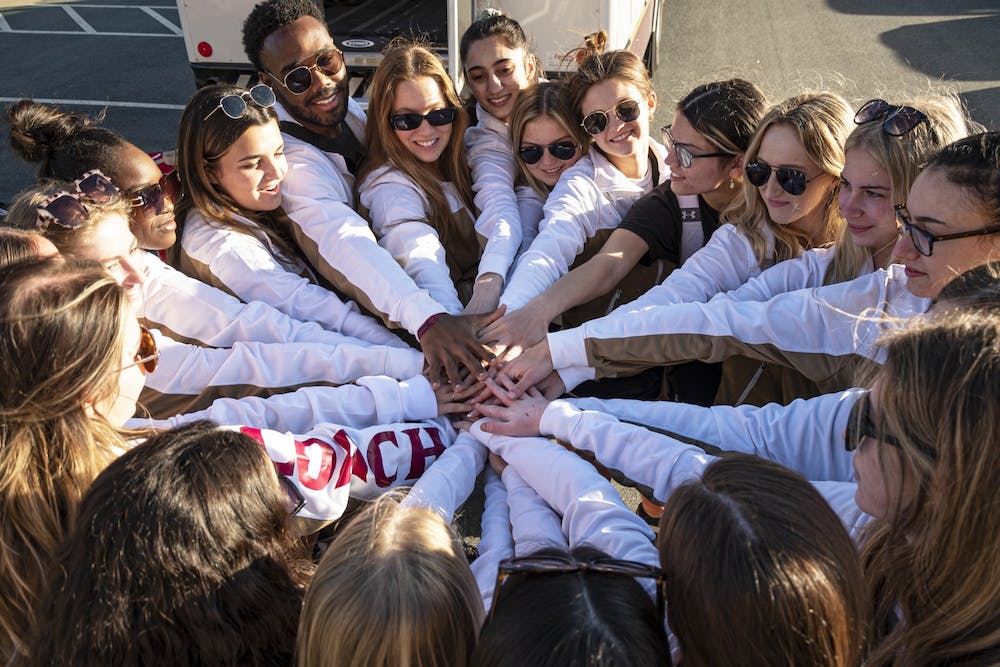 
After arriving home to a small crowd, the Elon University dance team do one final "Rise Up" behind the Schar Center on April 10, 2022 after winning the Division 1 Hip Hop Championship and placing third in the Division 1 Pom category. This was the first time in program history that the team won the NDA National Championship.

The reality of her senior season did not sink in for Elon dance team member Devyn Battaglia until she arrived at the National Dance Alliance preseason camp in Myrtle Beach mid August. As one of five seniors on this year’s team, Battaglia realized this trip was the first of many lasts the team’s seniors will face this season.

“That was the last time we’re going to be there,” Battaglia said. “It’s sad to think that your undergraduate dance career is coming to an end.”

Battaglia and the other four senior members of Elon’s dance team — Lucy Allen, Ava De Bruin, Sarina Jackowski and Lindsey Rothenstein — have helped transform the program into one of the best in the country. Last April, Elon earned its first NDA national title by winning the Division I hip-hop competition. The team has also earned gold bids for NDA Nationals each of the last two seasons, something the program had never previously done.

While the team has enjoyed new heights the last two seasons, Rothenstein said the rise did not come out of nowhere. For her, the team’s recent results are not surprising, as the team has been building since her freshman season.

“The one thing that hasn’t changed is our drive and the passion,” Rothenstein said. “Although we have more success now than we’ve ever had before, those values were always there.”

“I didn’t quite honestly even really know what a college dance team was,” Jackowski said. “I just was definitely not going to stop dancing, so I just did the next thing that everybody does.”

Jackowski’s first season was the senior season for team captain Elly Dirks, who is now the program’s head coach. The season was difficult for both, as the team faced challenges with morale.

“Girls were quitting, it was hard to get people to stay on the team,” Jackowski said. “You could tell that it was kind of broken or there was something missing because people weren’t staying and the environment wasn’t the best.”

Dirks became the head coach the next season and selected Allen, Battaglia and Rothenstein to join the team for the 2019-20 season. After learning about the morale struggles Dirks had dealt with in her time as a member of the team, Allen said the newcomers were determined to rebuild the program.

“Hearing where they started lit a fire in us to really push the program further and fight for a success story for the team,” Allen said.

COVID-19 cut Elon’s 2019-20 season short a month before NDA Nationals and severely impacted the 2020-21 season, as the team was able to perform only sparingly. However, the team continued building positive momentum and developing a strong chemistry despite the difficult circumstances.

For Allen, the team’s success is in large part due to how close everyone became to each other, which has helped them push each other on and off the dance floor.

“What we do requires a lot of trust,” Allen said. “That’s built over time and through having a really strong connection with your teammates.”

Dirks believes this year’s senior class has helped establish a professional culture for the program and has led by example to inspire the team’s younger members to work hard and trust each other.

“One of the quotes I tell the team all the time is, ‘There’s no comfort in growth, and there’s no growth in comfort,’” Dirks said. “The seniors have definitely demonstrated that to a tee. They find ways to become uncomfortable so they can grow, and I think that everybody thereafter has really seen that and valued that and admired that.”

Elon will return to NDA Nationals in Daytona Beach next April to defend its national championship title in what will be the final competition for this year’s senior class. The team will also perform at home football and basketball games throughout the season.

Dirks said she is encouraging her seniors to channel the emotions that come with being a senior in a positive way that can benefit the team this season.

“It’s easy to be like, ‘Oh, this is my last year, and it makes you sad,’” Dirks said. “Yes, that’s valid, but let’s try to reframe that mindset and get every little bit that you can out of it and grow as much as you can this last year. And with that, you grow the program so that when you leave, you feel fulfilled and it’s not as much of a sad thing.”

While the team’s accomplishments and success are important to the seniors, more so is the culture they have established. For Jackowski, who experienced the program before its ascension, the team’s legacy extends beyond championships.

“The best part of the legacy that this team leaves and what I’m excited for is to continue that family mindset because that’s what makes this team different,” Jackowski said.

Although the five senior members will partake in their last dance at Elon at season’s end, they know the program will always hold a special place in their hearts.

“We all came to this team obviously because we love dance, but mainly we wanted to be part of something bigger than ourselves,” Rothenstein said. “I feel very secure that when we graduate, we will still be a part of this family.”