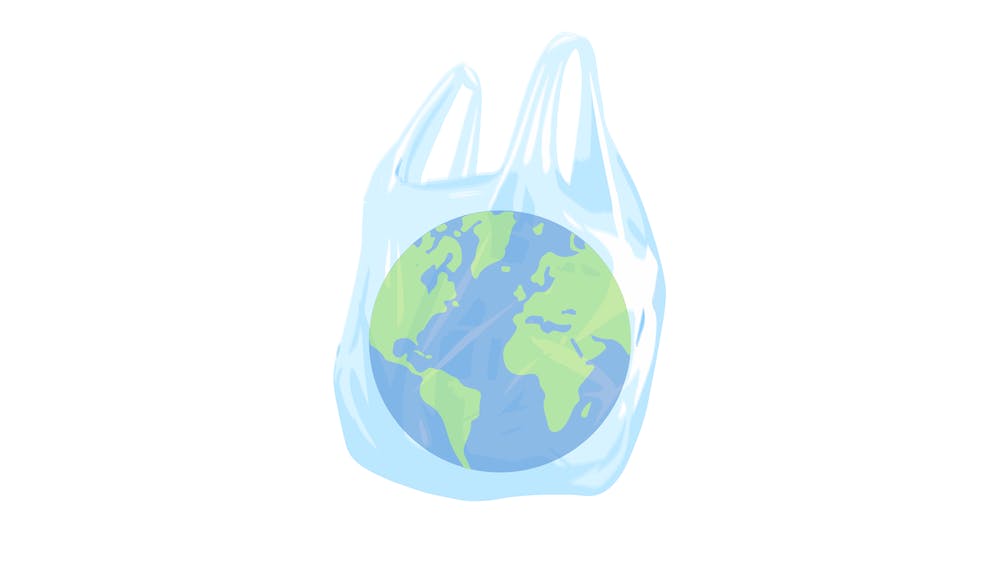 Photo by Caroline Mitchell | Elon News Network
Both within North Carolina and across the country, grocery stores are choosing to eliminate single-use plastic bags for customers.

Both within North Carolina and across the country, grocery stores are choosing to eliminate single-use plastic bags for customers. States such as New York, California and Connecticut have already implemented plastic bag bans, and earlier this summer, grocery chains Wegmans and Walmart announced plans to remove plastic bags from their stores. Rather than single-use bags, which are made from thermoplastic materials such as polyethylene and polypropylene, stores are promoting paper or reusable alternatives.

Professor Patricia Thomas-Laemont, who teaches environmental studies, discussed the impact plastic bags have on the environment and other things students can do to decrease their own environmental impact.

Why would some grocery stores take away the option for consumers to use plastic bags?

“There’s certainly a push for this because the bags are really bad. It’s bad for wildlife — the chemicals used to make them. They pretty much don’t get recycled. For the most part, It’s very low.

I think it’s public demand, for one, but some of it is they save a lot of money doing that. And in Europe, I know in the U.K., if you go in without your bag, you have to pay for it.”

How do reusable bags differently impact the environment?

“The payoff is reusing them. Basically, the plastic bags are one use, if you’re lucky. If you look at the amount of water it takes to make it, you can see the polyethylene bag is one use and the greenhouse gas emissions are lower to make than [reusable] bags. But you start looking at eight uses, … it goes way down.

You can see that you’re really paying off by using them at least eight times. That’s the benefit of reusable bags, is that, long term, reusable really does pay off as far as carbon, as far as resources. And that’s not including the recycling. If you include the power recycling takes, that’s a whole other thing — chemicals and shipping — and usually they’re burned.”

Do you know what the likelihood of a plastic bag getting recycled is?

“It’s really low. The paper does tend to get recycled a little bit more. I’ve heard places such as China are no longer taking our recycling. It might have improved, but I have heard in the past that bags even submitted for recycling just go and get incinerated in China. It’s time consuming — that’s not even counting the cradle-to-grave of the actual energy that goes into recycling the bag. It takes [over 90%] less energy to recycle one pound of plastic than one pound of paper, though.”

If single-use bags are not recycled, what is the environmental impact?

“They’re immortal. They get into the environment, and they are not disposed of properly. So it’s just one use, and then it goes into a landfill.

People say, ‘We can’t just stop putting plastic bags out or making you pay for them because it would impact disadvantaged people more,’ and that’s a valid argument. But my counterargument is that it’s pretty easy to get these bags for free at work, or have food banks give out these free bags.”

What are other things that consumers can do to lessen environmental impact?

“Really try to move towards using reusable bags, I even have these little produce bags, little thin bags. I see people with one apple in the bag, so you can buy these that you can reuse and can wash for your produce to try to cut down as much packaging as possible.”

Are there things that you’ve noticed that Elon could be doing to be more sustainable?

“They’re pretty good as far as encouraging reusable water bottles and the bring-your-own containers. I think they do whatever they can to make people aware of things, and I have the Elon sustainability people come and talk, and they’re pretty good about everything.”

Are there things that you’ve noticed that Elon could be doing to be more sustainable?

“It’s your future. Plastic bags are made from a finite resource. For every molecule of carbon that gets thrown into a plastic bag, and disposed of … there’s only so much carbon, and if it gets incinerated or whatever, it ends up in the atmosphere.”