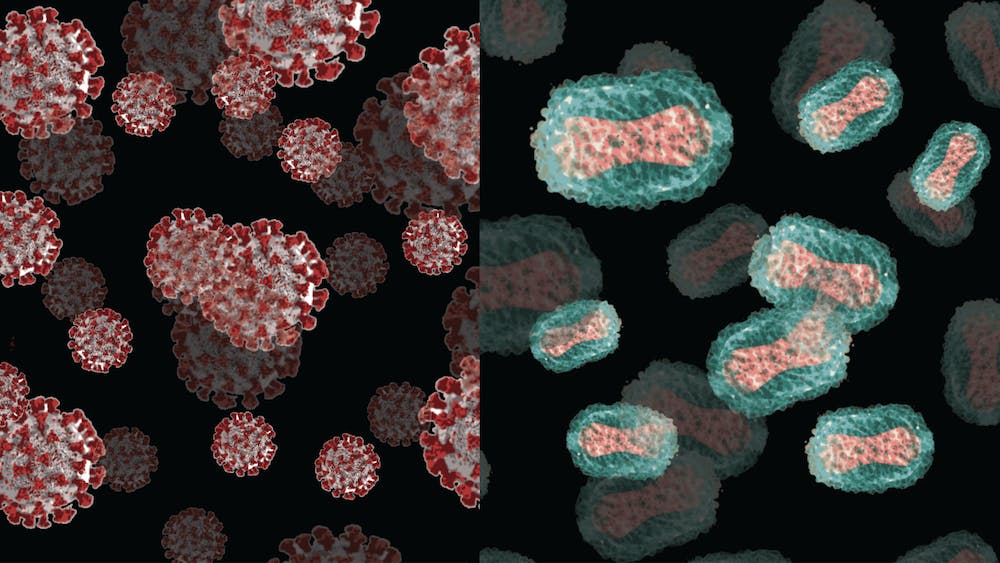 Kevan Schoonover McClelland, professor of biology, shared what this means for students compared to COVID-19 and how it is transmitted.

Compared to COVID-19, what are things that students should be aware of, regarding transmission about Monkeypox?

So the big difference between COVID and monkeypox is that monkey pox appears to require actual physical skin-to-skin contact with the lesion in order to be transmitted. So, transmissibility is a lot lower than COVID. And then the other thing is in terms of how severe the illness is, a lot of times it is not going to be as severe as COVID.

So you might feel crappy, and you’re going to have lesions, but I actually looked up the data this morning and the mortality rate worldwide is less than 1%. In the United States, we’ve had one reported death out of almost 25,000 cases. So it’s not as deadly, it’s not as transmissible and it’s a lot more treatable, since it is related to viruses that we’ve already made, vaccines and treatments for. So it’s not nearly as bad as COVID in terms of the severity of everything.

How will it affect vaccine roll out?

I don’t think it’s going to really change much. Right now, the guidance is that only high risk groups need to get vaccinated. And that is primarily with folks who have multiple sexual partners, since there is a lot of physical contact, they’re in regular physical contact and extended physical contact. For the most part, most folks do not need to get vaccinated and in terms of actual treatment, they also are suggesting that unless you are at risk for having a severe case, they don’t really want you taking any antivirals either, and basically just ride it out. Not really something huge to worry about, in terms of mass vaccinations. Just being a little bit smarter about washing hands, paying attention to your own symptoms. As of right now, it does not appear that it’s transmissible unless you are actually having the symptoms of the lesions on your skin. And so just being very aware of that, and if you have any questions, reach out to a healthcare professional.

What does it mean that it was declared a global pandemic?

I don’t know what the WHO or the CDC definition of global pandemic is, but it is currently present in I think 104 countries and overall, it has a much wider spread than it typically does. Up until this recent wave of infections, it had been highly localized to the Congo Basin and Sub Saharan Africa because that’s where it developed. They think it originated with rodents and non-human primates. So chimpanzees, bonobos, things like that. And then, the reason why it’s so widespread now is just due to all the international travel going on. The fact that a lot of folks didn’t know what the symptoms were and so there was a lot of skin to skin contact before we really knew what monkeypox looked like. We actually had a monkeypox outbreak in America almost 20 years ago. Because of infected prairie dogs, someone had prairie dogs as pets. And the prairie dogs were housed with other animals. And those animals had monkeypox and that spread to prairie dogs. And then the prairie dogs gave it to the folks who had the prairie dogs as pets. So it’s not like it hasn’t gotten around, it’s just how prevalent it is this time. That’s the novel thing that’s going on. In terms of pandemic, the definition of pandemic has to be there’s a certain number of cases that you have to hit in a certain number of countries. But I will say that, the word pandemic is very scary, but if you actually look at it, in this case, it really has to do more with how prevalent the disease is and not the severity of the disease. That’s actually true in most cases where the word pandemic does not mean that there’s some deadly thing out there. It just means that there’s a lot of it and it’s all over the place.

Is this something that you should be concerned about with this?

I don’t think they need to be overly concerned. I’m not 100% sure how many cases North Carolina has had. I recall there being a couple of cases in Greensboro at one point, but so long as you’re washing hands regularly. To be completely honest, the majority of transmission in the United States is between gay men through sexual contact, and so just being aware of how many people you’re coming into contact with and being aware of your own symptoms. And what monkeypox symptoms actually look like. Just be aware, but it’s not it’s not a huge thing to worry about now.

You probably will be out of class for between three and five weeks because that’s usually how long it takes for the lesions to go and you’re contagious until the lesions have completely healed. So you wouldn’t be out of class, but in terms of long term health effects, it seems that the outlook is very good in terms of recovery and going back to normal.