This year’s programming will pull from lessons learned during pandemic 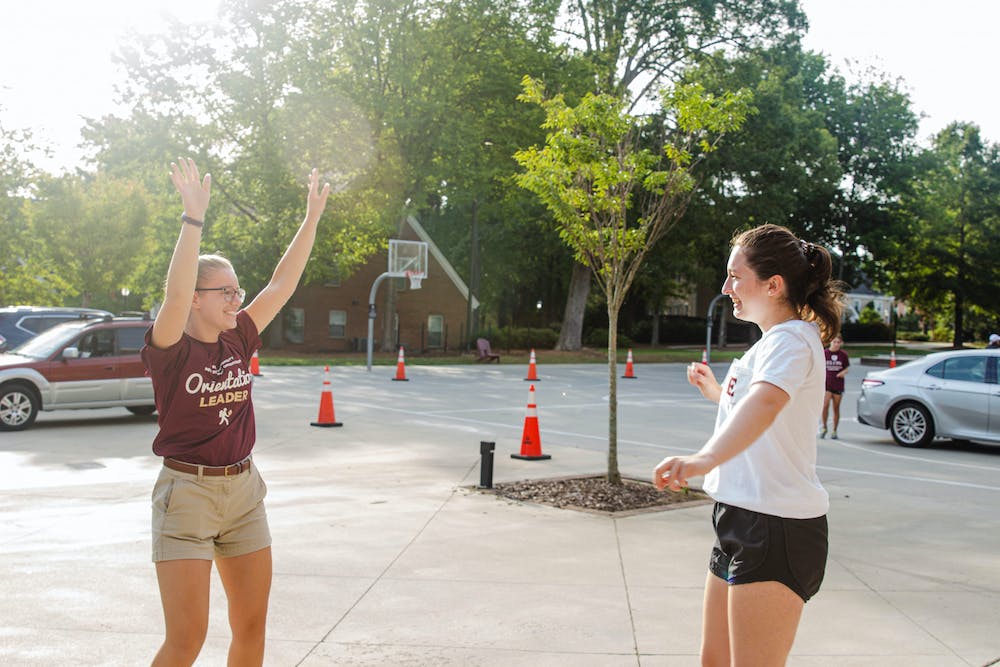 
Michelle Marder, an Elon 1010 peer educator, dances to music with a fellow orientation leader as they help incoming first-years move into the Global Neighborhood on Aug. 19.

Director of New Student Programs Emily Krechel said after two years of modified programming, she is using the lessons learned from the COVID-19 pandemic to focus further on building a sense of community through orientation.

New student orientation was modified most drastically in 2020. That year, programming was in person but done in small groups, and orientation leaders would play videos for the students and facilitate conversation. However, the entire class never came together in one big group.

Krechel said this summer, New Student Programs is thinking more permanently, looking at what pieces of the programming from the last two years it wants to keep and how it wants to shape Elon’s orientation experience going forward.

“We’re living with COVID. We know that it’s going to be something that we just have to manage,” Krechel said. “But we need to keep moving forward.”

“This thing that we sell students and families is this really intimate experience,” Krechel said. “‘I’m in a smaller group, I’m not one of 1,800 people in Alumni Gym.’ We want to keep some of the smaller experiences.”

Freshman Anjolina Fantaroni is most excited about furthering the connections she has already made on social media.

Fantaroni remembers when acceptance letters were released — she was at a rehearsal for a theater performance.

“Somebody texted you can go see your decision, and I had no service,” Fantaroni said. “I had to run a half mile down the road to hold my phone up a hill. I was so excited,”

The Massachusetts native comes to Elon as a leadership fellow, and her orientation group will consist of other new students in the program. Fantaroni said she is used to leading in her high school and looks forward to the opportunity to continue, in a new way, while at Elon.

“I know that when I get to orientation, I’ll meet people just like me who share the same traits, qualities of a leader,” Fantaroni said. “I’m excited for our mentor to show us new ways to approach leadership and really just learn the ways of Elon. It’s a brand new community.”

Finding communities where students feel a sense of pride and belonging is one of the main points of this year’s I Am Elon session. It’s in partnership with the Center for Race, Ethnicity and Diversity Education and will be held Aug. 20 in remote, small groups.

Groups will watch recorded monologues of students talking about their intersecting identities with opportunities for orientation leaders to facilitate conversations with their groups.

When done in person at Alumni Gym in 2019, Krechel said trying to have small group conversations was ineffective because of the large grounds. She said this year’s format does allow for intimate and authentic conversations.

“We found that’s really provided a space for new students to really open up, to explore, to ask questions, to share and dive deeper into getting to know one another with folks in their group,” Krechel said.

Krechel said she had a lot of ideas for orientation programming to enforce the community connection since her arrival in April 2017. Being forced to change the model in 2020 due to COVID-19 set these ideas in motion.

“We have this experience where we had to make this giant pivot to doing everything in small groups, and then had an opportunity to really take a step back and say, ‘What did we learn from that?’” Krechel said. “We were able to figure out a way to do small, intimate things. So I think without COVID, we would have gotten there, but I think it would have taken longer.”

The Speak About It session Aug. 21 focuses on consent and healthy relationships. Since the partnership with Speak About It began in 2020, this will be the first time the acting troupe will be in person at orientation.

The scripts are adapted to the university, its policies and its culture to make the topics discussed resonate more with students.

University traditions like New Student Convocation and Call to Honor support the concept of community Krechel hopes to center the programming around. She said athletics is another big driver of community.

While there aren’t any football games during orientation, Krechel said they are doing a tailgate that will lead into the Aug. 21 soccer game, where the team will play in Rhodes Stadium.

New students will go with their orientation groups, which is also their Elon 1010 group. Krechel said the tailgate, one of the newer additions to orientation programming, will have yard games and inflatables.

Krechel said a one-stop check-in process will happen for the first time this year. Students will still go to Schar Center first to make sure all health requirements are met. Here, they will get keys, passes and other orientation materials.

Orientation will begin Aug. 19 and will continue until the first day of classes Aug. 23.