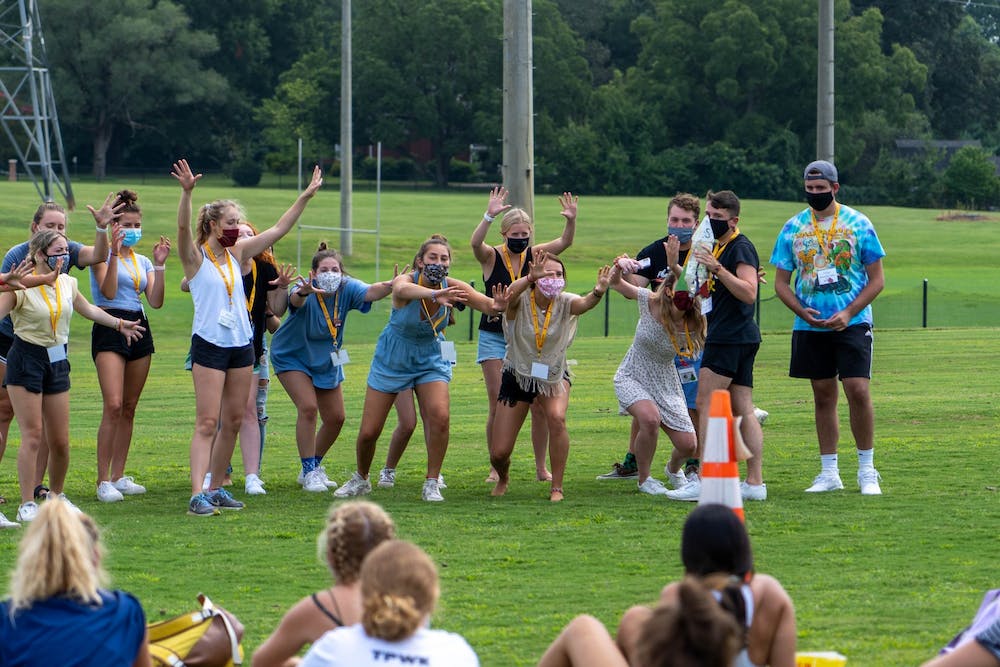 Photo by Clare Grant | Elon News Network
Orientation leaders during their training week on the intermural fields on Aug 13, 2020.

Senior Cameron McCrary has been involved in New Student Orientation for the past three years. She started as orientation leader and is now a student coordinator. McCrary has the responsibility of building training for the orientation team and facilitating breakout sessions. Through this position, she has also helped to make orientation better fit Elon’s coronavirus policies.

For the past few weeks, the New Student Orientation team has been preparing for the class of 2024 to arrive on campus. With the regulations placed by the state and university, McCrary said the team has had to do a lot of remodeling for the program.

“Adapting content to work with new guidelines of physical distancing and smaller groups while trying to finalize plans on a deadline was one of the biggest challenges we faced,” McCrary said.

Orientation typically consists of several large group presentations and events. In an attempt to keep everyone safe and healthy, the program will be a hybrid of online and in-person group sessions.

“Sessions will be facilitated by the orientation leaders in smaller groups using virtual platforms to connect and engage new students,” McCrary said.

These sessions will include both prerecorded videos and small group conversations, making the experience much more intimate.

The team has also utilized the New Student and Transition Programs social media accounts to inform students about orientation. These programs feature a wide variety of content as part of their “Elon Bound” series, which aims to further educate incoming students about what Elon has to offer.

Even with all of these changes, McCrary is confident the program will be able to provide the same outcomes.

“We hope this will still be a program that engages students and encourages them to lean into the new norm with connections from peers that will support them through this time, ” McCrary said.

Director of New Students Emily Krechel has been working with students such as McCrary on the planning of orientation this year. She believes this new way of orientation will only help to promote Elon’s values of engaged learning.

“Students have to participate. They will be expected to be engaged. There are a lot more opportunities to connect with their peers and student leaders, which is really exciting, ” Krechel said.

Along with the challenge of eliminating large groups, Krechel said finding spaces across campus was also difficult.

“We needed 111 spaces for our small groups to meet, which means we have several groups using locations such as Schar Center and Alumni Gym, which we have never used before,” Krechel said.

One event in particular that is experiencing a major change is convocation. Instead of being held Under the Oaks it will be livestreamed from Alumni Gym this year. Only a few groups will be in-person for the event; the rest will watch it remotely.

Orientation will begin Aug. 16 and continue until the first day of classes.