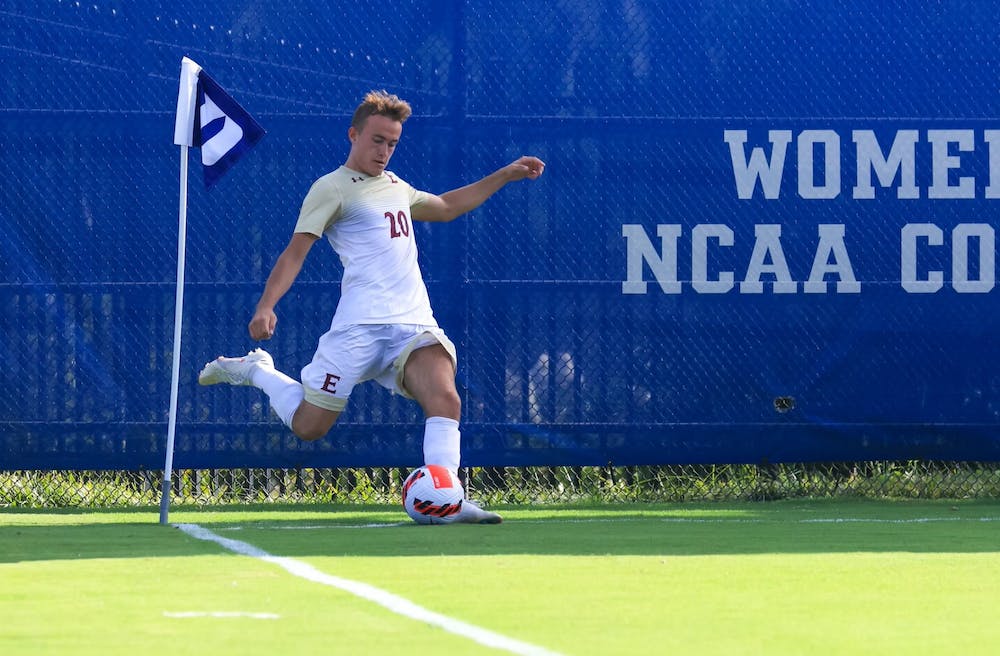 Vatne, a Norway native who moved to America this August and is still learning English, took advantage of the moment, ripping the free kick into the back of the net to score his first college goal and tie the game for the Phoenix.

“I practice my free kicks after every training with some of my teammates and I just did what I’ve done in practice and luckily it went in,” Vatne said.

Less than three minutes later, senior forward Jack Edwards scored on a header to put Elon in front for the first time. The Phoenix locked down the Warriors for the remainder of the second half to seal a 2-1 opening day victory at Duke University’s Koskinen Stadium in Durham, North Carolina.

Kicking into the lead

Despite leading the game for just over eight minutes, the Phoenix generated consistent offensive pressure throughout the contest. The team fired 12 shots, five of which were on goal, and had five corner kick opportunities.

Vatne said the team played a great game and liked how they rallied after allowing the first goal.

“It shows character to get back after conceding first and I’m really proud of the team,” Vatne said.

Head Coach Marc Reeves said the Phoenix generated the better scoring chances in the first half despite not finding a goal and was pleased with how his team responded after getting shutout in the first half.

“We just kept saying, kept preaching to stay with it and have more quality in key moments,” Reeves said. “We just said that if we keep creating those, one of them’s going to go in.”

Reeves said the Phoenix’s depth was key to taking over the game in the second half, as the team utilized six players from its bench throughout the game to ensure there were “fresh legs” in the end.

“As a group, we wore them down a little bit with our depth at certain positions,” Reeves said. “We had a few guys come in and play some really key minutes and on opening day, you need that.”

Other standouts for the Phoenix included junior forward Mason Duval, who had three shots, and junior defender Kasper Lehm, who assisted on Edwards’ game-winning goal.

The game was physical and chippy from the start, with the two teams combining for 25 fouls and three yellow cards, all of which were handed out to Merrimack players.

For Reeves, a come-from-behind opening win over a program like Merrimack, which has had a winning record in eight of the last nine seasons, is a great way to start the season.

“An opening day 2-1 win having been behind 1-0 and having to show some character in spots is a great thing. I’m pleased,” said Reeves.

Vatne said that if the team can continue to generate quality offensive chances like they did through the preseason and against Merrimack, they will have a successful campaign.

The Phoenix hosts the Liberty Flames on Monday, Aug. 30 in its home opener. The game is set to begin at 7:00 p.m.