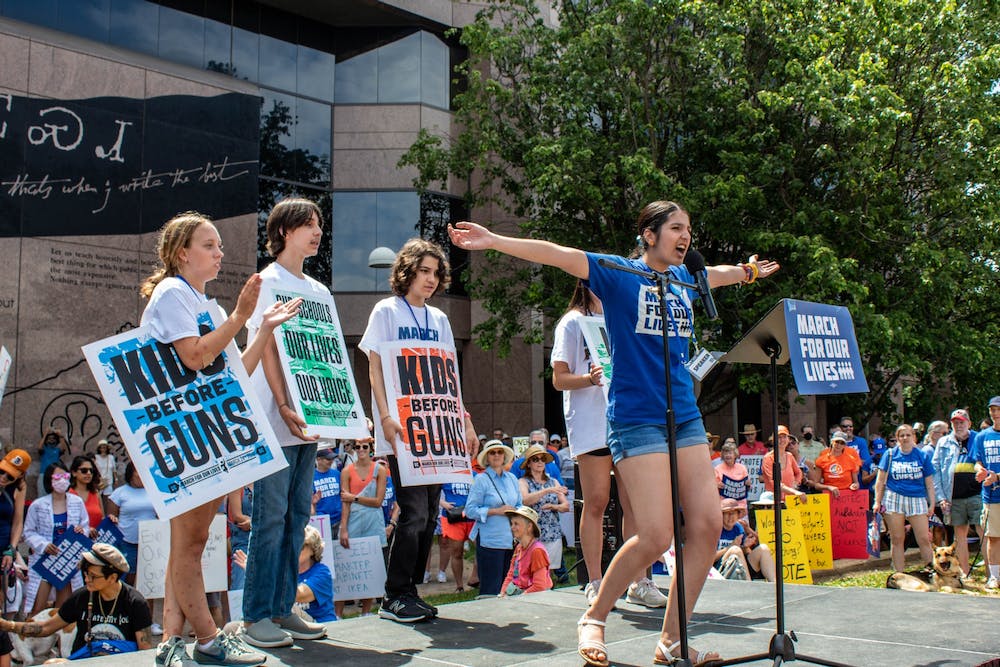 It has been 1,578 days since the mass shooting at Marjory Stoneman Douglas High School that sparked the youth-led March for Our Lives movement. 1,540 days after the first demonstration, thousands of people gathered once again Saturday in Raleigh, Washington D.C. and across the country to protest a recent string of national gun violence.

The June 11 marches come after mass shootings at a medical building in Tulsa, Oklahoma, June 1, Robb Elementary School in Uvalde, Texas, May 24 and a supermarket in Buffalo, New York, May 14 — just three of more than 200 mass shootings in 2022 so far.

Organized by Marjory Stoneman Douglas High School students after the shooting in Parkland, Florida, the first March for Our Lives demonstration was one of the largest single-day protests against gun violence in U.S. history, according to the movement’s website. Over the last four years, survivors and activists nationwide have worked to enact legislative change.

Tomorrow Laura McDow will graduate high school, and instead of celebrating the achievement today, she’s calling for change.

McDow, one of the organizers of today’s protest, has been involved with the North Carolina chapter of March for Our Lives since 2018.

“I am a high school senior, and I’ve spent formative years living through lockdown drills and experiencing the effects of gun violence and mass shootings,” McDow said. “It’s important to me that people feel that they have an outlet to express their anger and their frustration.”

After the Uvalde shooting, McDow noticed people were feeling helpless. For her, the goal of the rally was to help channel that helplessness into action.

McDow voted for the first time this year and said she, along with thousands of others, want their “elected officials to know that this is ridiculous and outrageous and that they can’t just continue with their inaction.”

Jenna DeCandio came to the protest not just as a supporter, but as a survivor of gun violence. DeCandio and her family were at the 2017 Route 91 music festival in Las Vegas when she was shot.

“I was like a lot of the country, very passive, like, ‘Yeah, this needs to change, I don’t agree with what’s happening,’” DeCandio said. “Having it directly change the course of my life is very impactful.”

DeCandio stood in solidarity today with the hope that other people will never have to experience what she did.

“I am very fortunate that I’m still here,” DeCandio said. “It's really unfortunate that was in 2017, and things have not changed. It’s time to make change, so that’s why I’m here.”

Since Uvalde, Breanna said she’s cried a lot, fearing this is something that could happen at her daughter’s school. The pair were driven to change and attended the protest with their children.

“I’m just fed up with the lack of progress on what is a public health issue,” Wallace said. “We need to tell our representatives at every level that they need to act, they need to fix this problem, they need to protect our children. This is ridiculous.”

Wallace attended the protest with his son, Davis, a high school student.

“I feel like we shouldn’t have to have school shooting drills at school,” Davis said. “Why is that even a precaution that we need to take? You don’t have to feel like you’re unsafe when you go to school.”

Megan Sulinski, an Elon University senior, is studying elementary and special education, with a minor in teaching English to speakers of other languages — something she said makes the issue and recent rise in gun violence and mass shootings more personal.

“Going into education, you'd never expect to have to deal with these types of situations,” Sulinksi said. “It's obviously heartbreaking for all the kids, and their families and the community. It's definitely very scary to think about that.”

Soon, when Sulinski has her own classroom, she said risking her own life to protect her students is a very real possibility she will have to face.

“Looking at the teachers that have to deal with it — I would have done the same thing,” Sulinski said.

Sulinski believes it is paramount for the country to have thorough background checks and raise the minimum age to purchase semi-automatic rifles.

“I'm in a stance where, as an educator and just a regular civilian, I understand that everyone has the right to bear arms and that's part of our country,” Sulinski said. “But it's a little scary when there's not enough laws to stop things like semi-automatics.”

Like Sulinski, Elon alumna Chloe Yoon ‘22 said she believes there is an unfair burden placed on teachers to protect their students from gun violence.

Yoon, who graduated with a major in secondary English education, will begin as a high school teacher during the upcoming 2022-23 academic year. She said while it is heartbreaking as a future educator to see tragedies such as school shootings, she also struggles with the government’s continued inaction after these events.

“Instead of taking that responsibility, they're putting it on teachers and saying, ‘No, teachers should know how to arm their classroom and be prepared for a shooter,” which I think is completely unfair,” Yoon said. “That was never in our job description.”

Becky Ceartas, executive director of North Carolinians Against Gun Violence, was also at the protest today. She joined the organization as a scared new mom after the shooting at Sandy Hook Elementary in 2014.

She said the goal of the organization is to work with “good legislators” who are “going to do the right thing.”

At its inception about 25 years ago, the organization was the only statewide nonprofit of its kind. Now, it is one of many. The organization has worked to stop “bad legislation,” according to Ceartas, including the attempt to arm teachers and get rid of concealed carry laws.

Today is one of many steps to create change, for Ceartas and McDow. They hope their vision for the future of the U.S. will be reflected in the election this November.

In the coming months, lawmakers will vote on legislation surrounding gun violence and access to firearms.