Two students connected to the Parkland, Florida, shooting find their own ways toward healing 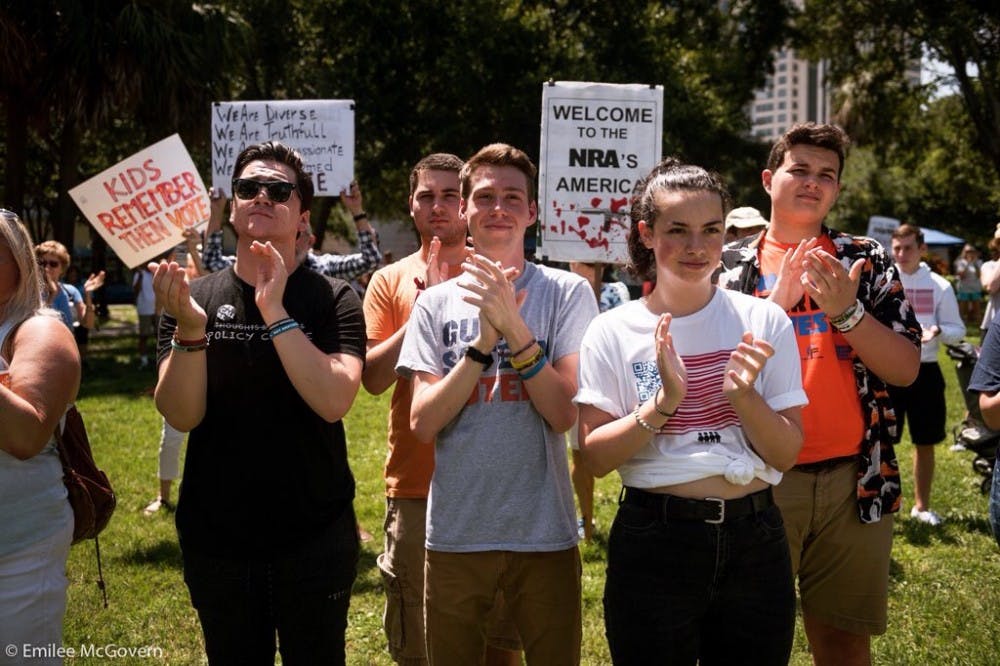 Almost 800 miles north at Elon, Brendan watched the events unravel at his old high school, Marjory Stoneman Douglas High School, where his brother was a freshman at the time.

“I was freaking out,” Brendan said.

Daniel stayed hidden in a closet, leaving his phone unattended and unanswered.

Seventeen students and teachers were killed that day, and while a country mourned for the loss of yet another group of innocent people become victims of gun violence, two Elon University students were mourning their friends and classmates.

Lending a hand and stepping in

After speaking with his mother who was a substitute teacher the next morning, she told Brendan he needed to come home.

“She was like, ‘You just have to come back, you just have to be here for at least the weekend.’ That’s the only push I needed. So, I drove down immediately. It was a full 12 hours, but I just went for it.”

During his drive to Florida, Brendan spoke to friend Cameron Kasky, who is one of the faces of the March for Our Lives movement, of which Brendan is a co-founder.

The movement’s goal, outlined on their website, says “The mission and focus of March For Our Lives is to assure that no special interest group or political agenda is more critical than the timely passage of legislation to effectively address the gun violence issues that are rampant in our country. We demand morally-just leaders to rise up from both parties in order to ensure public safety.”

Kasky had just secured an interview with Anderson Cooper – it was barely two days after the shooting, and Kasky was overwhelmed.

Brendan said that Kasky felt uncomfortable with all the interview opportunities because of the subject matter, but he felt that people were starting to pay attention because of the proximity of Parkland.

“It seems like every couple months or so, another mass or school shooting pops up, and

that community gets really activated and passionate about this issue,” Brendan said. “And it feels like they’re calling to the wind.”

Brendan recalls that Kasky told him they were not going to give into that cycle. Therefore, Brendan and Kasky began to use social media as a platform to share that message. After noticing Kasky was overwhelmed with interview requests, that is when Brendan jumped in. He quickly took on the role of liaison between the survivors and the media. Initially, he was arranging interviews and helping in any way he could, but he now serves as Communications Strategist for the movement.

“Especially with being a strategic communications major and having done a public relations internship before, I was totally comfortable dealing with the media,” Brendan said. “They didn’t need that extra weight on their shoulders.”

Creating March for Our Lives

But Brendan had to return to Elon and was able to organize remotely for the time being. The group worked on formulating 10 policy points that they thought were “the best way to save lives,” Brendan said.

“[People] were extremely supportive on social media, but that was kind of the extent of what we were seeing,” Brendan said. “We figured that the best way to really get in touch with people and enact change and get these legislation pieces passed was to inspire and elect morally just leaders that were going to be able to have a say in this and put their voice in and use this to get common sense gun legislation passed.”

Brendan says that the March for Our Lives movement is completely non-partisan because for him bullets don’t discriminate.

“We had another mass shooting in Jacksonville just the other day,” Brendan said. “We’ve had three mass shootings in Florida in the last two and a half years, and it’s like, at some point we have to realize that this is an issue that is a little more serious and kind of transcends normal politics.”

Freshman Kali Clougherty was a senior at Stoneman Douglas and is one of the survivors of what was the 29th mass shooting in 2018 alone, according to gunviolencearchive.org.

Clougherty, while grieving and coming to terms with the events of Feb. 14, had to continue to focus on college. After auditioning for 13 schools in hopes of pursuing an education in musical theater, she hit a roadblock in that for most of her auditions she was sick and unable to perform at her best. Elon was the only school that accepted her, but her audition for Elon fell on the same day she and her classmates were to return back to Parkland after the shooting.

“I just had to go back to school,” Clougherty said. “I emailed them and told them I couldn’t come to the audition and explained why, and I asked if I could audition another day or send in a video.”

Clougherty sent in videos to the Musical Theatre department and knew her chances of getting accepted were slim because “they never accept people over video.” But she was the exception.

In the weeks that followed, Clougherty performed at the Tony Awards where she and her drama classmates sang to honor their drama teacher, Melody Herzfeld, who saved 65 students on the day of the shooting and was given the award for excellence in theater education.

And the note Clougherty hit during her solo, which was watched and praised by thousands after the Tony Awards, almost didn’t happen.

Clougherty explained how hectic things were right before the performance and how she couldn’t hit the note because she was sick.

“Right after we got off the plane, we went straight to the studio to rehearse in front of everyone,” Clougherty said. “I didn’t hit the note in the rehearsal. I was so worried.”

Clougherty says she ate chips, honey and tea and honey and tea which are meant to help her throat. The next morning, she had her voice back but still could not hit the note in dress rehearsal the day of the Tonys Awards.

Though many were talking about her performance in the days that followed, Clougherty says she did not do it for the fame.

“It was because my teacher won an award,” Clougherty said. “It was because 17 people died at my school. I felt honored to be able to be a part of that and share our story and our light with the world.”

Like many of her classmates, Clougherty jumped on board with March for Our Lives after the shooting, but she soon found it hard to give herself to the organization while also focusing on her own healing and the healing of those closest to her.

“I wanted to get involved because I was like, ‘I can’t just sit back and do nothing,’” Clougherty said. “But once I had gotten involved, it was so emotionally draining. I wasn’t taking time to grieve.”

Her boyfriend and family were still suffering as well, and she said she “had to just take a step back one day.”

Clougherty stands behind her classmates’ efforts in the March for Our Lives and has found comfort in another organization, Shine, which was started by the Stoneman Douglas drama club.

In the wake of the tragedy that struck so close to home for Clougherty, she says her hope is that people become better at listening to one another.

“I think it needs to come down to agreeing to disagree and respecting everyone’s opinions and listening to each other,” Clougherty said. “The misconception about March for Our Lives is that they’re trying to take away the Second Amendment, which is not true at all.”

Clougherty says the movement is not against people wanting to protect themselves, but rather they do not support people owning AR15s or large guns that can harm people like on Feb. 14.

Making change across the country

The Road to Change tour, which Brendan has been a part of, has visited 30 states and every congressional district in Florida. He says while there are people who are opposed to what he and his friends stand for, they always try to listen to the other side.

“It’s the painful, difficult conversations that make the most progress,” Brendan said. “Be willing to have those open conversations with people and achieve a common ground. Instead of listening to people to respond, listen to people to understand.”

While on the Road to Change, Brendan has come across counter-protesters and organizations. But after talking to them and finding common ground, he was able to clear up misconceptions.

“That’s what we’re preaching,” Brendan said. “Have those difficult conversations, stay involved and keep the conversation moving forward because even though it’s obviously not the most fun conversation in the world, it’s an important one.”

Brendan said one of the main goals this summer was getting people out to vote. And they have already seen the direct impact that their work has done, especially in Florida.

“We’ve seen in our home county, in Broward County, there has been double the voters that they’ve ever had. Record-breaking numbers,” Brendan said.

Brendan said that in Orlando, there have been record-breaking numbers; in Miami Dade County, 110,000 more people came out to vote for a midterm election primary.

The hope for the organization now is to continue with the momentum they have made. Brendan has taken the semester off from Elon to continue to work with the organization. He is not the only one who has put the rest of their life on hold to work with March for Our Lives full-time. Brendan says he and others realized “there is so much more riding on this” than just themselves.

Over the next few months, March for Our Lives’ goal is supporting all of the local chapters that have been created around the country in addition to increasing voter turnout, especially among young voters.

Eventually, Brendan says the hope is to have statewide chapters that “trickle down” into counties, and the end goal is to have local universities serve as a hub for students to meet. There is a Greensboro chapter that held a recent rally over the summer that was successful according to Brendan.

The Greensboro chapter has reached out to Clougherty as well to see if she would want to be involved in some way. She says while she doesn’t know how yet, it is something she would be interested in if her schedule allowed.