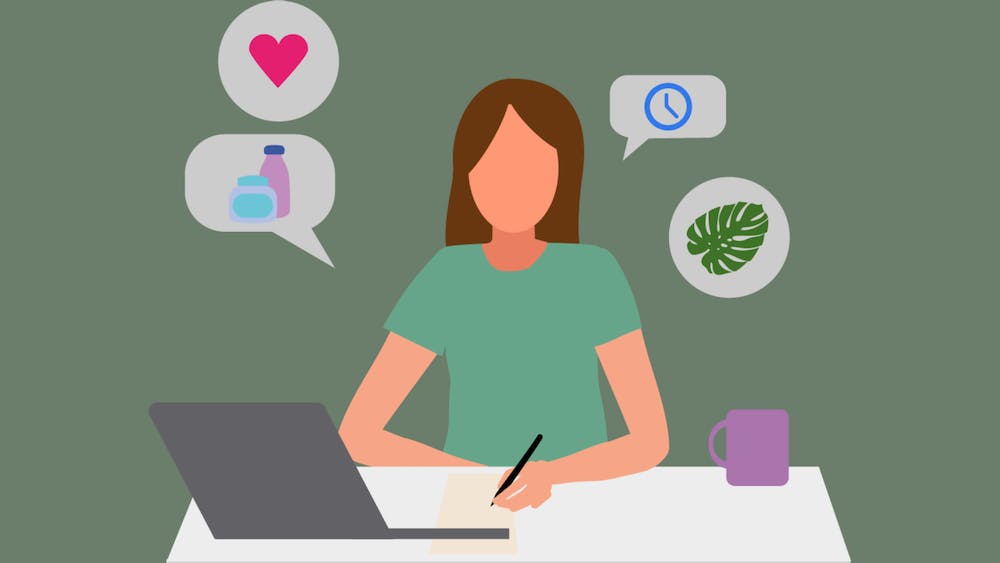 Instead of pulling all-nighters and hitting the books this exam season, freshman Hillary Collins is hitting the hay — a practice she began before coming to Elon University.

With finals beginning May 12, Collins and other students across campus are preparing for exams, research papers, projects and presentations. But while academics are important for her, Collins is also prioritizing self-care.

“How I practice self-care is not pushing myself too hard,” Collins said. “It’s OK if I’m not perfect at everything. It’s not the end goal. Give yourself some leeway because college is freaking hard, and it’s difficult, and it’s stressful.”

Similar to Collins, junior Trevor Molin is making sure numbers and grades don’t define him. Molin said he’s had recent discussions with his therapist about battling perfectionism, especially in a college setting.

“It’s important for us to make sure we understand what we can and can’t do during finals season and not overwork ourselves,” Molin said. “It might be worse if we’re not making sure that we’re healthy and well through that process of potentially getting that good grade.”

Self-care is defined by the Global Self Care Federation as the practice of taking care of one’s mental and physical health and practicing a healthy lifestyle by relaxing, meditating and being active.

Self-care can be beneficial because it gives people the convenience of looking after themselves and improving the quality of their life without much outside help.

According to a 2020 survey conducted by the Harris Poll from the Samueli Integrative Health Programs, 80% of U.S. adults said they will be more mindful about practicing self-care on a regular basis “once the pandemic is over.” The survey also found 46% of U.S. adults struggle finding ways to maintain their overall health.

As studies show that Americans are increasingly focused on self-care, Molin hopes people recognize its importance.

“I think that the reason that the self-care movement has gotten so much traction is because it is speaking to something very real,” Molin said.

At the intersection of self-care and academics is time management. Collins said her schedule quickly filled up this year as finals came around, and she recommends other students plan more to avoid unnecessary academic stress.

“Don’t take your time for granted,” Collins said. “Plan every single day out, every single second, every minute, if it helps.”

Professor of statistics Ryne Vankrevelen said dedicating a little bit of time to studying every day instead of cramming during one long study session can make retaining information easier, as consistent consumption gives the brain more chances to remember information.

“If you are thinking about studying eight hours on one day, you’re better off studying two hours on four days,” Vankrevelen said. “Part of good studying involves practicing retrieving information you’ll have on an exam, so that spaced-out studying gives you a chance to say, ‘OK, I looked at this the other day, now do I remember it on the next day?’”

To make finals season run smoothly, especially when he gets overwhelmed, Molin finds that being transparent about assignments and exams with professors is crucial.

“Talking with professors and being open about your situation can be really helpful, especially for me in the past, to better understand what they’re looking for,” Molin said.

Accounting professor Catherine Chiang said students can find out what professors want by looking at their syllabus for information about the final, utilizing any provided study guides and, most importantly, looking back at past assignments and exams.

“Gather all the previous exams and the graded assignments and look over problems that were marked wrong, because what I found is that sometimes students do not look at the previous exams,” Chiang said. “When I give them the same questions, they still make the same mistakes. Learn from your mistakes.”

The American Psychological Association has found that cramming information during a study session does not have many benefits — students can remember the information for a short period of time but are unable to retain it. Studying over a longer period of time is much better on the brain and can result in better mental health, according to the APA.

Leading up to finals, Molin said he determines how much work he needs to put in for each class so he doesn’t overwork himself.

“One thing for me has been looking back reflectively on the work that I put into the classes that I’ve already taken and seeing what that might mean for how much work I need to put into finals,” Molin said. “I think there’s some classes that I’m doing a lot better in that I might not have to prioritize as much because I have a little bit more leeway.”

When studying sessions begin, instead of simply rereading PowerPoints and notes, Vankrevelen suggests other study methods such as verbalizing the material and creating examples relevant to the content.

“Explaining to someone the steps that you took can be really helpful,” Vankrevelen said. “That could be going into office hours or just studying with a friend and saying, ‘OK, let me talk you through what I did in this problem.’”

As the school year comes to an end, Molin said he wants students to remember their well-being always comes first.

“The centering of our mental health and wellness is obviously important all the time,” Molin said. “When it gets toward the final season where we have so much work to do with so many different classes, sometimes I think that there is this mindset a lot of people have where classes always come first — I think even before classes, we come first.”