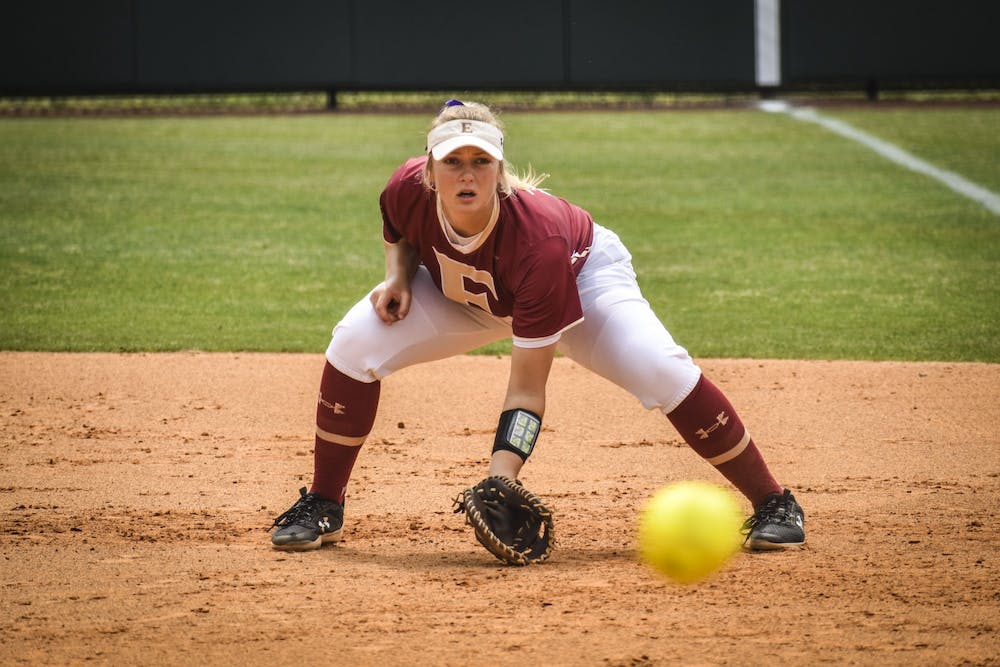 
Senior first baseman Keagan Goldwait waits for the ball to come to her at first base on May 6 against North Carolina Central University.

In a game canceled after less than five innings due to thunderstorms, the Elon University softball team held a 5-0 lead in its final regular season game against the North Carolina Central University Eagles. However, due to the weather, neither team was credited with a win or loss.

Elon was originally scheduled to play a three-game series this weekend against James Madison University, but it was canceled following the death of James Madison player Lauren Bernett on April 25. On Tuesday, Elon announced it had scheduled this game against Central to give Elon’s seven-player senior class a Senior Day.

Head coach Kathy Bocock said scheduling a game to honor the team’s senior class was important to her.

“This class has been through a lot,” Bocock said. “I was like, just let us get the recognition and let us play some innings, and it worked out and ended up being a good day.”

Elon started six of its seven seniors, as only pitcher McKenzie Weber did not start. For senior center fielder Rebecca Murray, it was special to start alongside the team’s other seniors.

“It was a pretty cool moment,” Murray said. “They’ve been here since my freshman year, so just being able to go out on the field with them by my side was a special opportunity.”

After another scoreless inning from Hoover, Elon scored two more runs in the bottom of the second, as junior shortstop Bella Devesa hit an RBI single and scored later in the inning on a fielding error by Central, putting Elon ahead 5-0.

Elon beat Central 7-0 on March 22 but struggled early in the game, as the team did not score in either of the first two innings. Murray said the team had more energy early in this game, which resulted in a better start.

“We really wanted to play for each other and play for the seniors, so coming out with that high adrenaline and just being ready to play was a little different than last time we played Central,” Murray said.

Weber, Elon’s other senior pitcher, entered the game in the third inning. In the bottom of the fourth, the game was suspended due to rain and a severe thunderstorm warning. The delay lasted for over a half-hour as rain and hail drenched Hunt Softball Park.

Because of the threat of lightning, the basepaths could not be tarped, and as the precipitation picked up, the field became too wet to finish the game. The game was officially ruled over at 4:42 p.m..

Despite not being able to finish the game, Bocock said the nearly five innings Elon completed today will help keep the team sharp prior to next weekend’s Colonial Athletic Association Tournament, which Elon will host from May 12-14.

“We’ve been practicing, and we could have scrimmaged ourselves, but it was good to have another game against somebody else so that we could keep things as normal as possible,” Bocock said.

This year’s senior class was part of Elon’s 2019 team that qualified for the program’s first ever CAA championship game. Bocock said they have made a strong impact on the program and she is excited to see what they do after graduating.

“A lot of my alumni, they’ve done such great things, and now they’re going to joining all those other alumni that have done great things for the program,” Bocock said.

All Elon players and coaches wore purple and gold ribbons during the game to honor Bernett, who reportedly died by suicide.

“We’re keeping them in our thoughts and prayers,” Bocock said. “As far as the college softball world and just athletes in general, we’ve just got to remember that there’s somebody out there that can help you, and you don’t have to go through struggles by yourself.”

Elon finishes its regular season with a 27-20 record and will play its first two games in the CAA Softball Tournament, which has a double-elimination bracket, on May 12. Elon’s seed has not yet been determined.