With a 5-0 victory, Elon makes it through its first game of the double elimination tournament 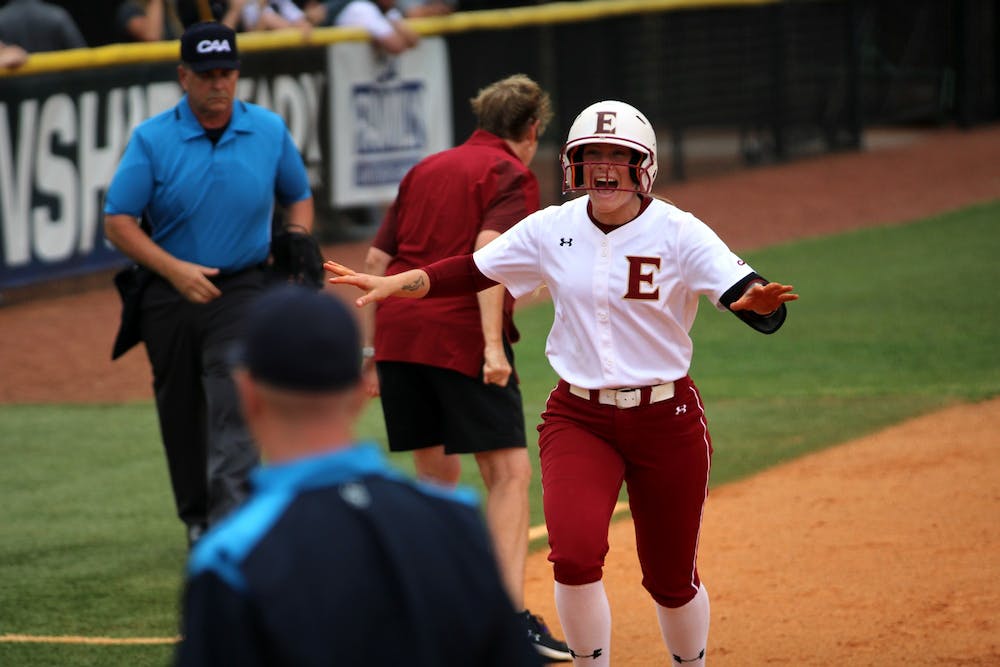 
Freshman third baseman Allee Seering rounds the bases after hitting a home run in the bottom of the fourth inning against College of Charleston in Elon’s first game of the Colonial Athletic Association Softball Tournament. Elon won 5-0.

The Elon University softball team kept the College of Charleston Cougars scoreless in the opening game of the Colonial Athletic Association Softball Tournament, winning the game 5-0.

“We really capitalized on some of their mistakes but we got people on base so we were able to do that and we had some timely hitting,” head coach Kathy Bocock said.

Scoring opened early for the Phoenix in the first inning. With two outs, senior center fielder Rebecca Murray got on base due to an error by the Cougars’ second baseman. Junior catcher Carley Davis stepped up to the plate and managed to hit a single that got her on base. Murray used her speed when rounding third to challenge home plate, sliding in safe to put the Phoenix on the scoreboard first.

Scoring would pause until the third inning, when junior second baseman Megan Grant got on base with two outs once again. Murray came to bat and hit a ball to right field for a triple, allowing Grant to score. In the next Elon at-bat, Davis once again put the ball in play to earn her second RBI as Murray cruised home to put the Phoenix up 3-0.

In the bottom of the fourth inning, the bottom of Elon’s batting order was able to get involved in the scoring mix. Once again with two outs, senior first baseman Keagan Goldwait got on base through a walk, setting the stage for freshman third baseman Allee Seering. Going the other way, Seering sent the ball long towards “home run hill” in left field, bringing Goldwait home with her as they made their way around the bases.

“There’s a lot of pressure obviously, I mean, the CAA tournament it's a little bit of a different feeling,” Seering said. “Sticking to what my coach has been teaching us about making those adjustments pitch by pitch, what I was doing from my first at bat and being able to make those adjustments like she said really put me in a good place.”

Starting Phoenix pitcher, freshman Taylor Cherry, allowed just two hits in 20 batters seen by the time she was subbed out after five innings. She said that her pitching performance today could be credited to the energy she felt from those behind her.

“We brought the energy early and scored early and we were able to work pitch by pitch,” Cherry said. “[We were] making sure that every miss that I had, they were there for me to make that play.”

With the win, Elon is set to play the number one seeded University of Delaware Blue Hens at 4 p.m. The last time the Phoenix played the Blue Hens was at Delaware, as Elon was swept in a three game series. Bocock said she sees this game going differently.

“We’re getting to play them at home and we like that,” Bocock said. “When we went up to their place, we didn’t play as good as we had the capability to, so we’re just ready to get started.”