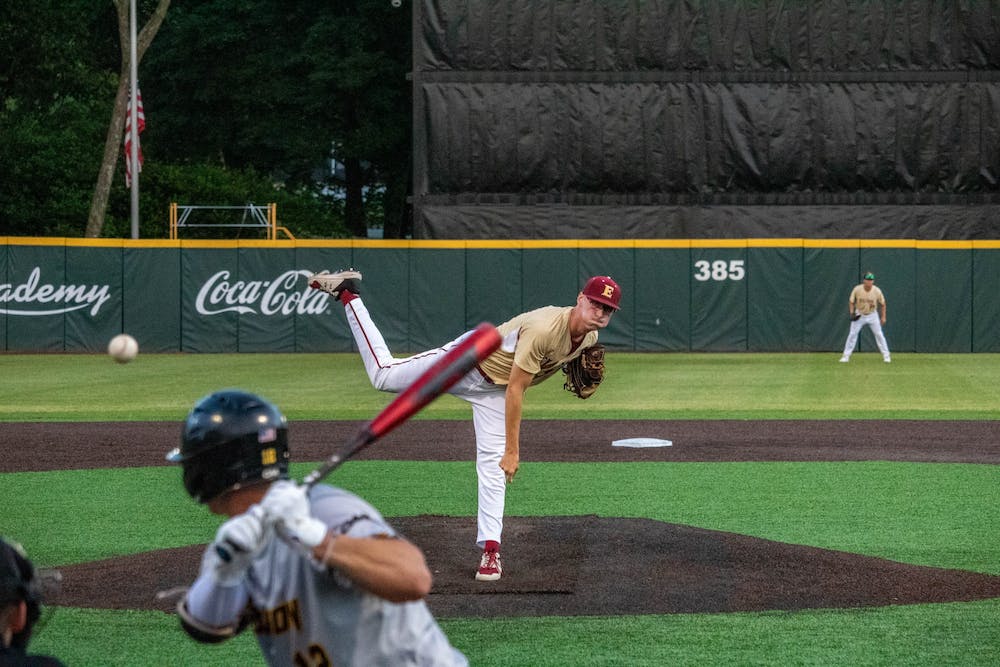 With the bases loaded in the bottom of the first inning, Granatell stepped to the plate with a chance to break a scoreless tie. On the second pitch of the at-bat, he did just that, sending the ball to deep left field for a grand slam, the first one for Elon this season. The home run was only Elon’s fourth in CAA play.

After losing 12-6 to last-place Towson yesterday, head coach Mike Kennedy said taking a 4-0 lead in the opening inning was huge for the team’s confidence.

“Coming off that loss yesterday, everybody’s kind of got a little bit of anxiety and going, ‘Hey, we really need to win this thing,’” Kennedy said. “To get four early just took a bunch of pressure off of us, no doubt about it.”

The opening inning grand slam was just the beginning of Granatell’s stellar day at the plate. He hit a leadoff double down the left field line to open up the fourth inning and then hit his second home run of the game in the seventh, which scored two runs. He added another RBI on a single in the ninth to finish the day with seven RBI.

“We had a good game plan as a team coming into the game,” Granatell said. “We wanted to attack pitches early, see the ball well, get more hits and hit more hard balls.”

Freshman Shea Sprague started on the mound for the Phoenix and pitched four shutout innings before allowing two runs in the top of the fifth. After Sprague’s beginning the season as a reliever, Kennedy said he has been impressed with his performance as a starter in recent weeks.

“He’s taken this role and run with it,” Kennedy said. “Every time he goes out there, he gives us a chance to win.”

Despite Granatell’s dominant day and Elon’s strong offensive performance, Towson did not back down. After scoring a pair of runs on Sprague in the fifth to make the score 5-2, Towson added another in the sixth to make it 5-3. Elon responded with two runs each in the sixth and seventh, but Towson again answered by scoring three runs in the eighth to make the score 9-6.

Towson tallied 11 hits on the day compared to Elon’s 12. Even though Towson entered the game with a 2-17 conference record, Kennedy said the team’s record is not reflective of its talent at the plate.

“That’s a pretty good club offensively. I know their record is not very good, but they can hit a little bit, and we knew that,” Kennedy said.

With Elon’s lead down to three runs in the bottom of the eighth, sophomore first baseman Cole Reynolds delivered his third hit of the day to score redshirt sophomore right fielder Alex Iadisernia and make the score 10-6. Reynolds, who also had three hits in yesterday’s loss, has struggled at the plate this season, but Kennedy said the team needs Reynolds to continue this strong form at the plate for the team to make a run in the upcoming CAA Tournament.

“We’re going to need those guys, and certainly Cole is very capable,” Kennedy said. “It’s in there, maybe that’ll give him some confidence.”

Granatell’s seventh RBI two at-bats later put Elon ahead 11-6, and sophomore pitcher Ben Simon closed out the game in the ninth to seal Elon’s ninth conference win of the season.

The Phoenix clinched a spot in the CAA Tournament with the win and would be the fifth seed if the season ended today. Elon started CAA play with a 3-9 record but has won six of its last eight conference games. Granatell is hopeful Elon can continue this recent run of form into the CAA Tournament.

Elon hosts William & Mary for a three-game series next week to close out the regular season. The first game is scheduled to begin at 6 p.m. on Thursday.