Elon will host the CAA Women’s Tennis Tournament this weekend 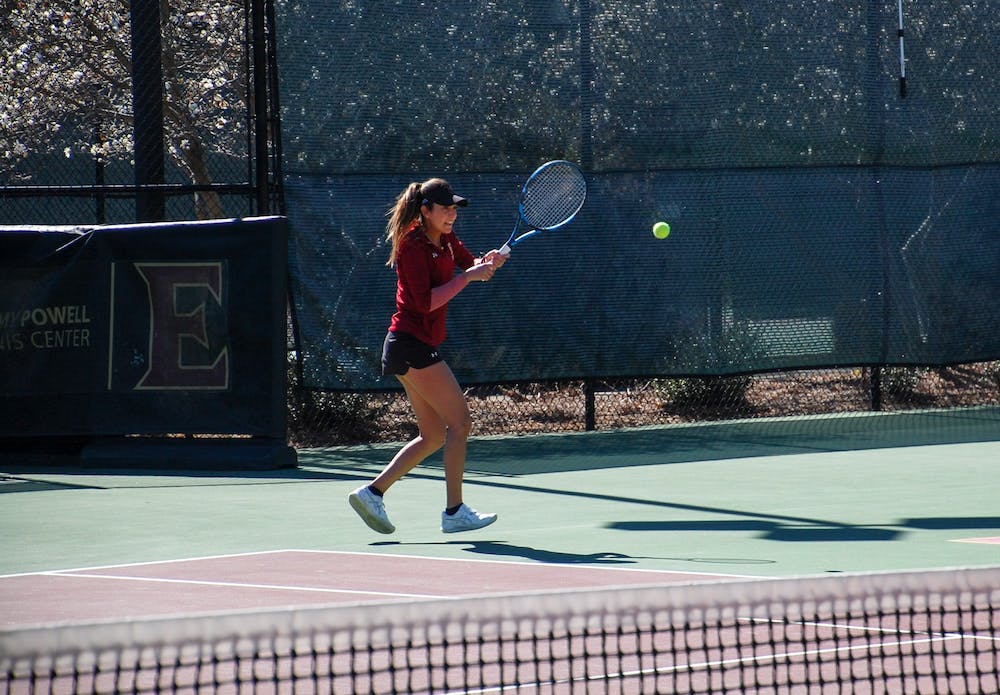 
Sophomore Lizette Reding plays doubles against Presbyterian College on Feb. 20. Reding and her doubles partner Sibel Tanik won their match with a game score of 7-5.

When sophomore Lizette Reding steps on the court at this weekend’s Colonial Athletic Association Women’s Tennis Tournament, she expects to feel several emotions upon seeing the home crowd.

“I’ll be excited. I’ll be afraid a little bit,” Reding said. “A little bit of pressure, nerves, but it’s nothing that I can’t handle.”

For the first time since 2019, Elon will host the CAA Women’s Tennis Tournament from April 29 to May 1. Eight of the conference’s nine women’s tennis teams will compete at the Jimmy Powell Tennis Center in a single elimination bracket to decide the champion of the conference (James Madison University is banned from all CAA championships this season due to its impending move to the Sun Belt Conference). The winner will earn an automatic berth in May’s NCAA Tournament.

Elon finished the regular season with a 15-8 record, including a 13-1 mark in home matches. For junior Sibel Tanik, having the tournament at Elon’s home tennis courts is a big advantage.

“We really just love the energy of Elon and want to be able to defend Elon and play for our school and our name,” Tanik said. “When you play at home, you always have that feeling of just wanting to perform to the best of your ability especially when your friends or family are around.”

The team finished the season strong, winning six of its final eight matches. However, the two losses came against James Madison and William & Mary, both of which are conference opponents.

Tanik said the conference is very balanced this season from top to bottom in terms of teams competing, and that there will be no easy matches for Elon during the weekend.

“Everyone is at or near a good level,” Tanik said. “We are thinking about one match at a time and going into Friday and getting through that match the best we can and not thinking about who we’d play next or who is winning where.”

“They played amazing, they had great intensity and the crowd was amazing,” Reding said. “I feel very excited to play this weekend and we will be trying to copy them.”

This will be Reding’s second CAA Tournament, as she went 2-1 in her matches in last year’s event in Williamsburg, Virginia. For her, there is more pressure in the lead-up to this tournament compared to a regular season match.

“It’s good to have nerves because we care about it but as soon as we go onto the court, we’re going to leave all those nerves and worries behind us,” Reding said.

According to Tanik, Elon will have a light week of practice to preserve energy for the tournament, with players  focusing on staying hydrated, getting lots of sleep and stretching throughout the week to be ready for the physical demands of the event.

“The match is won before you’re even on the court,” Tanik said. “You can control how much water you drink, how much sleep you get and how much stretching you do the week before.”

While physical preparation is important, Reding said the team will also spend a lot of time on mental preparation this week to be ready for the loud crowds and pressure situations. The team also plans to  enjoy the magnitude of the tournament.

“We want to remind ourselves how special we are and how much we deserve to be here in this moment,” Reding said. “Let’s make this weekend amazing. Whatever the result is, we are going to be happy at the end because we know that we are going to leave everything on the court and we will have nothing left.”

Elon is the number four seed in the tournament and will the University of North Carolina Wilmington in its quarterfinal match on Friday at 11 a.m. Elon defeated Wilmington 5-2 on March 26. The semifinal matches will take place on Saturday and the championship match will be Sunday at 1 p.m.