Phoenix shot second round 288, improve on first round score by six shots 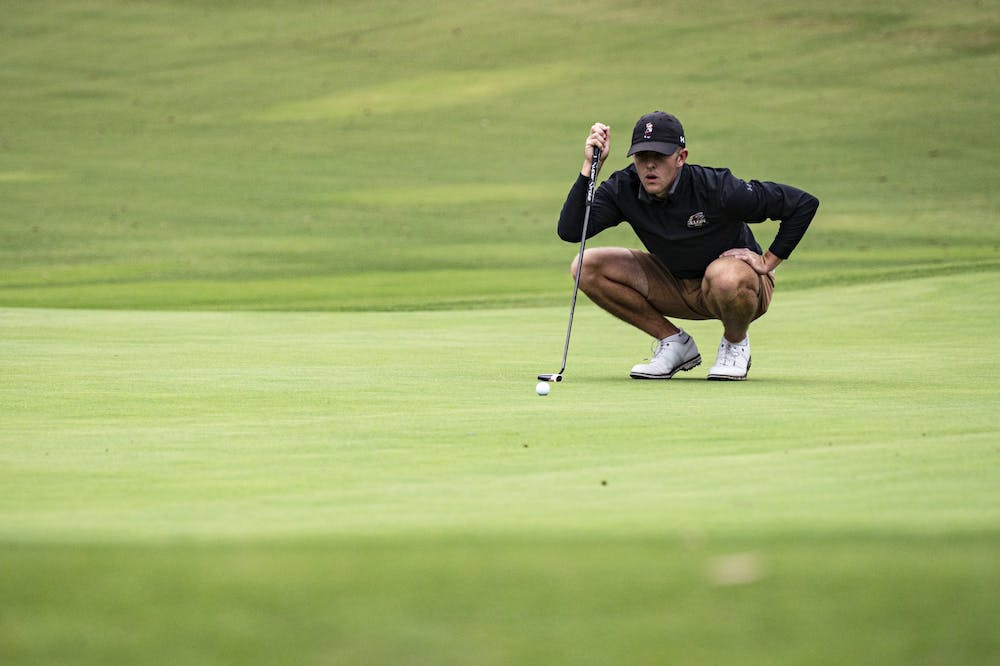 
An Elon University golfer lines up his putt on hole four at the Alamance County Club during the Elon Phoenix Invitational on Oct. 12, 2021.

Elon shot a team score of 288 to improve on its first round score by six shots and move up a spot on the leaderboard. Elon trails tournament leader and defending champion College of Charleston by 27 shots.

Sophomore Garrett Risner is tied for 10th place in the individual competition after posting a round of 73 that included three birdies and four bogeys. Junior Bronson Myers was in the top five early in the second round, but bogeyed four of his last six holes to shoot an even par round of 72 and drop into a tie for 14th place.

Freshman Matt Doyle shot a 2-under par round of 70, the low round of the day for Elon, to move into a tie for 24th. Doyle birdied three of his final seven holes to improve his first round score by nine shots.

Redshirt senior Will Frodigh also improved on his first round score, posting a 1-over par round of 73 to move into a tie for 27th place. Frodigh was 3-over par after the front nine but made three birdies on the back nine, including a closing birdie on the par-5 18th hole.

For the second straight day, freshman Juan Callejo Ropero made Elon’s only eagle of the day, which came on the par-5 13th hole. He also made a triple bogey on the first hole, a double bogey on the 14th hole, five bogeys and five birdies to post a 3-over round of 75, the team’s highest score of the day.

Elon is tied for fourth place with the University of Delaware. The two teams are eight shots clear of sixth place Towson University. For the second straight day, Charleston shot the lowest round in the team competition and is 21-under par through two rounds. Three of the top four players on the individual leaderboard are also from Charleston.

Elon’s tee times for tomorrow’s final round begin at 9:12 a.m. Callejo Ropero will be the first Elon player to tee off and Risner will be the last at 10 a.m.