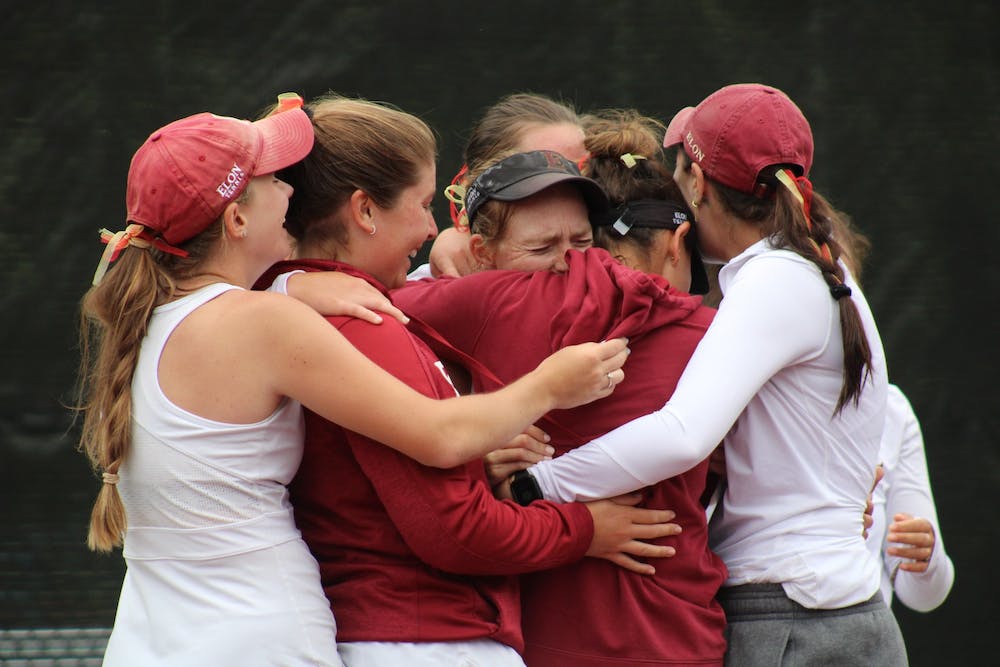 For the first time since joining the Colonial Athletic Association in 2014, the Elon University women’s tennis team has advanced to the CAA Women’s Tennis Tournament championship match after coming from behind to upset the top-seeded College of Charleston Cougars 4-3.

Galvin won the first set of her match 6-4 but lost the second 6-3. She went down an early break in the third but said the support from the crowd helped her to battle back and force a match-deciding tiebreak.

“I just really needed to dig deep and make sure that we got to play again tomorrow as a team,” Galvin said. “They really lifted me up because I was in a dark place early in that third set. They had my back throughout all the points, and I really appreciated it.”

Galvin took an early lead in the tiebreak and never looked back, winning 7-3 to tie the match at 3-3. After winning match point, she dropped her racket and covered her mouth with her hands as her teammates ran to hug her.

“I wasn’t ready for it to be over, and I just knew my teammates had my back. I really felt like there was eight of us playing that match against one opponent because they were all there for me,” Galvin said.

For the second straight day, Galvin was a last-second addition to Elon’s singles lineup in the number six position. Head coach Elizabeth Anderson said she was proud of Galvin’s effort today with so much on the line for the team.

“Shauna just kept battling and fighting,” Anderson said. “She was really determined to play her game, and I think the difference was just her committing to play her game.”

Archer staged a comeback of her own on court four to force a third set. After losing her opening set 6-3, she won a tight second set with  a score of 6-4. She had 5-1 lead when Galvin won her match on court six and clinched the comeback win for Elon with a 6-2 final set victory.

“I know myself and I know [Olivia], and we were made for these moments,” Galvin said. “I had full faith and belief the whole time. I just knew we had to execute, and we did.”

Junior Sibel Tanik won in the No.1 position for the second consecutive day for Elon’s other singles win. Tanik, Galvin and Archer are all 2-0 in singles in the tournament.

For Anderson, reaching the CAA championship match for the first time is a special achievement and has been a goal for this team since the start of the season.

“We’ve known all year how special this group is and what things they can accomplish,” Anderson said. “I was really proud of them for trusting and believing in themselves today.”

Elon will play William & Mary tomorrow at 10 a.m. at the Jimmy Powell Tennis Center in the CAA championship match.