Phoenix win 4-0 to advance to tomorrow’s semifinal round 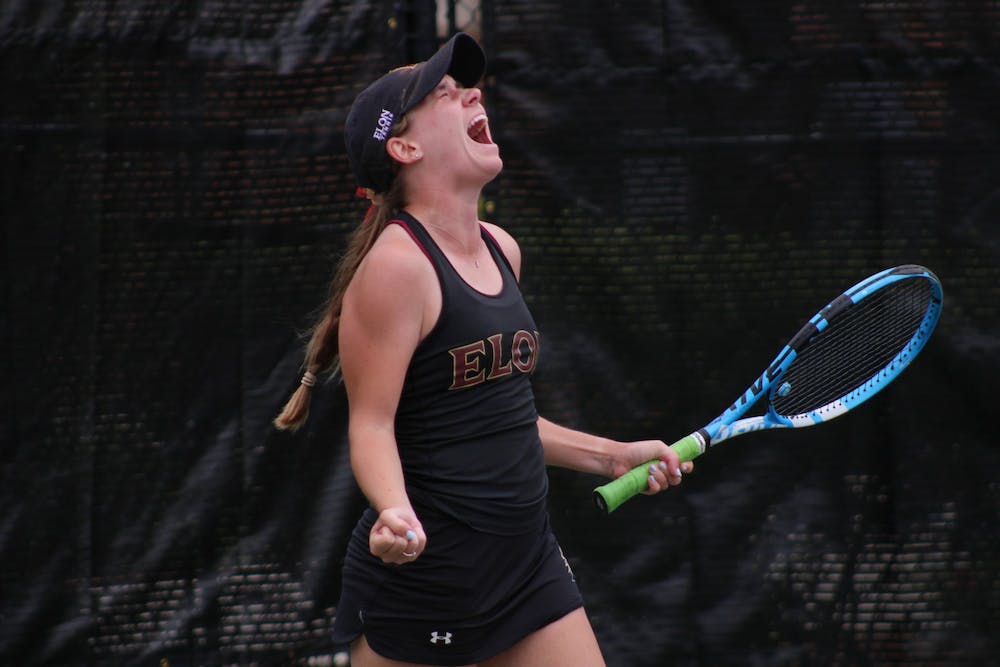 The Elon University women’s tennis team earned the first four points against the University of North Carolina Wilmington Seahawks to win 4-0 in the quarterfinals of the Colonial Athletic Association Tournament.

“Doubles is very important with momentum and that’s something we’ve been working on a lot,” Anderson said. “I was proud of them for focusing on that and trying to do the little things well that helped us to win that point.”

Elon carried its momentum from doubles into singles, winning five of the six opening sets. Senior Olivia Archer won her singles match on court four 6-2, 6-1 to put Elon ahead 2-0.

Archer, who led in Elon in the regular season with 16 singles victories, said she lost to her opponent the last time the two played. While she was nervous leading up to the match because of the result of their previous meeting, she said the support from her teammates during the match helped her prevail.

“Anytime I showed any sense of doubt, they were like, ‘No, you got this, stop doubting yourself,’” Archer said.

While Archer tried not to look at the Jimmy Powell Tennis Center’s large scoreboard to see how Elon’s other singles matches were going, she said she could not help herself from getting excited about Elon’s strong start to the session.

“I shouldn’t but my eyes have a tendency to wonder,” Archer said. “I view it as encouragement but at the end of the day, you want to be the one putting the points on the scoreboard for your team. It’s nice to see but it never really takes away from anything that I’m doing.”

Shortly after Archer completed her match, junior Shauna Galvin posted a 6-2, 6-1 win of her own on court six to put Elon ahead 3-0. Galvin is now 6-1 this season in the number six position.

With a 6-4, 6-3 win on court one, junior Sibel Tanik clinched the match for Elon. Anderson said she was pleased with the performance throughout the team’s doubles lineup and was happy about the strong performances in the fourth and sixth positions.

“Every point counts the same and it’s really important to have every singles player to be focused and locked in,” Anderson said. “That gave us a lot of momentum to win those positions to set Sibel up to clinch.”

With the win, Elon advances to play top seeded College of Charleston tomorrow at 10 a.m. in the semifinals. Charleston defeated Hofstra University 4-0 in its quarterfinal match and beat Elon 5-2 on March 15 in Charleston.

“The last time we played them wasn’t fully what we were capable of,” Archer said. “I’m excited to play them again.”