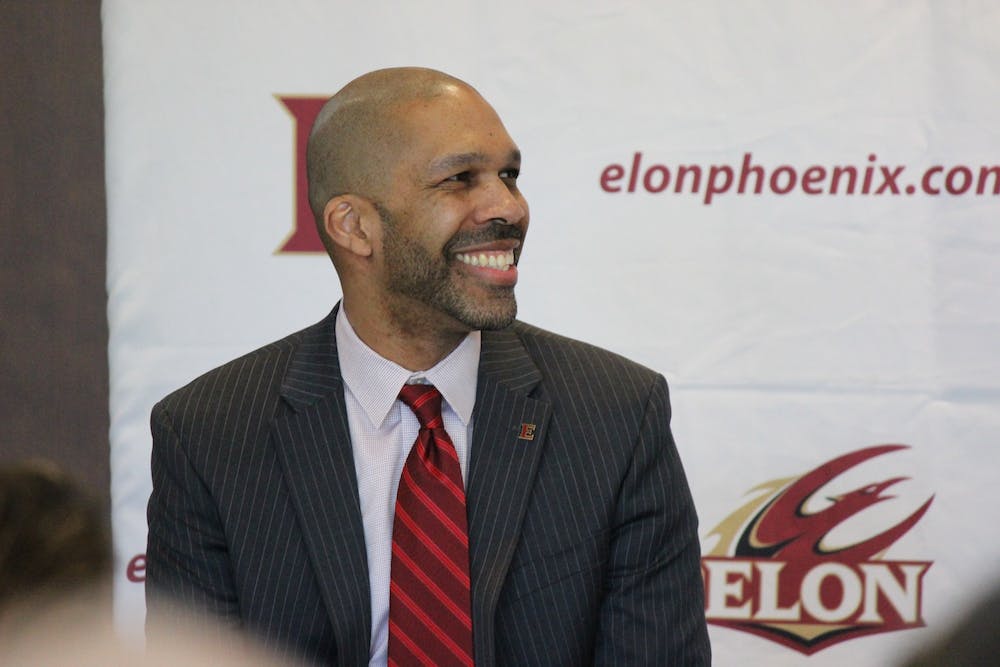 The Elon University men’s basketball team has found its next head coach in Billy Taylor. The team formally introduced Taylor in an introductory press conference at Schar Center.

Taylor will serve as the 19th head coach in the team’s history following a nationwide search for the next leader of the program. Despite the scale of the process, Director of Athletics Dave Blank told members of the Elon community that one name kept popping back up.

“As this thing went around the country, more and more feedback came to me about Billy,” Blank said during the press conference. “It just kept coming back and that's the way you want it, people reflecting particularly on his character, what kind of person he is first, and then what kind of coach he is, which means an awful lot to me.”

Taylor will assume control from previous head coach Mike Schrage. Schrage resigned on April 5, coming off a 10-22 season and a loss in the first round of the Colonial Athletic Association tournament. Schrage returned to Duke and will serve as a special assistant to head coach Jon Scheyer.

Taylor comes from nearly 25 years of coaching experience, most recently as an assistant basketball coach for the University of Iowa where he worked under longtime colleague and friend, Iowa head coach Fran McCaffery.

“I’m so grateful to the McCaffrey's for everything they've invested into our family to help us develop and really encourage us as we have gone on our coaching journey,” Taylor said.

Taylor has 14 years of head coaching experience, 11 at the NCAA Division I level, including stints at Lehigh, Ball State and Belmont Abbey. The program is still looking for its first trip to the NCAA Division I Men’s Basketball Tournament in school history, which teams with Taylor as head coach or staff have accomplished seven times.

Taylor said while he appreciates his mentors, he also wants to be his own coach, and build upon Elon's success. Taylor also told the Elon community about his goals and aspirations for the future of Elon men’s basketball.

“We’re gonna play fast. We're gonna play with tempo. We'll play with pace. I trust our guys,” Taylor said. “That means taking great shots, sharing the basketball, high assists, low turnovers, sharing the basketball, being great teammates, setting screens… a lot of coaches will say that and then play games in the 50s. We're trying to get to 50 by halftime.”

Apart from the hire of Taylor, a multitude of questions still loom over the program’s future. The team lost its leading scorer from the previous season, sophomore guard Darius Burford, and currently has six players in the transfer portal. The resignation of Schrage also led to two players, Devin Carney and Nick Martinelli, formally committed to Elon, opening themselves back up to recruitment.

Taylor will look to hold the program together during this time of change. Despite recent struggles and hurdles, Taylor said he has hope for the program’s future.

“We have great people. As I got a chance to meet the people here, that's what really impacted me to say this place is special,” Taylor said. “This is a place where we can win, do it the right way, and have a great time doing it.”