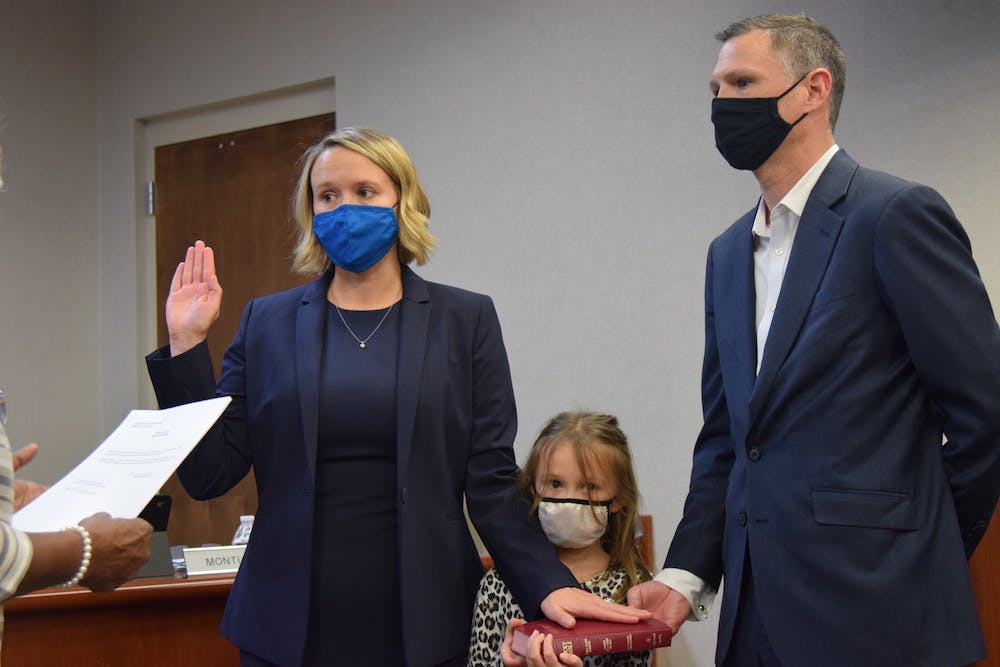 Photo by Kyra O'Connor | Elon News Network
Mayor-elect Emily Sharpe is sworn in beside her family on Dec. 6, 2021. Sharpe is the second female mayor in the history of the town of Elon.

Growing up, Emily Sharpe’s mom told her that she could be anything she wanted to be when she's older — except a politician. Today, Sharpe is doing exactly what her mom advised against and serving as the current mayor of the town of Elon.

Sharpe was elected as mayor in 2021, where she is the second female mayor of the town since  Beth Schmidt resigned 25 years ago. Previously, she was the seventh woman to serve on the Board of Aldermen when elected in 2017.

Sharpe said one of the reasons she was initially interested in joining the Board of Aldermen was because it was all men.

Click below to see Sharpe on Elon Local News:

As mayor, Sharpe said her number one goal is to bring people together, including both full time residents and students.

Sharpe is also interested in finding new avenues of sourcing, such as grants. This is because the town's main partner, Elon University, is a non-profit organization — meaning it cannot be taxed. Sharpe said, finding new sources of funding is necessary in order to keep Elon as one of the safest college towns in the nation.

While Sharpe didn’t grow up interested in politics, her family was community oriented, causing her to take an interest in town issues, before she even knew what the Board of Aldermen did.

“My mom volunteered all the time, and when I first ran for this, being on the board of aldermen, I thought it was a volunteer role,” Sharpe said. “Her just raising me to be community minded, with that kind of altruistic characteristic of myself really has helped me.”

"At one time, women couldn't own land, women couldn't vote. I certainly couldn't sit where I am right now … I haven't personally experienced a lot of barriers in terms of being a female in political office or elected office, but that certainly hasn't been the case for people who've come before me."

Mayor of the town of Elon

Representation of all kinds is important to Sharpe and she feels that this is what helps create a board that better represents the community. Sharpe also said that while she hasn’t personally faced discrimination as a woman in politics, she knows that has not always been the case historically for women in office, which pushes her to make female representation even more important.

“At one time, women couldn't own land, women couldn't vote. I certainly couldn't sit where I am right now,” Sharpe said. “I haven't personally experienced a lot of barriers in terms of being a female in political office or elected office, but that certainly hasn't been the case for people who've come before me.”

Town manager Rich Roedner has worked with Emily Sharpe since he began his position over two years ago. He previously worked with predominantly female and male boards and feels representation for both is important.

Roedner said that having Sharpe, a younger board member and more gender representative person,  has led to an increased amount of enthusiasm for the town.

“She does bring a different view of life and Elon than previous boards have,” Roedner said. “We have a younger board than I think we've had in the past, both in terms of age, but also in terms of experienced elected officials … We have an active board right now that really wants to see things happen in the community.”

With her gender being a part of her identity in office, representation is something Sharpe feels is very important and is what helps shape Elon’s community.