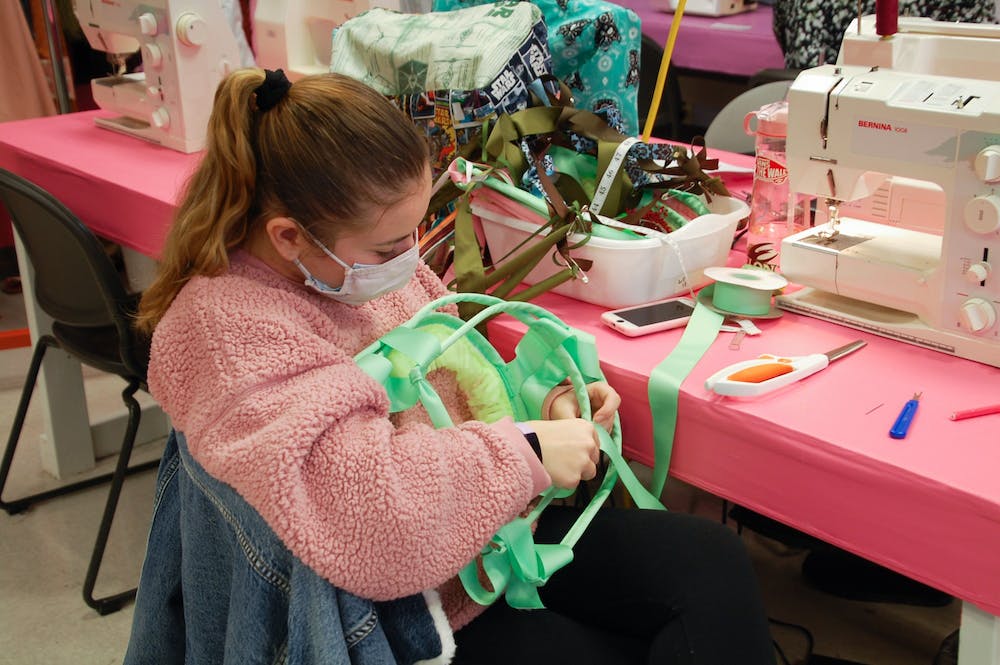 
Brianna Boucher creates a costume piece for the production of “Into the Woods” debuting on Feb. 11.

As the stage lights up in McCrary Theatre, the audience can see the story come to life with the sets, costumes and designs. According to senior stage manager for Elon University’s production of Into the Woods, Sydney Bell, said this is due to the months of hard work by the crew prior to the performance. Bell said that although the technical side of theater is often overlooked by the audience, it is what makes the magic happen.

Into the Woods is a musical written by Stephen Sondheim where a baker and his wife travel to different fairy tales throughout their quest to become a family. The production will take place Feb. 11 to 13 in McCrary Theatre.

“Having a show that's so steeped in escapism and reality, provides audiences with a time to really self-reflect,” Bell said. “I think the technical aspects really bring to life the magic of theater.”

When thinking about musical theater, what comes to mind for most is acting, directing and helping with props or lighting. But, according to Bell, the building of sets and creation of costumes are crucial for a production, especially one like Into the Woods that is centered around fairy tales.

According to Bell, the magical aspects of the piece itself were heavily considered when designing elaborate costumes, time-century specific sets and more.

“Because of all of these stories mixing we wanted to create a … mix of the world in a shell, but also making it magical,” Bell said. ”Because it's all fairy tales, there's a lot of magical elements to it.”

Bell said that as stage manager she has three main roles: being an advocate for both the cast and crew, communicating between all different teams and running the technical aspects during the performance. The latter part of this role will begin the first week of spring semester.

“Currently, as the scenery is being built, we are in rehearsal and figuring out how the show is gonna look. And with that, it's figuring out how certain magic moments on the show are going to happen,” Bell said. “But the real technical process of Into the Woods will happen the first weekend of spring semester with our tech rehearsal, and that is when the lighting designer, the senior designer, all the costumes — every technical aspect of the show, gets rehearsed.”

Since Into the Woods is a winter term show, the process and preparation looks different than for a fall or spring show. Though shows are decided a year in advance, production started in September 2021 — with designers pitching ideas, trying to source materials and preparing for the show. However, no action can be taken until there is a cast.

“The technical side of rehearsal starts a lot earlier than the cast does and is essentially from September to December. It's a lot of talking and collaborating and figuring out what will work best for the show,” Bell said. “Once we get into rehearsal for J-term, it's more of the true process of actually building everything and making sure everything can get done on time.”

The design and set proposals are brought to their respective department heads so that they can decide what is possible within the budget. Senior and technical director Eric Kanzinger said his job is to turn these ideas into reality. Kanzinger receives the initial designs which he redrafts until it is possible to be built and in budget.

According to Kanzinger, most of his job is done earlier in the process, so at this point he is jumping in wherever he is needed — like helping to build the set.

“In most cases people will shoot for the moon and then we kind of draw everything back in,” Kanzinger said. “But then a couple of weeks after those initial estimates, we then sit down and cut back on some things either get rid of pieces entirely, or maybe we'll swap materials.”

According to Kanzinger there are some reusable stock pieces that are prebuilt and designers incorporate them when they can. For most shows, especially ones like Into the Woods with multiple settings, the majority of the set consists of fresh builds.

Bell believes theater is important now more than ever because it provides an escape from the COVID-19 pandemic and the real world.

“Into the Woods could not have come to Elon at a better time, given the pandemic and everything that is going on in the world,” Bell said. “At least for me as a theater maker it's really nice to have back because, I'll speak for myself, but the past two years have essentially been kicked to the curb for most theater makers of our industry going through so many loops.”