Phoenix lose 17-11 despite being tied at halftime 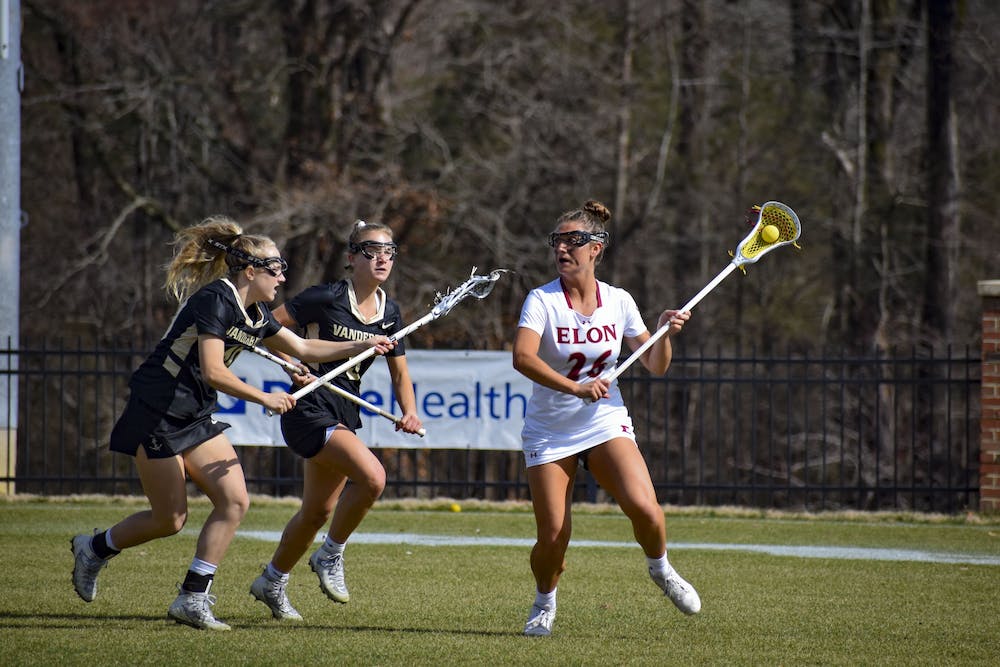 Despite a strong effort to come back from a significant early deficit, the Elon University lacrosse team was unable to defeat the Vanderbilt University Commodores on Feb. 25, losing 17-11 to fall to 0-3 for the season.

Vanderbilt scored five goals in the opening eight minutes to race out to a 5-0 lead. However, Elon responded with four goals in the final seven minutes of the first quarter – and a fifth that was called back because of a stick violation – to make the score 5-4 at the end of the frame.

Senior goalie Paige Brown started for Elon, but allowed four goals on four shots on goal. With 7:57 left in the first quarter, freshman Chloe Herghelegiu entered the game for the Phoenix. She made eight saves on 13 shots

“Chloe had a great week of practice, she keeps getting better and better,” head coach Josh Hexter said. “I just felt like, for whatever reason, it wasn’t Paige’s day, and so we just needed to give Chloe a shot. She did a great job.”

The Phoenix kept its momentum going at the start of the second quarter, as junior midfielder Hannah McCarthy scored to tie the game 23 seconds in and senior attacker Bella Feldman gave Elon its first lead of the game with her second goal of the game, 11 minutes left in the quarter.

“They just reverted back to making sure we’re taking care of the fundamentals,” Hexter said. “They started winning more draws, keeping the ball in their stick, not getting back checked, running our offense the way we’re supposed to. We were doing the little things, which was why we made that run.”

After Vanderbilt tied the game at 6-6, senior midfielder Gillian Curran scored on a free position attempt for her team-leading eighth goal of the season to give Elon the lead.

Curran led the team with four assists, and said Elon’s passing was key to the team getting back into the game.

Vanderbilt scored late in the second quarter to tie the score at 7-7 going into halftime. Much like in the first quarter, Vanderbilt got off to a hot start to begin the third, scoring three quick goals to retake its lead. A goal by freshman attacker Cierra Hopson was answered by three more Vanderbilt goals, as the Commodores took a 13-8 lead into the final quarter.

Elon was unable to mount another five goal comeback, as Vanderbilt outscored Elon 4-3 in the final quarter to secure a six-goal victory.

Hexter said the team began to rush offensively when Vanderbilt began rebuilding its lead, which led to turnovers and poor possessions.

Curran, Feldman and Hopson were the leading scorers for Elon, all scoring three goals. The Phoenix forced 18 turnovers, which Curran said helped set up the team’s offense.

“The defense killed it today. It started with them and then transitioned down to the offense, and that helped us get the momentum going and get some goals,” Curran said. “Obviously, we could have done better but I think that we didn’t get complacent and we played well the whole game,”

Though Elon is yet to win a game this season, its three losses are against teams currently ranked in the Inside Lacrosse top 25 poll. Hexter said he was pleased with Elon’s performance against 22nd ranked Vanderbilt and said the biggest thing the team needs to work on going forward is consistency.

“I loved our girls’ effort,” Hexter said. “They’re fighters. They’re scrappers. They’re going to give us 60 minutes, which is what I love about this team. We really just need to focus on the little things. If we do that, we’ll be fine. I love how we played today.”

Elon will play its fourth consecutive home game to begin the season on Sunday against Coastal Carolina University. The game will start at noon at Rudd Field.