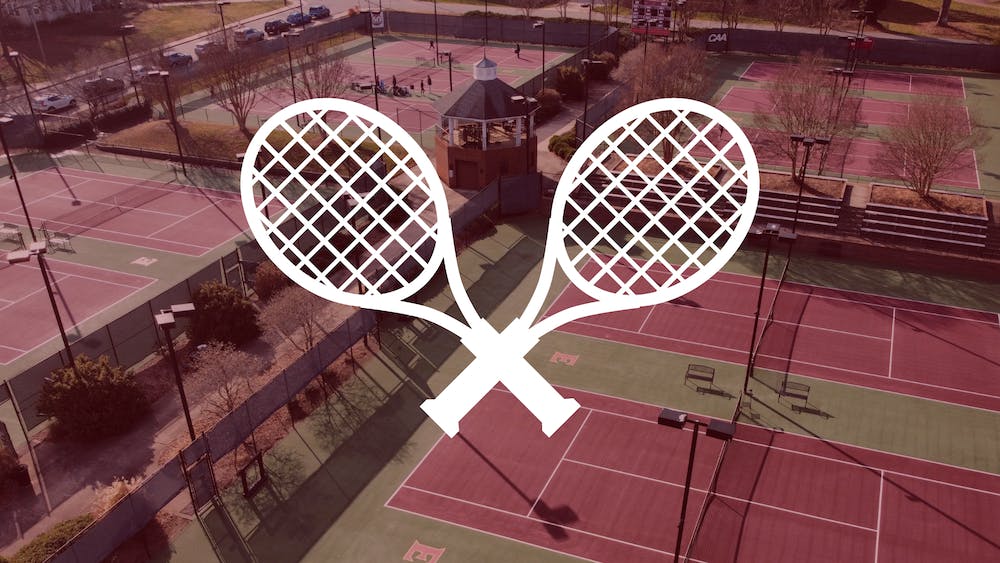 Photo by Carter Craig | Elon News Network
Elon University will host both the men’s and women’s CAA Tennis Championships to close out the regular spring 2022 season.

Elon University’s men’s and women’s tennis teams both travel to begin their seasons on Saturday against in-state foes separated by just over 80 miles.

The men’s team returns several of its key players from last season, with five of its top seven match winners in singles back for the spring campaign, but also welcomes some new faces.

Graduate student Kyle Frankel returns to the Phoenix this season after posting a team-best 15-1 mark in singles matches last year. Frankel, who is entering his fifth season with the team, enters the year with 55 career singles wins, the eighth most in program history. He is just nine wins behind Damon Gooch ‘09 for the most at Elon.

While the team lost Akram El Sallaly and Jacob Bicknell to graduation after last season, it will have three new players in freshmen Joseph Dougherty and Esteban Penagos, and sophomore Daniel Martin. Martin, who transferred to Elon after two seasons at the University of Minnesota, saw significant playing time in the team’s fall invitational season.

The team is coming off a 15-6 campaign in 2021 that ended with a loss to William & Mary University in the semifinals of the Colonial Athletic Association Men’s Tennis Tournament.

Looking to take the next step

After a 17-5 season that also ended in the semifinals of the CAA Women’s Tennis Tournament, the women’s tennis team is looking to win a conference championship for just the second time in program history and its first since winning the Southern Conference in 2014.

Sophomores Lizette Reding and Alison O’Dea both enjoyed stellar rookie campaigns with the team last season, as the two teamed up for 11 doubles victories, with Reding posting a team-best 16-3 record in singles.

Senior Victoria Saldh and junior Sibel Tanik also return after posting 13 wins each in singles. The team also welcomes junior Julie Ball, who transferred to Elon after two seasons at the University of Tennessee.

Neither team will play a home match in January. The men’s team plays its first three matches of the season on the road against a trio of Atlantic Coast Conference opponents, while the women’s team begins with four road tilts.

The men’s team plays its home opener at the Jimmy Powell Tennis Center on Feb. 4 against Liberty University, with the women’s team opening its home schedule Feb. 12 against Campbell University.

Though both teams start out their seasons with lengthy road stretches, they have something to look forward to at the end of it all, as Elon University will host both the men’s and women’s CAA Tennis Championships to close out the regular season.