Julie Ball has lived in 12 countries and speaks four languages, but is settling in at Elon 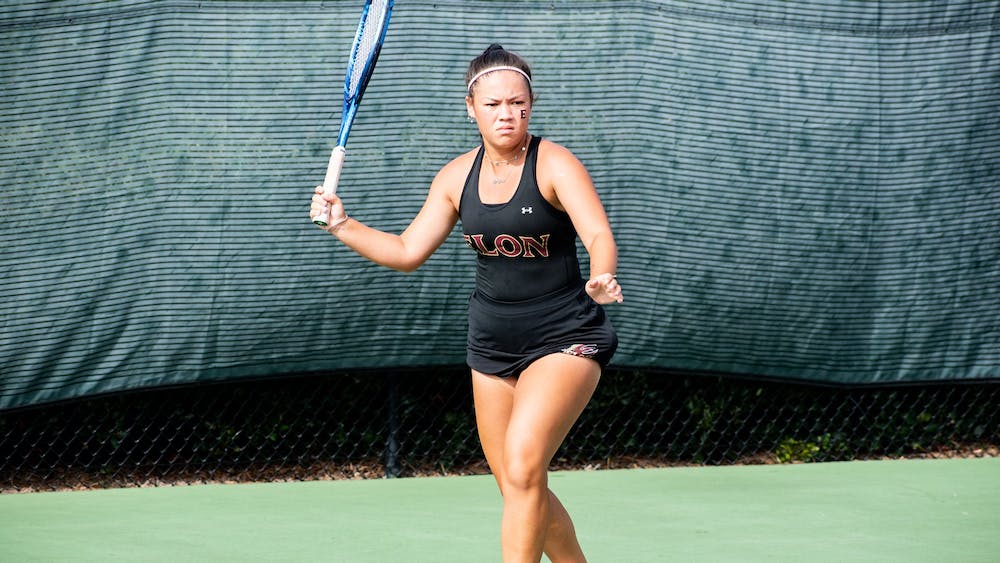 Julie Ball plays in a match outside on Elon’s tennis courts. Courtesy of Julie Ball.

There are few constants in junior Julie Ball’s life, but tennis is one of them. Moving from country to country her whole life because of her dad’s work, the Elon University tennis player has found tennis to be the one thing that followed her everywhere. When her father would get a new assignment, Ball’s family would have to move wherever the job was.

“When my dad told me about his new assignment, I knew it was time to pack my bags,” Ball said.

Ball first picked up a tennis racket at the age of four, and quickly fell in love with the sport. At just nine years old, Ball was playing around 45 minutes a day. She started taking the sport more seriously when she moved back to Spain, as tennis is one of the most popular sports there.

Ball credits much of her athletic and overall maturity to the nature of her upbringing, where she had to quickly adapt to a new culture and form a positive environment around her.

“Being able to witness so many different cultures has given me the ability to understand different types of people because I have been a part of it first hand.” Ball said. “Moving around a lot may have been hard, but I wouldn’t trade it for anything.”

After playing tennis at the University of Tennessee for over two years, Ball transferred to Elon University. Though she enjoyed her time at Tennessee, Ball felt her development had come to a stop both academically and athletically.

According to Ball, one thing she was looking for in her transfer process was a smaller school with a tight-knit community. When Elon head coach Elizabeth Anderson called her coach at Tennessee, she started to look into transferring to Elon.

“It checked all of the boxes,” Ball said. “I loved the school, the area, the education possibilities and my teammates.”

In her first semester at Elon, Anderson said Ball is already one of the team’s leaders. Since Ball has more experience in college tennis than most of the team, Anderson said she sets great examples and is well-liked and respected by her teammates.

“Julie brings great energy to the team every day, and it is felt by everyone,” Anderson said.

Including Ball, four out of the eight players on the women’s tennis roster are international students.

“Everyone is from somewhere different, so everyone can bring something different to the team in regards to experience, culture, and their type of knowledge.” Ball said.

With their families further away than most, Elon is their home away from home, creating a close team bond.

“Because we’re all from abroad, this is our home away from home, so everyone’s a family here,” Ball said. “It creates an environment where we can all learn from each other.”