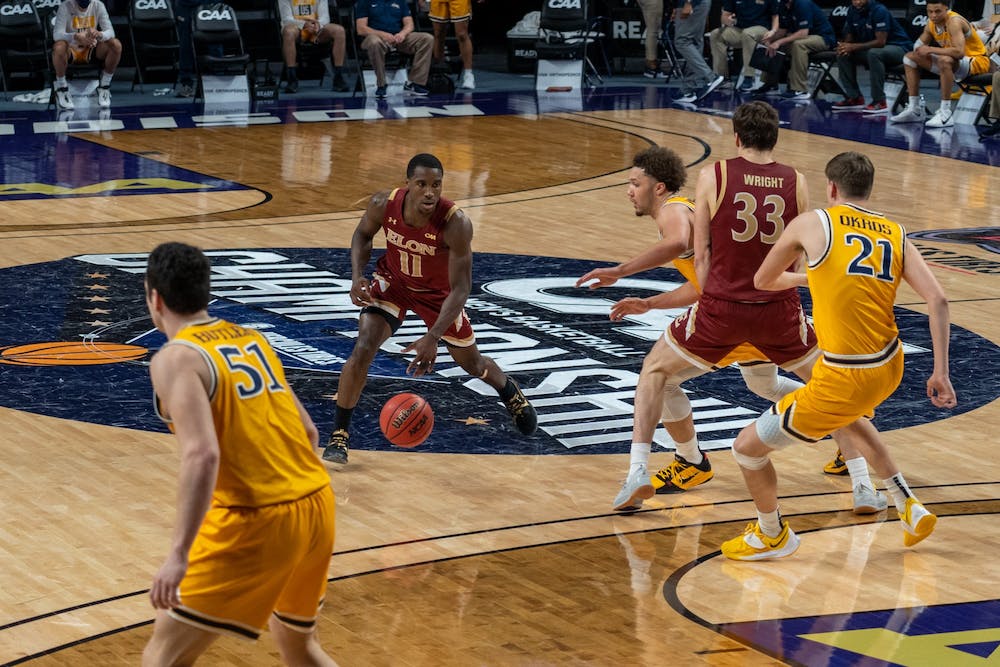 Former Elon University men’s basketball player Ikenna Ndugba ‘21 recently became a member of the Greensboro Swarm of the NBA Gatorade League. The Swarm is the G-League affiliate of the Charlotte Hornets.

The G-League is the NBA’s official minor league, with 28 NBA teams having affiliate organizations competing in it. The G-League Draft consists of three rounds and 84 total selections, and allows teams to add players from a pool of 150 that sign contracts with the league each season.

Ndugba spent his first four seasons at Bryant University before transferring to Elon as a graduate student prior to the 2020-2021 season. He started all 19 games for the Phoenix last season, averaging 10 points, 4.8 rebounds. Additionally, he received the team’s Defensive Most Valuable Player award last season.

Interview has been edited for clarity.

What does it mean to you to be a professional basketball player and to be in the NBA’s premier developmental league?

"I think the biggest thing is that it's just a goal of mine that I've wanted to earn a living playing the game that I love. And that's been since I've been a little kid and it means a lot. It is a great opportunity and, you know, this is one of the best leagues in the world, and that being said, I just try to really take advantage of every opportunity. So, I just keep that in mind and know that I'm blessed to be in this position and just to take advantage of it."

Has playing in Greensboro made the transition to the G-League easier for you?

"Being in the G league obviously presents its own challenges and adjustments that have to happen, but it’s definitely helped just the fact that I'm so close and being able to like reach out to any of the players and coaches that are there. They've reached out and came to games. So like that, that definitely helped me, um, you know, transition a little bit better off the court."

What has it been like early in the season to play for the Swarm?

"It's definitely been cool. It's different because it is a professional professional organization. There's fans here that go hard for the Swarm. And so just to see even when we have open practices and see some of the fans has been really, really cool more than anything.

During the games, I try to be as focused as possible, but I just remind myself when we run out the tunnel that this is something I've always wanted. There's another layer, another level of focus, attention to detail, development that goes into it and you have to really put your best foot forward every day."

What does you getting drafted into the G-League say about the current state and future potential of Elon University’s men’s basketball program?

"It’s definitely a step in the right direction. It's a good sign. When I firstI got to Elon, one of the things I spoke to Coach Schrage about was that I came there to be a pro. I wanted them to treat me as such and coach me as such and prepare me that way. And that's how they prepare us, first as young men, but obviously as hoopers as well. They put that much time and detail into their practices, the team events that we have, how they coach you. I think it definitely does a great job of getting you ready for the next level, if that's where guys wanna go. Our coaching staff is amazing. Some of the things they taught me, I still apply everytime I step on the floor. I think recruits will start seeing that, because it’s not gonna be just me, you’re going to see more in the next few years."

What are you most excited about for this season?

"Being a rookie, you realize how much you don't know in a way, and that's kind of exciting in a way because you have a lot to learn. And so like whether it be offensive things, little tricks or details here to learn, to improve, I think those are the things that really interest me. Having coaches that will explain certain things, especially being at the point guard position, there's a lot of things that you're in charge of on the floor like how to talk to certain guys and play calls. Those are the things that I'm excited about to continue to grow and get better at."