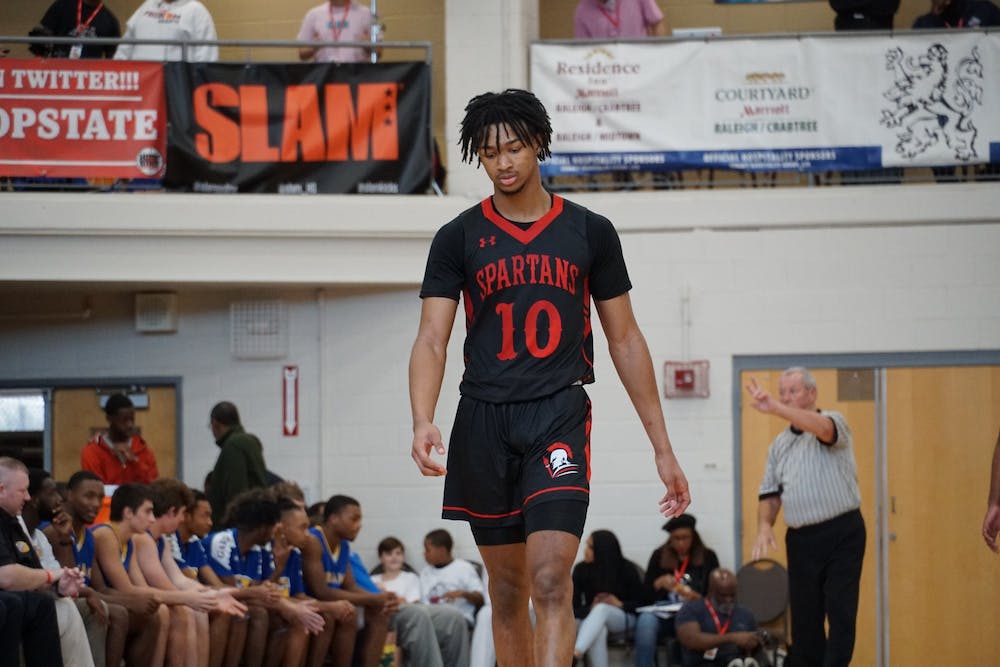 Ja’Dun Michael was used to waking up at 5 a.m. to lift alongside his brother and dad before going to class at The Burlington School. They worked out together as many as five times a week.

Now, because of the coronavirus, Michael is finishing up his senior year of high school online, and his workouts consist of runs around his block and lifting weights at home.

Michael is an incoming freshman forward for the Elon University’s men’s basketball team. He is the first scholarship player from Burlington to be signed by the Phoenix since Elon moved to Division I in 1999. Michael started playing basketball when he was 7 years old and has always wanted to play in college.

“I would watch college games and just be like, ‘dang that has to be fun,’ all of the fans and the tough environments you have to play in on the road,” Michael said.

He is the No. 184 ranked college basketball prospect in the nation and is a 3-star recruit according to 247Sports — a  website dedicated to scouting recruits. He received 20 offers from schools like Penn State University, the University of Virginia and North Carolina State University.

Michael is an extraordinary recruit for the Phoenix and the Colonial Athletic Association. He is the only recruit in the CAA this year ranked in the top 200 players nationally and is the highest ranked player ever to sign with the Phoenix.

At first, Michael was set to play for Wichita State University. The Shockers have appeared in the NCAA Tournament 14 times and have even advanced to the Final Four twice. Elon, in contrast, has never made the tournament.

He committed to Wichita, but after six of their current players transferred and the coronavirus began to spread throughout the country, he decided to decommit. Michael announced his decommittment on Twitter on March 30 at 5:37 p.m. — exactly 37 minutes after Gov. Roy Cooper’s stay-at-home order went into effect.

But he stayed hopeful about the recruitment process.

“I was eager to decide where I was going to play next,” Michael said. “And whether I was going to continue to play at the higher level or for my hometown team.”

With his senior year continuing online, he thought about what he wanted in a university.

He wanted connections. Wichita, Kansas is over 1,100 miles from Burlington. The high school Michael attended, The Burlington School, is less than three miles from Elon. He already knew most of the Elon basketball team. His high school coach, Ryan Bernardi and trainer, Matthew Handy are graduates.  His family can attend every game and his girlfriend of almost two years will also be a freshman.

“I just wanted to go somewhere where I actually knew the people I'd be around every day,” Michael said.

In a time where people are social distancing, Bernardi understands why Michael wants to be on a campus where he already has connections

The effects of the coronavirus gave Michael a new perspective during his college decision process. If it were not for the pandemic, Michael said the outcome of his decision would "most likely" have been different.

“We definitely benefited from [Elon] being home,” Mike Schrage, head coach of the Elon men’s basketball team said, referring to the stay-at-home order. Schrage does not think this is the only reason for Michael’s decision.

“Ja’Dun being around the guys, I think there's a comfortability,” Schrage said. “They saw us at work in a practice setting and I think we were impressed with what we were doing and what we were planning on doing.”

“I built a great relationship [not just] with Ja’Dun but with his dad,” Schrage said. “His work schedule is from 4 p.m. right now to 2 a.m. And I'm a late-night guy anyways, but when he opened up his recruitment, I would call him at 2 a.m. on his way home back from Greensboro to Burlington, to spend time with him on the phone.”

“The whole family was really behind the idea of us, which I appreciate. A lot of families could get caught up with just the highest offer or a high major offer.” Schrage said.

Michael’s commitment will allow him to see his family often. His parents, William and Tiena and three siblings, are excited to come to every game, but for Michael there are other benefits as well.

“They won't have to worry if something bad was to happen about having to rush and get on a plane,” Michael said.

Schrage's son, Andrew, was a freshman at the same high school Michael goes to and played on the varsity basketball team with Michael this year.

“[Andrew] was around Ja’Dun, and his perspective and how much he respects Ja’Dun not only as a player, but as a person that resonates with me too,” Schrage said.

Schrage thinks his work ethic is one of the most impressive parts about Michael and believes that will help foster the environment Elon wants.

“He works so hard. That's the culture we're trying to create … Young men who understand the value of getting [an] Elon education and being here,” Schrage said. “But you have got to also love the gym. You have got to love the process. You have to understand the balance that comes at Elon, the commitment you're making in the classroom but, also, we want you to make on the court. And he's an amazing example of that.”

In the offseason, he works out three times a day. He spends one session lifting weights and two working out on the basketball court.

Bernardi is excited for Michael to be a Phoenix and for the Elon community to get to know him.

Michael is also a 4.0 student, and has never gotten a B in high school Bernardi said.

Brandon Harris: A 6-foot-6-inch shooting guard from Savannah, Georgia, ranked No. 226 in the nation.

Michael Graham: A 6-foot-7-inch power forward from Brooklyn, New York, ranked No. 259 in the nation.

Darius Burford: A 6-foot point guard from Bolingbrook, Illinois, ranked No. 226 in the nation.

Ikenna Ndugda: A 6-foot point guard from Boston, Massachusetts, who is transfering from Bryant University.

“This is the kind of person Ja’Dun is. He is not going to be caught up in the hype,” Bernardi said. “He is going to go and do what is best for him.”

As for the future, Michael looks forward to next year's basketball season. He will be joined by the highest ranked recruiting class in the CAA and the highest in Elon men’s basketball history.

The Phoenix ended the regular season with a 7-11 record in the CAA, the same record they had the previous season.

The team showed improvement toward the end of this year, making the CAA tournament semi-finals for the first time in program history.

“We will make another step,” Schrage said. “I can't really define what that will really be, we will still be really young.”

Like Schrage, there is no specific goal Michael has for himself, but plans to just keep working.

“I love basketball because you can always be doing something to get better. No matter what you are going through in life that ball will be there. It’s one of the most consistent things on earth.” Michael said.