Phoenix stifles the Bison, holding Howard to 15-57 from the field 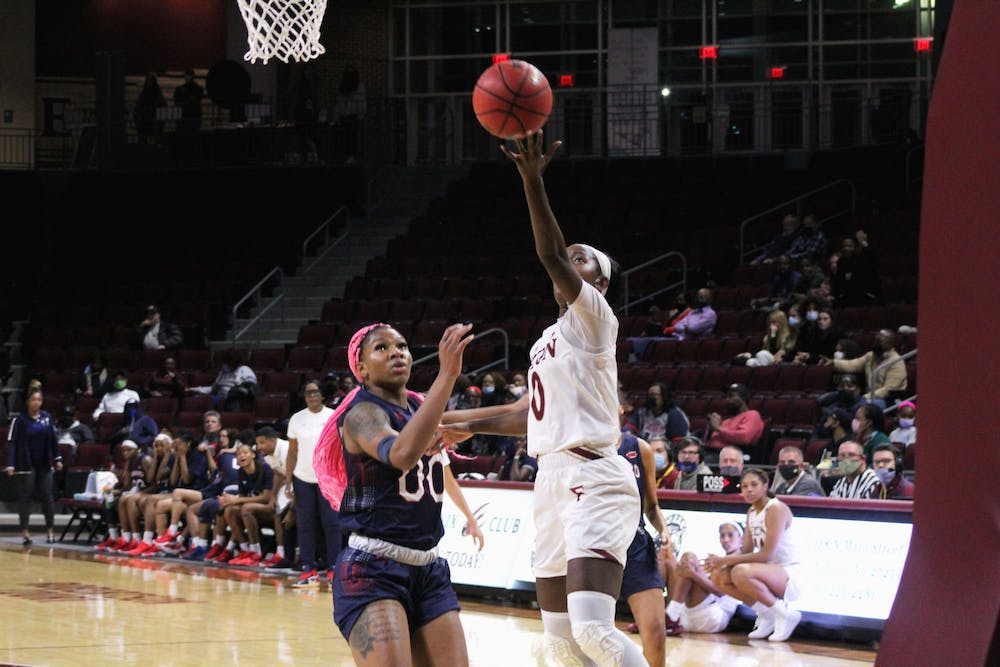 Senior and Guard Brie Perpignan laying up the ball during Elon's match against Howard University in Schar Center on Monday, November 15. The Elon Phoenix won the game.

Monday night in Schar Center the Elon University women’s basketball team took down the Howard University Bison, 60-44. The Phoenix failed to score effectively in the first half, scoring only 15 points, but the second half saw them score a strong 45.

The teams began the game slowly, and at the first timeout midway through the first quarter, the score was 3-3. Elon missed 12 of its first 13 shots — four of those misses coming from beyond the three-point line. The first quarter ended with the Bison on top, 9-7.

The second quarter started no differently, with both teams unable to add to their first quarter totals by the media timeout halfway through the quarter. Senior center Evonna McGill ended the cold streak for Elon with just under three minutes remaining, and Schar Center erupted as she finished through contact and earned a free throw — bringing the Phoenix within one point, 13-12.

Elon struggled mightily to score the entire first half, making just five of its 31 shots. The team also converted just two of its 13 first half three-pointers. Howard also struggled, shooting 25% from the field in the first half. Despite Elon shooting only 16% the score remained close, the Phoenix trailing 17-15 at halftime. The teams had a combined 21 turnovers in the first two quarters.

Elon finally found its rhythm in the second half, shooting 50% in the third quarter and 73% in the fourth on its way to the victory. Senior guard Brie Perpignan was held scoreless for the first 16 minutes of the game. Perpignan, coming off a 23-point outing at High Point in the team’s season opener, finished the game with eight points on 4-13 shooting. Perpignan also added four rebounds and six assists in her 38 minutes on the floor.

When Perpignan began scoring, so did the rest of the team. Her first basket gave Elon its first lead since the first quarter — a lead which the Phoenix only relinquished for one possession over the rest of the game.

“I was pleased with the second half and how we executed, how we moved the ball, how we shared the basketball,” Smith said. “When we moved the ball, we got good, clean open looks. We were able to do some really good things as a team.”

Redshirt senior Ariana Nance matched her career high with 13 points, while Howard had no players with double-digit point totals.

The Elon frontcourt had an excellent game, as the Phoenix registered five blocks. McGill, who had four of the rejections, said it was challenging to go against Howard forward Anzhane’ Hutton.

“I feel like I had to come out from the jump and respect her as a great player,” McGill said. “I was really just being aggressive with her because she plays aggressively.”

The Phoenix goes on the road to the University of Richmond on Thurs, Nov. 18.

Elon’s only road game of the season thus far has been the Nov. 9 meeting with High Point where they squeaked out a two-point win.

“Going into Richmond, Elon needs to focus on Elon,” Smith said. “We have to be better, and I’m not really worried about Richmond right now. It’s all about us in terms of coming out and getting a great start.”