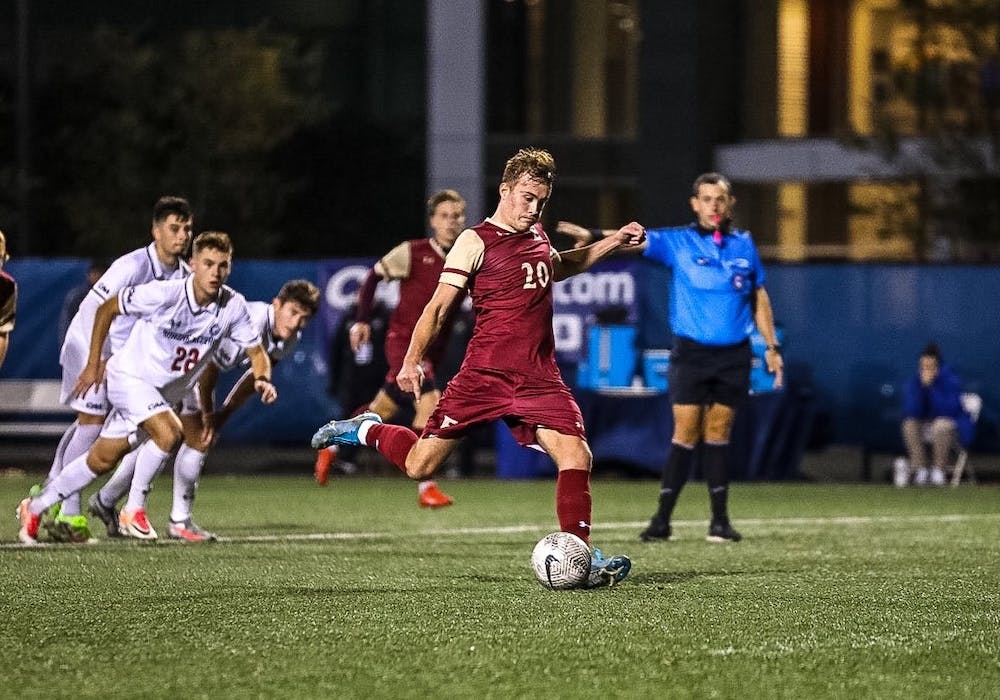 Hempstead, NY — Elon University’s men’s soccer team has advanced to its first ever Colonial Athletic Association championship match, as the Phoenix defeated the Northeastern University Huskies 1-0 in the semifinal round of the CAA Tournament.

“We got that one chance we needed and that’s all we got,” Vatne said. “Maybe not the most deserved win we’ve got, but I’ll take it.”

Neither team generated much offense in the first half, but Northeastern dominated the second, outshooting Elon 14-4 with four of those shots on goal. The Huskies fired five shots in the opening ten minutes of the frame, but the Phoenix weathered the attack to keep the match scoreless.

The Phoenix’s first shot on goal in the match did come until the 75th minute, when freshman midfielder Calle Edelstam fired a low shot to the left corner of the goal. While Northeastern goalkeeper Colby Hegarty saved the shot, he fouled sophomore forward Victor Stromsten in the six-yard box as the two players pursued the rebound. The penalty setup Vatne’s penalty kick goal.

“That was a good penalty kick from Scott, a great shot from Calle, a good follow up from Victor,” Head Coach Marc Reeves said. “That’s the way it goes sometimes, it’s the small margins, and they were in our favor tonight.”

Redshirt junior goalkeeper Peter Wentzel made six saves, including four in the second half to keep the Phoenix in the match. He made two crucial stops in the final 15 minutes to preserve Elon’s 1-0 advantage.

“Every CAA game is a tight affair and we found a way to get it done,” Reeves said. “We prepared really well and when you do that, you give yourself a great chance.”

Elon will face the Hofstra University Pride in the championship match on Sunday at 1 p.m. The winner of the match will receive an automatic bid to the NCAA Tournament.

Hofstra is the tournament’s host and number one seed and is currently ranked 13th in the United Soccer Coaches Poll, a weekly ranking of the top 25 teams in the country. The Phoenix lost to the Pride 2-0 on Oct. 30.