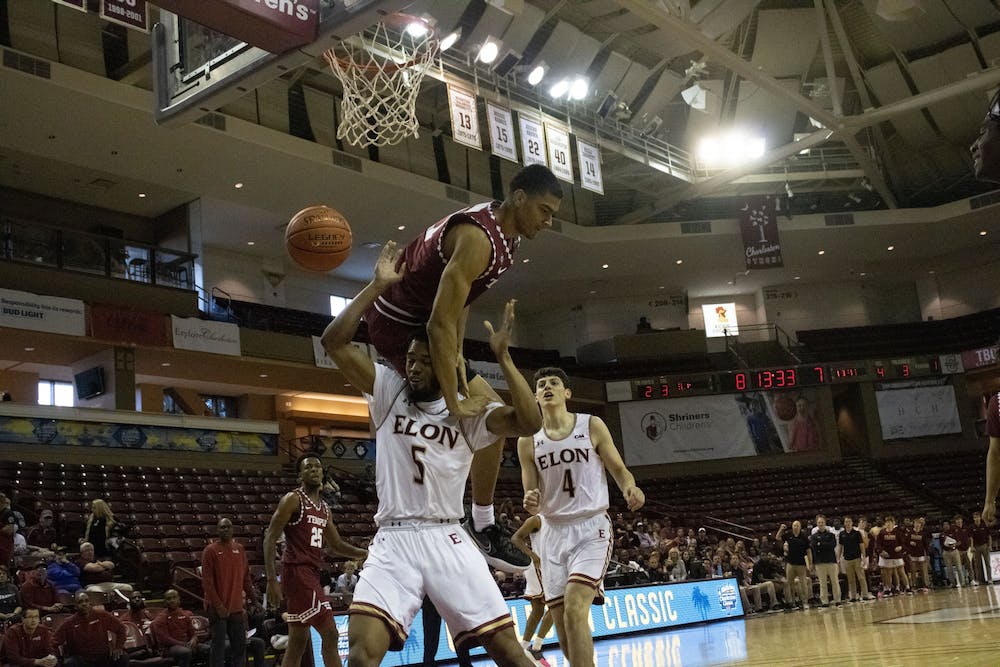 
Senior guard Torrence Watson fights for a rebound against Temple University at the Charleston Classic on Nov. 21.

The Phoenix were up by seven at halftime, but a quick run in the second half pushed Temple ahead, and the Owls never relinquished the lead.

“We talked about the start of the second half, building on the lead and we didn’t, they obviously came out with more intensity,” Head Coach Mike Schrage said. “We let their best players see the ball go in.”

In the first half, Elon was able to find success against Temple’s defense, as the Phoenix shot 41.4% of the field goals and 33.3% three-pointers.

“First half, defensively, we’re locked in. We’re holding the team under 30 points, and with what they were shooting, we’ll take it,” Schrage said.

The Phoenix outrebounded the Owls 18-16 in the first half, but that quickly changed in the second, as Temple finished the game with 45 compared to Elon’s 27.

“I just saw enough out of Jerald Butler the game before, and I just wanted to make a move,” Schrage said. “I always follow my instincts as a coach.”

Two Elon players scored in double digits, led by junior guard Hunter McIntosh, who had 16 points. He was followed by Watson, who scored 12 points for the team.

Schrage said he is looking to reflect on the team’s experience at the Charleston Classic as it prepares for conference play.

“It’s a tough ending, with that second half on our minds right now,” Schrage said. “But we’re gonna reflect back and be thankful, we scheduled this and the other opponents we’re playing in non-conference to get us ready for a heck of a conference.”

Schrage also said he is grateful for the opportunity to play in the Charleston Classic.

“I think right now it’s tough because we’re not happy with the second half, but we’ll be thankful for everything we’ve experienced these few games, and give us perspective on who we gotta be going forward,” Schrage said.

The Phoenix resumes its non-conference schedule against the Jacksonville State University Gamecocks on Saturday, Nov. 27 at 1 p.m.