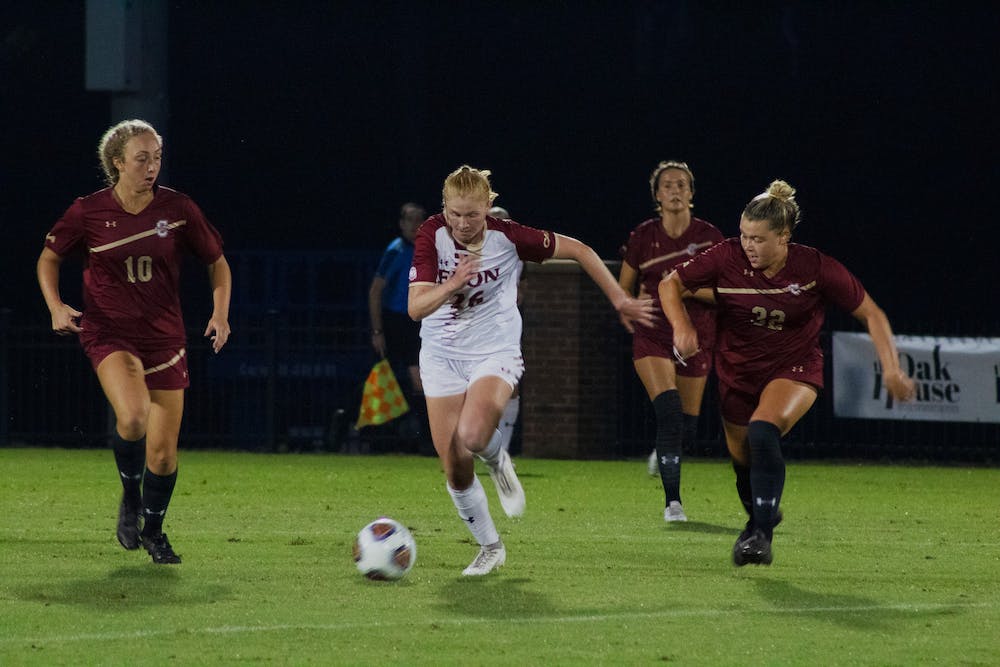 Elon sophomore Beky Myers, playing forward and midfielder, sprinting away with the ball away during the match against the College of Charleston at Rudd Field on October 7, 2021. Elon won the match 2-1.

For the second straight game, Elon University’s women’s soccer team appeared destined for overtime. Tied 1-1 with the College of Charleston Cougars with just under three minutes left in regulation, an unlikely hero emerged for the Phoenix.

Junior midfielder MacKenzie DePriest Kessler received the ball in the goal zone on a pass from junior midfielder Sarah Bevington, got behind her defender and kicked the ball over the goalkeeper and into the top left corner of the net for her first career goal, giving Elon a 2-1 lead.

“Anytime a game is looking to go into overtime, it’s like ‘ok, we need to finish out this game. We need to finish it out now,’“ DePriest-Kessler said. “I saw Sarah flick it and I was like, ‘this is my chance to do it.’ Fortunately, it got over the keeper.”

With just 33 seconds remaining in regulation, College of Charleston scored what appeared to be the tying goal. However, it was overturned because the Cougars were offside on the play.

The Cougars could not score an equalizing goal in the final two minutes, as the Phoenix closed out its first Colonial Athletic Association victory of the season, 2-1.

“Charleston played very well in the second half,” Head Coach Neil Payne said. “They put a lot of pressure on us but we knew we were going to have chances and moments to score.”

Bevington scored the game’s first goal on a penalty kick in the final minute of the first half to put the Phoenix ahead 1-0. However, the Cougars quickly tied the game in the second half, scoring off a corner kick in the 48th minute.

After a tough start to conference play, DePriest-Kessler said this win could help the team’s mindset heading into the rest of its CAA schedule.

“We needed a win tonight. This win is a confidence booster going forward,” DePriest-Kessler said.

Payne said he was happy with how the team competed, but said the Phoenix must clean up aspects of its game for upcoming matches.

“We were disappointed we gave up a corner goal, which is unlike us,” Payne said. “We need to be better in other areas of the field, particularly the middle of the field. But I’m pleased that we showed some grit and resilience and character to get the win.”

With this win, Elon earned three points in the CAA standings and now sits in a tie for third with a total of four points. This Phoenix, now 1-1-1 in conference play, must finish in the top six at the end of the regular season to qualify for November’s CAA Tournament.

“It’s a good feeling to get three points,” Payne said. “It’s a good conference from top to bottom, so you’ve got to come in prepared for these games.”

Elon (6-4-1) returns to host the Towson University Tigers on Sunday, Oct. 10 at 1 p.m on senior day at Rudd Field. The Phoenix will honor seven players before kickoff in a senior ceremony.