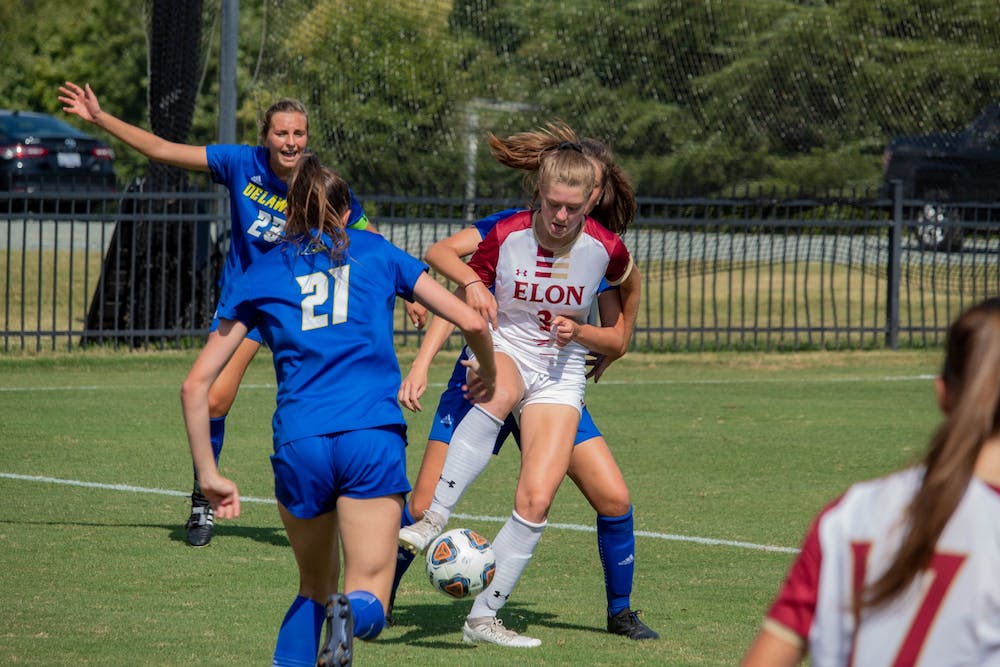 The game went to double overtime, with neither team able to secure the victory after 110 minutes of play.

Head Coach Neil Payne said he was pleased with the team’s movement and said the team did a good job retaining and moving the ball. He said the team’s biggest issue was not being aggressive enough on the backline.

Payne said the team will look to work on finishing scoring chances and not giving up goals moving forward.

“We’ll get to work,” Payne said. “We can’t fault our energy and our effort. A lot of players played really, really well today.”

At the end of the first half, the score remained 0-0 with Elon edging Delaware in shots, three to two. Both teams picked up the pace in the second half, combining for 17 shot attempts in the period.

Delaware’s Katie Hackley scored the first goal of the game during the 64th minute, but senior midfielder Carson Jones quickly answered for Elon in the 66th minute, scoring shortly after a free kick from Lily Harkes to tie the game, 1-1.

Following a pair of 10-minute overtime periods, the game remained scoreless. While Elon edged Delaware in shots, 15-12, it was not enough to win the game.

Jones said the team can improve on finding ways to convert their setups into goals, but was proud of the team’s offensive performance in the second half and overtime.

“We had so many chances and played really well,” Jones said.

Elon is still looking for its second win over Delaware in program history, as the Phoenix are now just 1-4-2 all-time against the Blue Hens. The only win came in 2017.