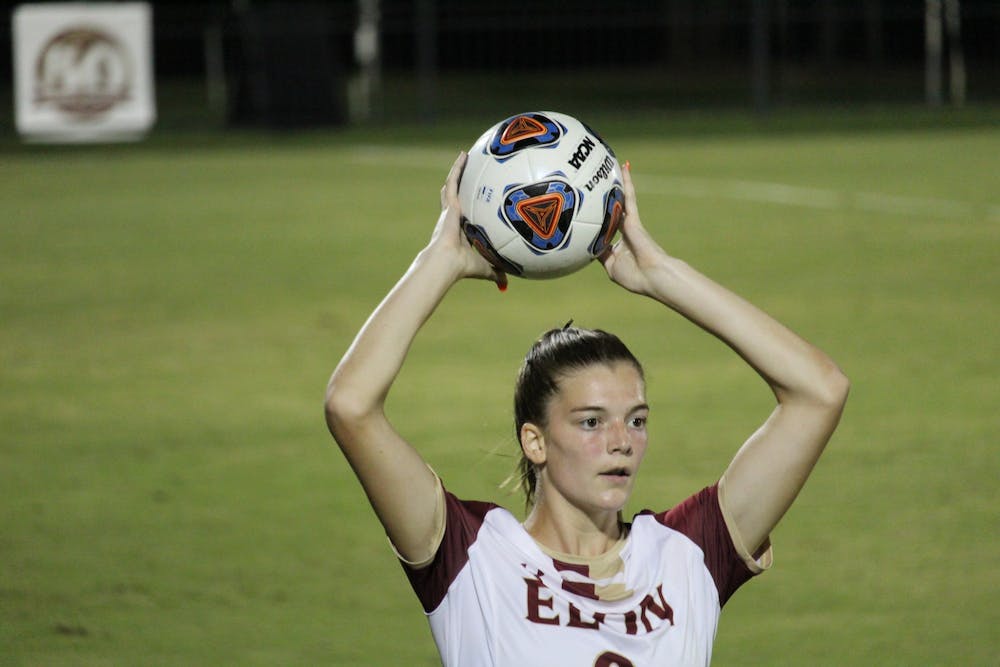 Photo by Joseph Navin | Elon News Network
A soccer player for Elon University prepares to throw a ball at the game against UNCG on Aug 22.

Senior forward Carson Jones secured the Elon victory, scoring the game winning goal in double overtime thanks to an assist off a free kick from redshirt senior midfielder Hannah Doherty.

The Phoenix had just two shots on goal the entire match, but scored on both of them. Head Coach Neil Payne said he was impressed with the overall execution of the team, especially with the team’s defensive effort.

“As long as we controlled where the pressure was coming from, we knew we could handle it,” Payne said.

Possession went back and forth for the duration of the first half, with neither team scoring until the Pride received a penalty shot as a result of a handball foul on junior defender Samantha Dominguez in the 56th minute, which they converted.

Freshman goalkeeper McKenna Dalfonso saved six of Hofstra’s 15 shots, seven of which were on goal. After allowing a Hofstra goal, she said she had to refocus herself.

“After the penalty kick went in, I knew I just had to stay calm and just keep doing my game,” Dalfonso said.

With time running out in the second half, Elon successfully tied the game, with freshman forward Lydia Totten scoring the first goal for the Phoenix in the 80th minute after a pass from sophomore forward Molly Mahoney bounced over the head of Hofstra's goalkeeper, leaving Totten with an empty net to kick the ball into.

Hofstra had a chance to win the game in the first overtime period, but Hofstra playerOlivia Pearse hit the left post on a shot that would have been the winning goal. The miss ultimately proved costly for Hofstra, as Elon went on to score the game-winner in the second overtime period.

Payne said he was pleased with Elon’s persistence, crediting the team’s ability to recover and persevere despite initial struggles. He said he is confident in the team’s chances moving forward.

“There’s no doubt today was all about grit, determination, resilience, character,” Payne said, “It was a commitment from the entire group, from start to finish.”

The Phoenix defeated Hofstra for the first time in program history last season in the Colonial Athletic Association Tournament semifinals 1-0, but this is the first time the team has overpowered the Pride in the regular season.

The Pride entered this match ranked 25th in the United Soccer Coaches poll, which ranks the best 25 teams in the country each week as voted on by Division I head coaches.

With 11 points, Elon now sits in fifth place in the CAA standings, just one point behind third and fourth place Northeastern University and James Madison University. The top four teams at the end of the regular season qualify for the CAA Tournament and only two spots are still available.

The Phoenix continue its chase to qualify for the CAA Tournament with a pair of road matches to close out the season, beginning with a crucial contest against James Madison on Oct. 28.