For the first time in program history, Elon women’s soccer is heading to the Colonial Athletic Association Championship game after defeating Hofstra 1-0 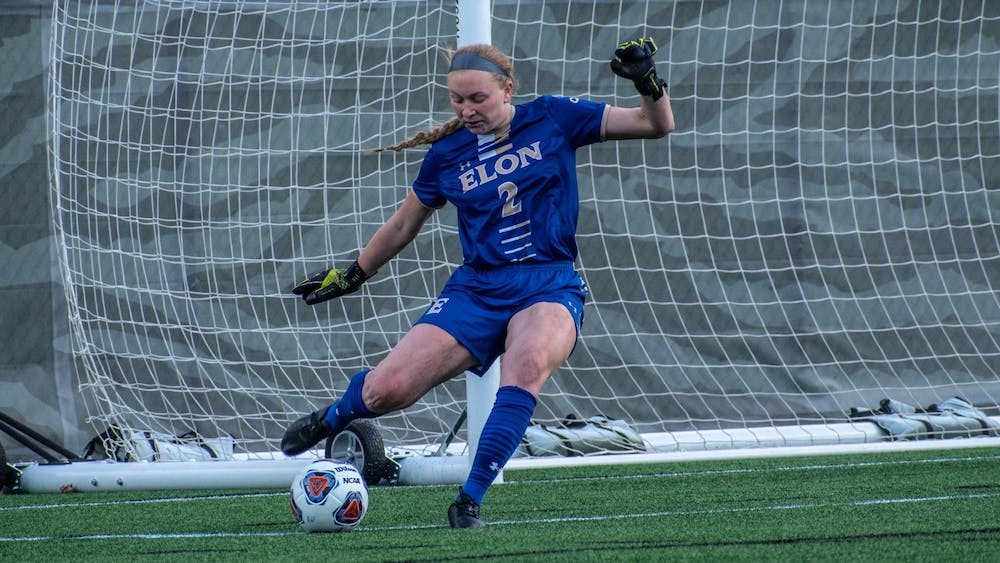 Elon Women’s soccer (5-3) advanced to its first ever CAA conference championship after defeating the No.1 seed Hofstra Pride (7-1-1) 1-0. The defense prevented scoring opportunities for Hoftsra and allowed the offense to lift Elon to the finals.

The Phoenix captured victory on the back of goalkeeping from its freshman goalie McKenna Dalfonso. The freshmen from Sewell, New Jersey denied the Pride seven times in this semi-final matchup. Up to this point Dalfonso, who started all seven games this year for the Phoenix, had only 14 saves in the year. She allowed the Phoenix offense to slowly wear down the Pride until they broke through in the 78th minute.

The game breaking goal that would cement the 2021 Phoenix team in the history books came near the end of the second half. Sophomore forward/midfield Beky Myers controlled the ball just outside the Hofstra box and lined up a shot.

With the game deadlocked at 0-0 the Phoenix were in desperate need of a break. Myers struck the ball with her right foot and sent the ball curling towards the top left corner of the goal. Hofstra’s goalie tracked the shot all the way in but before she could get a hand on it the ball ricocheted off the crossbar. The ball fell to the middle of the box.

Then in an instant sophomore midfielder Claire Broderdorp bolted after the loose ball leaving two defenders in her wake. Broderdorp had yet to score this season, but she didn’t let this opportunity escape her. She met the free ball with her right and buried it in the back of the net. Just as quickly as she scored her teammates swarmed her knowing full well that a championship birth was within their reach.

While Broderdorp and Dalfonso were key players for the Phoenix’s victory the defensive unit shut out Hofstra despite the offensive onslaught by the Pride. Hofstra ripped off 16 total shots during the game and the defense forced nine wide of the net. The defense also held off Hofstra’s nine corner kick opportunities.

The Phoenix offense did just enough to lift the team to victory. The goal in the 78th minute was one of only two shots on goal in the afternoon for Elon. In total, the team managed to get six total shots and two corner kicks.

The CAA finals on April 17  will be the Phoenix’s first championship appearance since they won the Big South Conference tournament in 1999. Their opponent will be decided later tonight in the second semifinal matchup between the University of North Carolina Wilmington and Northeastern University.