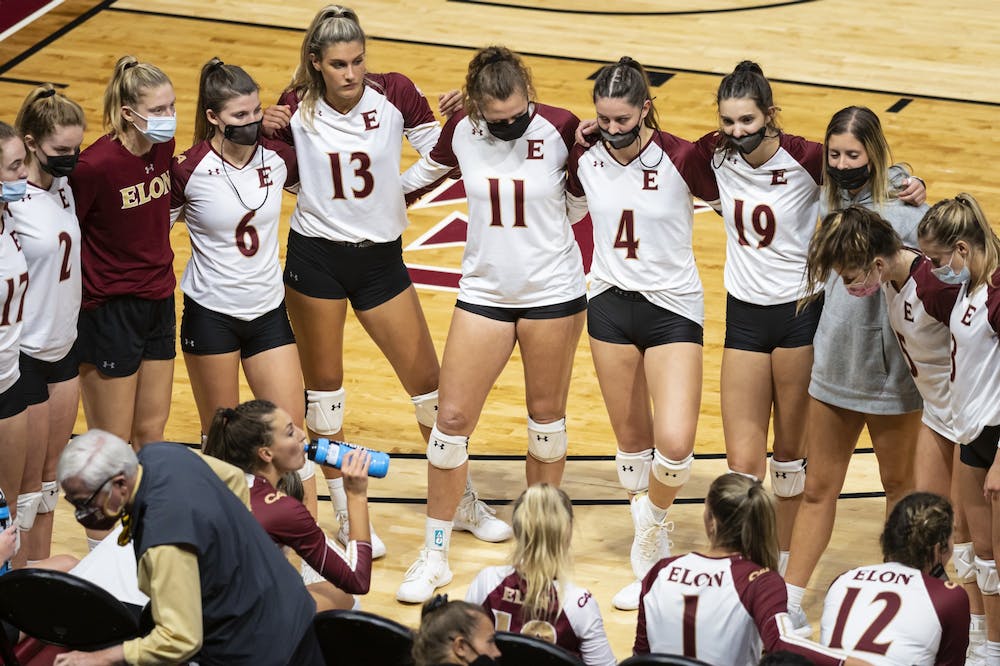 Elon University’s volleyball team celebrated its seniors on senior day by defeating the UNC Wilmington Seahawks in straight sets for its third victory in a row. The Phoenix improved its record in the Colonial Athletic Association to 8-2 with the win.

Early, the Phoenix and Seahawks were neck and neck, and were tied halfway through the first set at 13-13. However, Elon found its rhythm in the second half of the set and went on to win it 25-18.

Head Coach Mary Tendler said she stressed to her team the importance of getting off to a fast start and setting the tone in the first set.

“We learned our lesson last weekend actually in that first set against JMU,” Tendler said. “We had a lot of hitting errors and serving errors so we really tried to reduce our unforced errors and make the other team earn points. Then, we build their confidence and play better.”

The second set was also tight in the beginning, but Elon again pulled away late winning it 25-15.

The Phoenix started the third set on a 7-0 run and eventually took a 13-2 lead. They outscored the Seahawks 12-3 the rest of the way to complete the victory in straight sets.

Tendler said the Phoenix played with strong passion and worked well together throughout the match, which allowed the team to remain consistent in its execution.

“They’re just hungry and, they have been so consistent, rarely do they have dips in their play,” Tendler said. “All 16 of them are rooting for each other and if one of them is having a bad day another picks up for them. If one of us does well, the rest of them are happy. As a coach, it’s really nice to see.”

With the win, Elon holds a two game lead in the CAA standings over second place James Madison. The Phoenix hopes to continue its winning streak with two matches against the Northeastern Huskies on Oct. 23 and 24.