After falling in the first two sets, Elon battled to force a fifth, but came up short 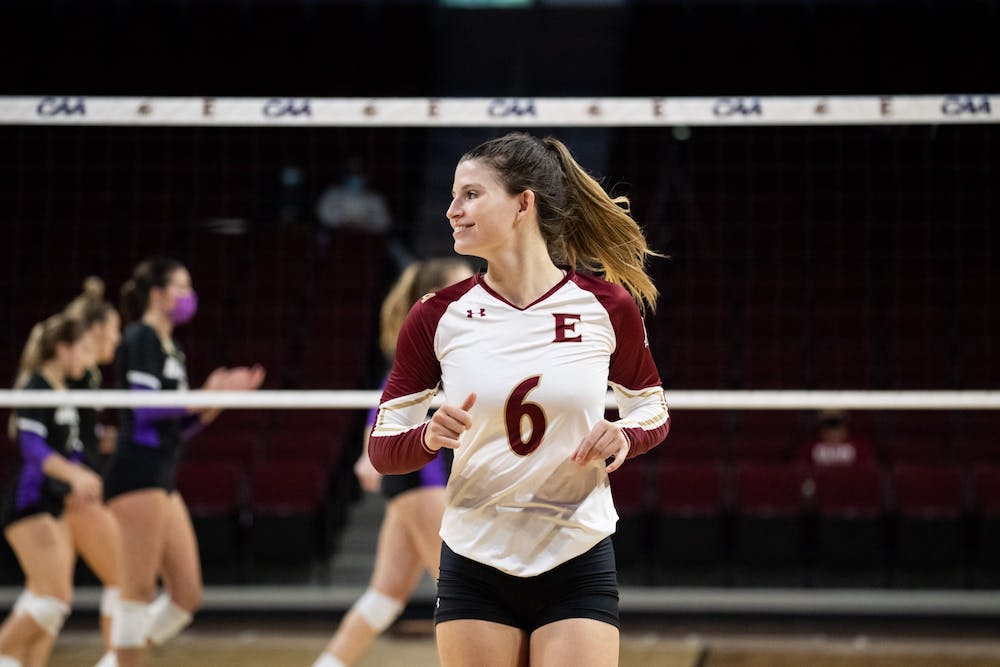 
James Madison registered 63 kills in the match, compared to Elon’s 56. The Phoenix were forced to dig out of tough holes early on, finishing the game with 27 attack errors and 10 service errors.

Elon University’s volleyball team (10-7) fell to the James Madison University Dukes (10-3) in a five set battle between the Colonial Athletic Association’s top teams on Oct. 9. After a rough start, losing the first two sets, the Phoenix rallied back to win the next two before ultimately falling in the final frame.

James Madison registered 63 kills in the match, compared to Elon’s 56. The Phoenix were forced to dig out of tough holes early on, finishing the game with 27 attack errors and 10 service errors.

“It was pretty obvious that we got off to a poor start,” Head Coach Mary Tendler said. “I like that we gave ourselves an opportunity to win and get it to a fifth set, but tomorrow we have to start out much better than today.”

James Madison set the tone early in the match jumping out to a 5-1 lead in the first set. Elon battled back, taking an 8-7 lead, but immediately lost it and never got it back the rest of the set.

The Phoenix struggled heavily in the second set, falling behind 8-4. The Dukes went on to record 13 kills to close out a 25-15 set win.

The Phoenix finally got rolling in the right direction in the third set with a 25-23 win, but it didn’t come easy. Late in the set, the Phoenix held a 20-14 lead, but the Dukes battled back to within one point. However, Elon managed to recover and keep the lead.

The fourth set proved to be a back and forth battle between the teams, ending with a hard fought 26-24 win for Elon. However, James Madison took back control of the match in the fifth set, scoring seven straight points to jump out to a 10-5 lead. Elon’s comeback attempt ended there, as the Phoenix lost the final set 15-10.

“We’ve got to serve and pass better,” Tendler said. “If we do that better, we have a great opportunity to win the match. But we were out of system often which allowed them to get a lot of blocks and defend better. If we can be more in system and more balanced on offense, we’ll be tough to beat.”

With the loss, Elon falls to 5-2 in the CAA and now sits third in the conference, while James Madison takes possession of first place in the CAA at 4-1. The Phoenix will get a shot at revenge tomorrow, as the two sides will face off again. The match is set to begin at 2 p.m.