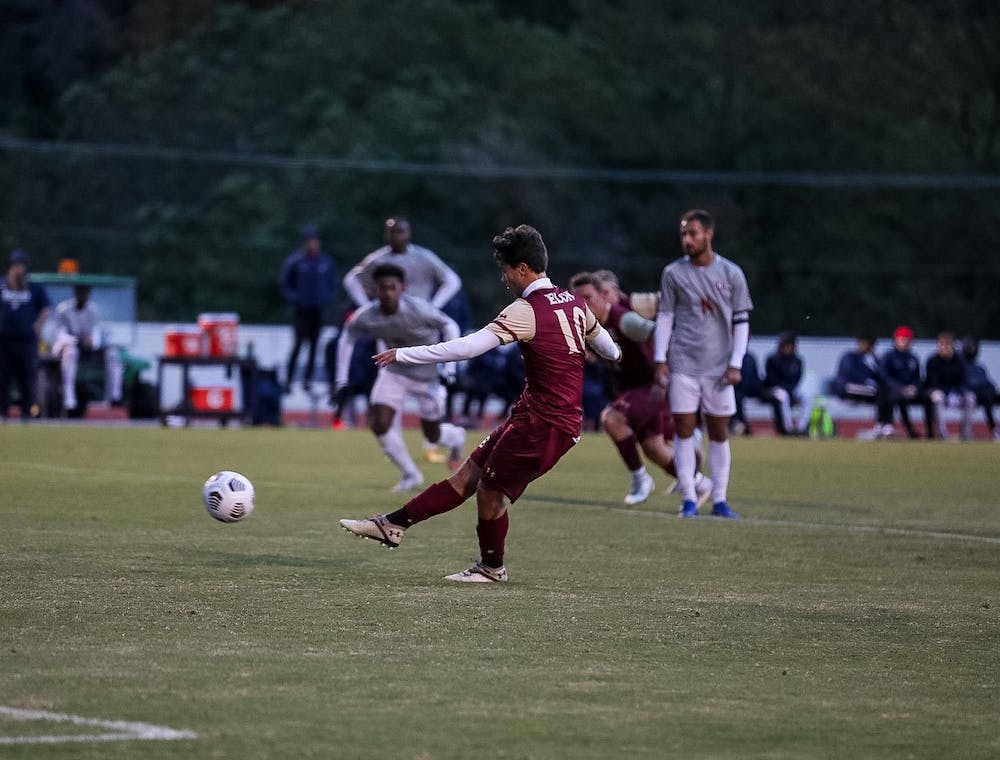 Freshman forward Calle Edelstam taking a penalty kick in the 18th minute against Radford. He converted it to give Elon a 1-0 lead. Courtesy of Elon University Athletics.

The Phoenix scored two first half goals to take control of the match. After a Radford player received a red card for touching the ball with his hand in the penalty area in the 18th minute, freshman forward Calle Edelstam converted on the ensuing penalty kick for his third goal of the season to put Elon on the scoreboard. The red card forced the Highlanders to play the remaining 71 minutes with just 10 players.

Sophomore forward Jack Dolk scored in the 30th minute to give Elon a 2-0 lead. He received the ball on a rebound after Radford’s goalie stopped an initial scoring opportunity from junior forward Mason Duval. It was Dolk’s second goal of the season and first since Sept. 15, against High Point University.

Elon kept the momentum going in the second half against a shorthanded Radford team, as sophomore defender Ben Rosenblatt scored his first career goal off of a pass from Edelstam in the 51st minute. The Phoenix shut down the Highlanders for the remainder of the half to secure a shutout victory.

The Phoenix dominated the match throughout, outshooting the Highlanders 28-2 with 13 of those shots on goal. Radford’s final shot attempt came in the 16th minute.

Redshirt freshman goalkeeper Cam Pelle made his second consecutive start for the Phoenix and made two saves. Redshirt junior Peter Wentzel entered to play the second half, but did not face any shots.

This was Head Coach Marc Reeves’ first game against his former team, as he served in the same role at Radford from 2010-2016. He compiled a 75-43-20 overall record with the Highlanders and helped the school qualify for two NCAA Tournaments in 2015 and 2016.

With the victory, Elon improves to 7-6-2 and finishes its regular season with a pair of Colonial Athletic Association matches. The Phoenix will celebrate Senior Day in the team’s final home game on Saturday against Hofstra before taking on William & Mary on Nov. 6.