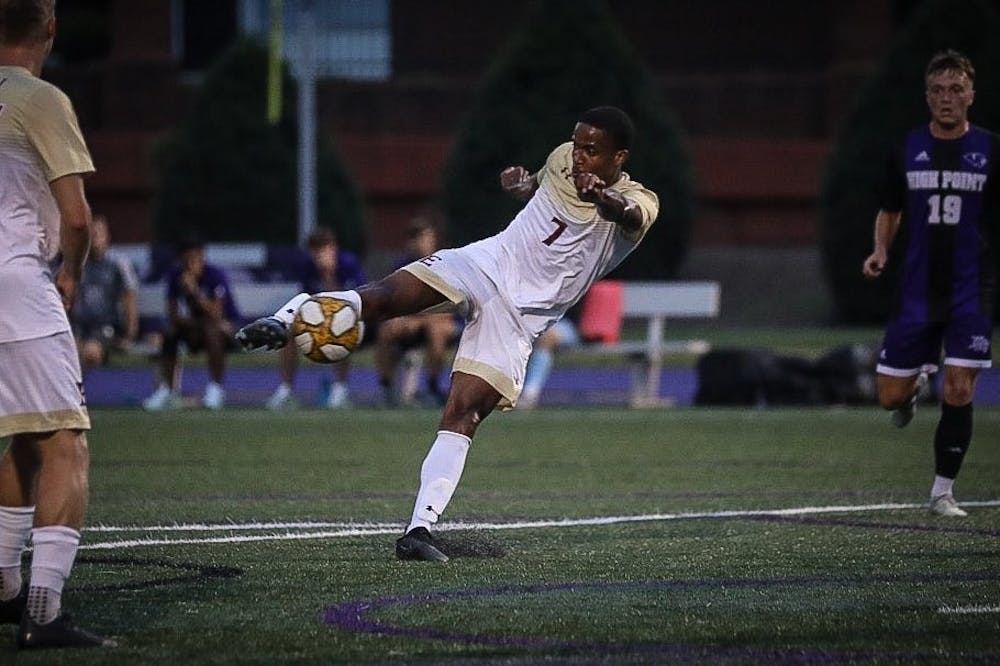 Redshirt junior midfielder Jalen Weatherspoon taking a shot in the first half against High Point. Courtesy of Elon University Athletics.

High Point, NC — Elon University’s men’s soccer team attempted to rise from the ashes Wednesday night against High Point University, scoring two goals in the final eight minutes to take the rivalry matchup into extra time. The Panthers eventually proved too much for the Phoenix, though, as High Point midfielder Alex Abril scored in overtime to win the game, 3-2.

Elon spent two thirds of the game playing with only ten men, as in the 30th minute, freshman midfielder Seth Hammond picked up a red card. Hammond was standing near redshirt freshman goalkeeper Cam Pelle in the goal when he inadvertently saved a High Point goal using his left forearm. High Point midfielder/forward Sebastian Chalbaud converted the ensuing penalty to give the Panthers an early lead.

High Point’s front line gave Elon trouble throughout the game. Because they were playing with ten men, the Phoenix had to sit back and defend, and the Panthers took advantage whenever they could. High Point freshman Caco Fernandez scored his first goal of the season to give the Panthers much-needed cushion in the 65th minute.

Momentum began to swing toward Elon near the end of the second half. Sophomore forward Jack Dolk found the back of the net from a cross in the 82nd minute to get the Phoenix on the scoreboard.

Elon’s final corner of the half came in the 84th minute, and sophomore midfielder Josh Francombe capitalized with a goal  to tie the game. Both keepers made acrobatic saves in the closing moments of regular time and the teams headed to extra time.

The teams began overtime trading counter-attacking opportunities with both Chalbaud and Dolk creating scoring chances for their respective teams. The Panthers broke the deadlock, though, as Abril beat Pelle on the far post from seventeen yards away to end the game.

The Phoenix, now 3-3, travel to Charleston to take on the College of Charleston Cougars Saturday Sept. 18 at 2:00 P.M. before their three road game swing ends in Radford, VA on Sept. 22.