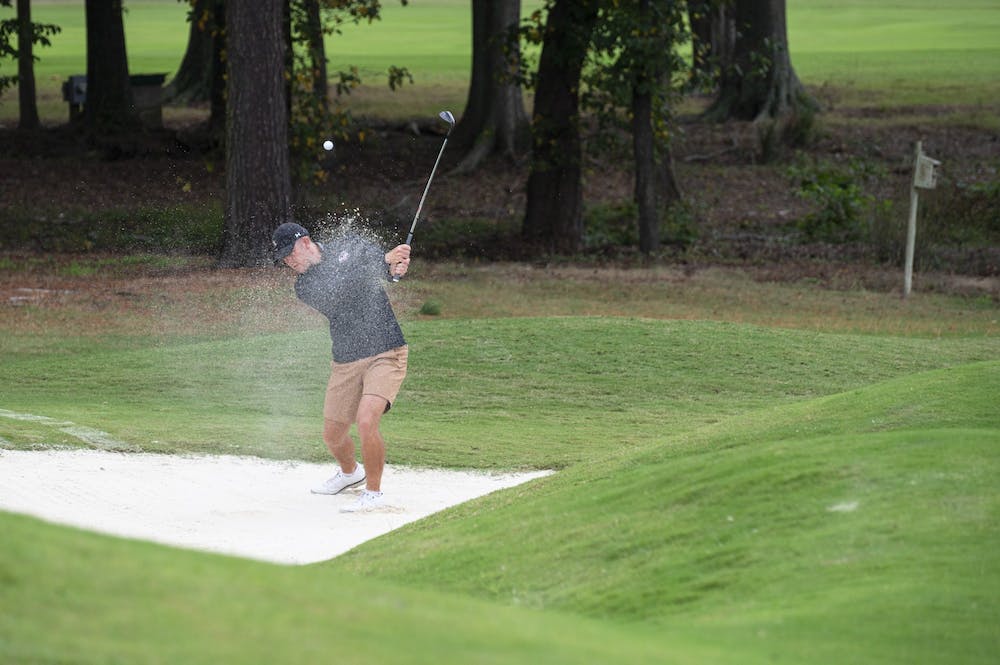 
An Elon University golfer hits from a sand trap on hole four at the Alamance County Club during the Elon Phoenix Invitational on October 12, 2021.

The Phoenix shot a 12-over par 300 in the final round to drop from first to fifth place in the team competition at the Grandover Resort in Greensboro, North Carolina. Elon shot the low score of the second round (281) to take a two shot lead into the final round, but was unable to continue that momentum Sunday, finishing the event with a total score of 865.

None of the four Elon players that contributed the team’s overall score broke par in the final round. Sophomore Garrett Risner paced Elon’s individual finishers, placing sixth on the individual leaderboard with a total score of 211. Junior Bronson Myers tied for 12th place with a total score of 216, with redshirt senior William Frodigh and freshman Juan Callejo Ropero rounding out Elon’s team scores with totals of 218 and 220, respectively.

Sophomore Pedro Rabadan was the fifth Elon player contributing to the team’s overall score in the tournament. However, he withdrew after shooting scores of 77 and 81 in the first two rounds, meaning the Phoenix had just four players competing in the team competition in the final round instead of the typical five. After each round, the four lowest scores are added up to produce a team’s overall score.

This was the final match of the fall season for Elon’s men’s golf team, with the spring schedule yet to be announced.