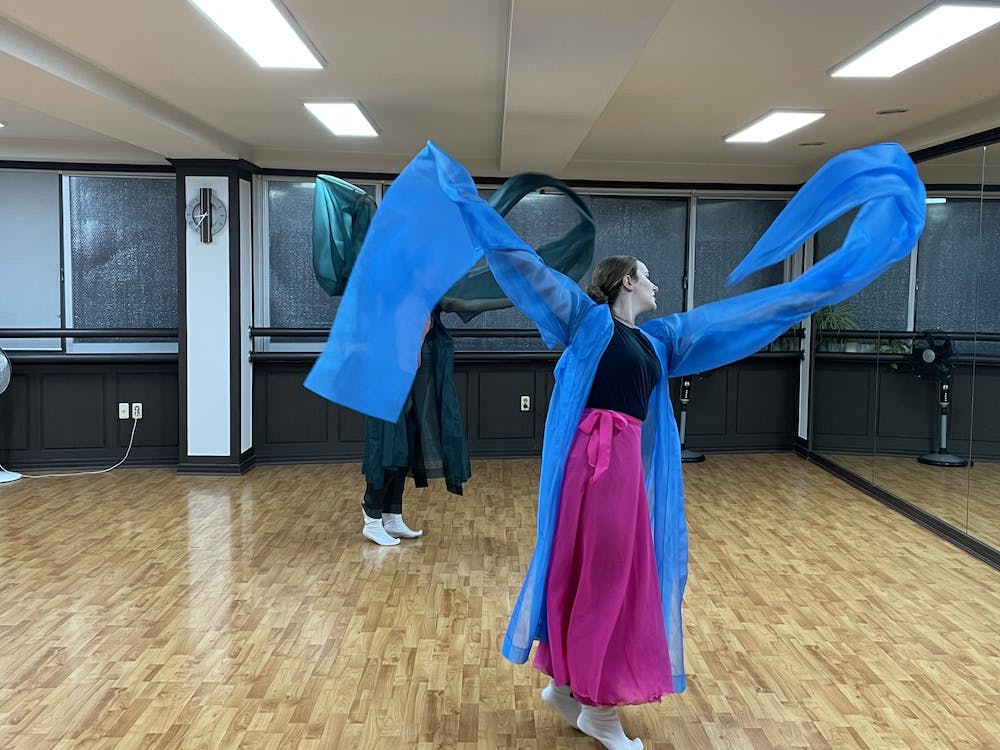 Senior Emily Wilbourne learns Seungmu, a national Korean folk dance, in Busan, South Korea. Wilbourne spent the summer in Korea studying the dance history of Seungmu, and she will present her findings at the Tradition & Innovation in Korean Dance event on Thursday, Oct. 28. Courtesy of Emily Wilbourne.

Senior Emily Wilbourne spent the summer dancing in Busan, South Korea. Studying Seungmu, a national Korean folk dance, Wilbourne combined her interreligious studies and dance minors with the Multifaith Scholars program, where she conducted interviews on how a dance that was initially performed by Buddhist monks came to be a widely performed cultural presentation.

Wilbourne will present her research on Thursday, Oct. 28, at the Tradition & Innovation in Korean Dance event, sharing the richness and depth of Korean dance both then and now.

“It's such a rich field of dance with so much cultural, social and religious implications,” Wilbourne said. “I really like digging into this research over the last two years, I feel like I'm constantly learning something new.”

“Emily is just exceptional. She's so intelligent. She's a beautiful writer,” Avaunt said. “I think she just really impressed me with her high level thinking. I learned that a lot of students are really high level, and they can do this research, and they're very professional, they can go to another country and do ethnographic fieldwork.”

While this event will recognize Wilbourne’s studies, it will also highlight adjunct instructor in performing arts Jiwon Ha. Ha, who is from Busan, South Korea, virtually guided Wilbourne while she studied there in both the fall and the summer.

“I could not have done it without her help,” Wilbourne said. “Her sister actually ended up being my interview translator, which was just like, what a perfect Elon connection.”

Since Wilbourne was the first student in 10 years to study abroad in South Korea, Ha helped her navigate the program, where she assisted in finding sources for Wilbourne’s research. Ha said her drive to serve as another mentor to Wilbourne came from wanting to spread her culture.

“Why do I have a strong desire to share my culture? It’s because people don’t actually care about it that much,” Ha said. “I think it’s very important for students to see more cultures. The more they know, the more they see. They have better eyes for the world, different culture forms … If they don’t educate, they’re not going to see anything happen in the world. I want them to educate and see more.”

Along with Wilbourne and Ha, Korean guest artist, Hyoin Jun, will share his contemporary artistic expression through the performance of his piece, “Battery.” Avaunt, who is moderating the event, said she hopes the lecture-demonstration will give a variety of experiences to those attending.

“Between the three of them, they are covering a wide landscape of Korean dance practice,” Avaunt said.

The event will showcase Wilbourne's ethnographic research on Buddhist origins. Ha will also demonstrate a selection of traditional Korean dances, as well as a performance of Korean fan dance featuring Elon dance students.

Ha hopes by sharing her culture and different choreographic elements used in Korean traditional dance, this event will open doors for people who aren’t familiar with the country’s history of dance.

“Like all other folk or traditional dance forms, we have a very rich culture, it’s very old history,” Ha said. “I think students here are ready to globalize. When they are away from this beautiful community, I want them to see more culture.”

Wilbourne said she saw that rich culture in dance history when she studied in Korea.

“If you look at Korean dance as like a group, there's so much more depth to it than just grouping it like that,” Wilbourne said. “You end up becoming a lot more empathetic for people from other cultures because you have a more personal connection to it.”

The event was also created with the goal of promoting a more diverse intellectual climate on campus, and different organizations across the university have collaborated in putting this together — Elon’s Dance Program, the Division of Inclusive Excellence, the Center for Race, Ethnicity, & Diversity Education, Department of Asian Studies and the Center for Study of Religion, Culture and Society. The collaboration for the event will also recognize social issues that occurred this past year relating to anti-Asian hate crimes.

Returning to Elon’s campus this fall, Wilbourne said she feels more culturally competent, and is looking forward to sharing what she’s learned so that others can achieve that as well.

“Not many people are going to go to Korea in their lifetime,” Wilbourne said. “But maybe they’ll come to this Korean dance event and feel like they've received that knowledge, or a portion of that experience and at least understand why it's valuable and how it has impacted people, even if it doesn't directly impact them.”