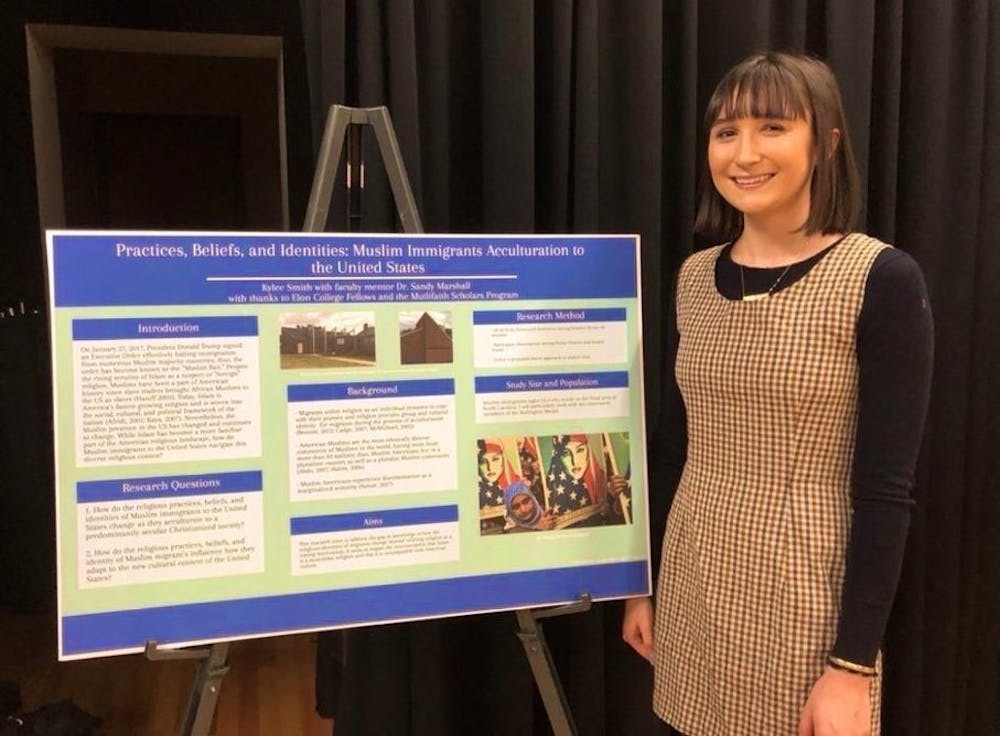 In 2018, senior Kylee Smith spent the summer interning at Refugee Resettlement, a group which responds to humanitarian crises and helps individuals displaced by international conflict. While there, she was able to build intercultural relationships with Muslim refugees and assist them with adjusting to life in the United States. Smith’s experiences working with refugees shaped her curiosity in learning about the culture of Muslim majority nations and inspired her to research migrants’ process of acculturation to the United States.

“That really piqued my interest and so I started to research more about some migrants and Muslim immigrants and their acculturation process to the United States,” Smith said.

Smith and junior Katie Grant are multifaith scholars and Elon college fellows who are utilizing their knowledge of religious studies to examine how faith is influencing local communities’ cultures.

The Multifaith Scholars Program at Elon is a two-year program in which students undertake experiential and engaged learning around multifaith issues, such as the effect of relocation on religion and Christian Identity’s influence on shaping religious beliefs. Each multifaith scholar takes part in research projects aimed toward gaining a deeper understanding of how faith has impacted the cultural experiences of religious groups. Current research projects include “Practices, Beliefs, and Identities: Muslim Immigrants’ Acculturation to the United States” and “Analyzing Recruitment and Retention Techniques of Christian Identity Extremist Groups in an Online Context.”

Students who have indicated an interest in religious studies will apply in the spring of their sophomore year to be a multifaith scholar. During the application process, students generate original research project ideas and identify a desired mentor they want to assist them with the project.

Students then write up a proposal of their research project which will be looked at by religious studies faculty, including Amy Allocco who is the founding director of the Multifaith Scholars Program. Allocco, along with other faculty members, then interviews each applicant to see who would be the best fit for the program.

Typically, five students are accepted into the program each year. Grant and Smith said Allocco greatly assisted and helped them during the application process.

After becoming multifaith scholars, students work with faculty mentors to refine their projects and match their ideas with other opportunities, such as summer undergraduate research experiences and foreign language training.

When speaking about research projects, Allocco said it allows students to engage in a creative outlet and develop projects that match with students’ key interests.

“The possibilities are pretty endless. Students have created documentaries and photo exhibits, like a ‘Humans of New York’ style photo exhibit,” Allocco said. “Students have a lot of scope to engage in creative outlets and to develop products and outcomes that really match their aim and also the desires of the communities with whom they’re working.”

Grant and Smith are currently working on research projects centered around how faith is impacting the cultures, practices and beliefs of different religious groups.

Grant chose for her project to examine the patterns of “Christian Identity” groups because the subject matter combines data analysis and history, her two favorite subjects. “Christian Identity” is a right-wing religious ideology described as “Christian in name only” and “antisemitic” by the Southern Poverty Law Center.

Grant is working on the project alongside Megan Squire, a professor in computer science who studies how online communities, such as extremist groups, function.

A major component of Grant’s online research is Telegram, a messaging platform she said may be a breeding ground for the spread of propaganda and retention materials for Christian Identity groups. In her research, she is looking at public channels on Telegram and said a lot of the things she is examining have caused her to dissociate from what she is studying.

While Grant chose to study the patterns of Christian Identity groups, Smith opted to research how Muslim immigrants are adjusting to living in a multi-religious setting.

“I’m utilizing the fields of interreligious studies, migration studies and human geography to provide an understanding of their experiences and trying to emphasize that religious identity is not a barrier to acculturation in the United States,” Smith said.

Alongside her mentor, Sandy Marshall, she is working with resettled Muslim immigrants to understand how their migration to the United States shaped their current religious beliefs and practices.

This summer, Smith interviewed 16 Muslim immigrants in the Piedmont Triad area of North Carolina. She asked the immigrants about their cultural and religious beliefs in order to make comparisons between the values and customs of Muslim-majority nations and the United States.

Smith concluded immigrants’ encounters with non-Muslims caused them to constantly evaluate their own practices and beliefs, blending values and customs of Muslim-majority countries and the United States.

“Their everyday encounters with non-Muslims and just the everyday calendar and work schedule in North Carolina prompts them to critically evaluate their own beliefs and determine how to practice Islam most fully in this new cultural context,” Smith said. “They actually strengthen their faith, and there’s a moment of kind of choosing it for themselves.”

Both Grant and Smith are working toward understanding different religious ideologies and embracing religious diversity through examining the patterns of religious groups in their research projects. When reflecting on the importance of multifaith, Smith explained how the program has helped her to gain a deeper understanding of religious communities around the world.

“Engaging with communities that are different than you are the most impactful and transformative learning experiences,” Smith said. “I think it’s really imperative to know and be able to interact with cultures and religions that are different from you.”