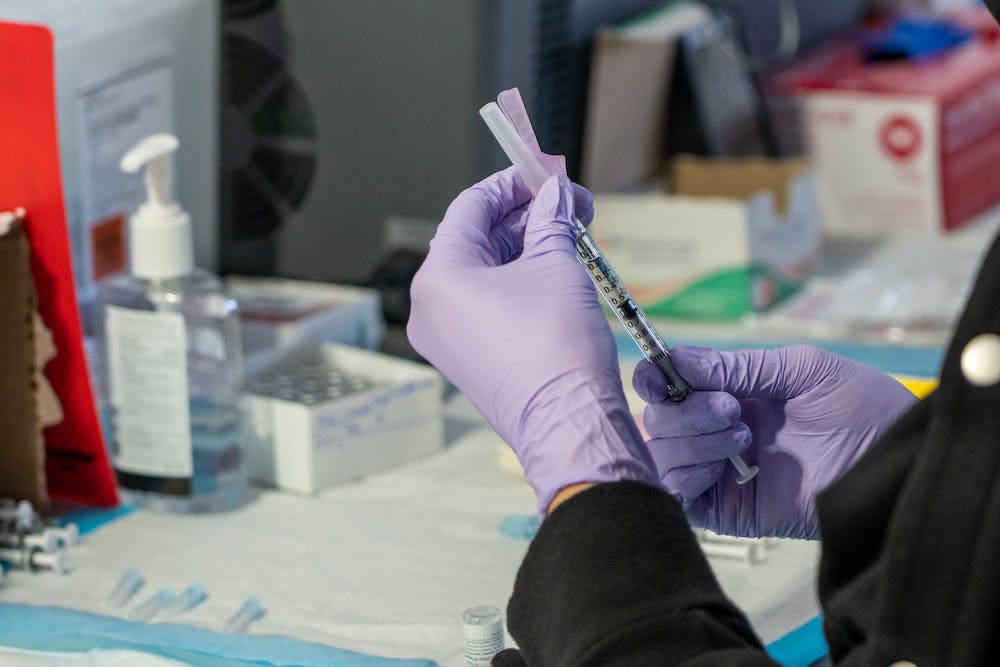 
An Alamance County Health Department worker fills a syringe with the Pfizer COVID-19 vaccine on Monday, Jan. 18 at the Career and Technical Education Center in Burlington, North Carolina. The health department administers both Moderna and Pfizer vaccine on different days depending on supplies.

Vaccine exemptions forms rolled into Dean of Students Jana Lynn Patterson’s email when the university declared a COVID-19 vaccine mandate for all students. While the university reached 96% of its undergraduate students fully vaccinated, only 307 vaccine exemptions were approved. There’s an additional number that Elon has reached: zero student disenrollments after the vaccine requirement.

Unlike University of Virginia’s disenrollment of over 200 students who didn’t meet the school’s vaccine mandate, Elon students complied with mandatory vaccinations by either getting immunized or filling out an exemption form. Students who would not comply would have been disenrolled prior to the start of the school year, according to Patterson.

“I talked through this with lots of parents this summer, and they said, ‘We want to see how we can make this work,’” Patterson said.

The university’s announcement on Facebook about the mandate in June sparked a reaction for some users, ranging from professors agreeing through comments to other users questioning the university’s new requirement. Some Facebook users opposed the mandate, commenting questions about vaccine liability and why the mandate does not include faculty and staff.

In addition to zero disenrollments, Rodney Parks, university registrar, said that Elon has not seen any withdrawals from the university due to the vaccine mandate this year. Parks said he could not identify Elon’s finalized enrollment numbers for the 2021-22 academic year until the registrar report is released in early September.

“There are students out there that are not ready to come back to on-campus classes,” Parks said.

Exempt from the vaccine

According to Patterson, COVID-19 vaccine exemption forms were approved prior to the start of the academic year –– 80 were due to medical conditions and 227 were for religious reasons. Patterson said she could not provide a finalized number of rejected exemption forms.

For enrolled students who didn’t get the vaccine, the university received different reasons on a case-by-case basis. Medical exemption forms must have included a written statement explaining the student’s medical concerns along with approval from their physician. Religious exemptions also required a written statement, but of the student’s bona fide religious beliefs and opposition to the immunization. Patterson went through each exemption form this summer, analyzing medical and religious conflicts.

“I had one student send me 18 pages,” Patterson said. “There are legitimate reasons for some folks why this is not the time to take this [vaccine], whether it’s a religious belief or a medical condition.”

Medical exemptions for some students include known allergic reactions to vaccines, students undergoing treatment, delays due to emergency surgeries and more. As for religious reasons, every religion has different interpretations of vaccine objections, according to University Chaplain and Dean of Multifaith Engagement Kirstin Boswell. Although she was not part of the religious exemption form process, Boswell said those with a religious background could understand why faith can intertwine with objections to immunizations.

“One of the reasons why institutions don’t ask people to provide proof or documentation is because you can’t,” Boswell said. “It’s up to that person’s conscience and how they are interpreting their religious doctrine as it pertains to things like vaccines.”

According to Vanderbilt University Medical Center, religions with a theological objection to vaccines include dutch reformed congregations and faith healing denominations such as Faith Tabernacle, Church of the First Born, Christian Science and more. Elon University includes a wide range of religious affiliations, with 1,623 students identifying as Catholic, 489 as Christian and 537 as Jewish, according to the 2020-21 University Factbook. Ninety-three students identified with other religious affiliations, and Elon recorded 2,086 unknown religions.

Required for some, not for all

Though Elon has reached 88% of full- time employees fully vaccinated, the vaccine mandate does not pertain to them. Patterson said the requirement for students, and not faculty and staff, is due to the congregate living habits in residence halls and off- campus housing, along with student social circles. Students, faculty and staff that are not vaccinated are required to wear masks indoors on campus at all times, even if, or after, Elon’s mask mandate is lifted.

“This does not penalize them. This is because we know they’re the most vulnerable and we need to protect our community,” Patterson said.

Senior Alexandra Stoll, a public health major, said learning about the spread of diseases and viruses all started during Elon’s mumps outbreak in 2019. Since then, understanding the importance of a population getting vaccinated is one of the prime ways to stop the spread of COVID-19.

Patterson said it’s possible that the university will revisit the idea of requiring faculty and staff to get vaccinated now that the FDA has given full approval to the Pfizer vaccine. Down the road from Elon, Duke University recently required all employees to receive the vaccine or else face termination. The university will also reach out to students who are currently exempt from the vaccine to reconsider receiving it.

“We know that the vaccine works in decreasing the spread of the virus, but also decreasing the severity of symptoms in what could be a pretty vulnerable population,” Patterson said. “We have faculty, staff and students that fit some of the high-risk categories. I’d like to think that our students are kind and sensitive enough that they would never want to put someone at risk.”

Joann Gruber, assistant professor of public health studies, said she believes the mandate should be extended to faculty and staff, especially as Delta cases are increasing around the county. Before the academic year, Gruber also wrote a piece to her students on the importance of wearing a mask indoors is still important, regardless of vaccination status.

“I think we need to be strict about exemptions, but I don’t control that, personally,” Gruber said. “We’re all fighting this virus. We’re in a war against this virus. We really have to come together to do what we can. We’re all tired, we’re all sick of it, but none of us want to be in this position. We have to think about how it’s not going to get better unless we can stop the spread.”

According to the latest weekly Healthy Elon update, 14 new COVID-19 cases were confirmed among Elon students and employees during the week of Aug. 23. Patterson said the first few cases of the year were from prior move-in testing and students facing symptoms during their first few days of campus.

As COVID-19 cases increase in Alamance County and around the country, Patterson suggests that those who are not vaccinated consider those around them and the importance of keeping others safe. As for those who are vaccinated, now is the time to understand why the vaccine isn’t an option for everyone.

“This is not a time to exclude folks,” Patterson said. “This is a time to engage them in conversation about what we are going to work out here from a safety standpoint.”