Following the events of 9/11, the religion of Islam faced labels of terrorism and extremist groups 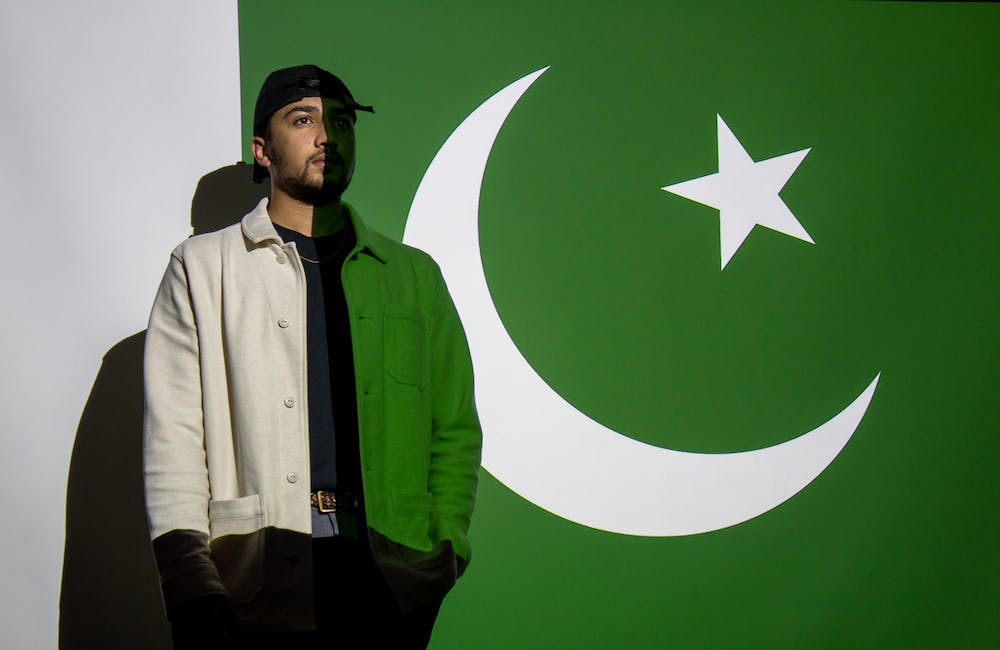 Photo by Laney Daniels | Elon News Network
The Pakistan flag behind junior Zain Khan not only represents his Pakistani culture, but his faith and culture as a Muslim. Growing up, Khan knew his religion and culture was different than others.

Elon University junior Zain Khan was in kindergarten when his mom pulled him out of public school and transferred him into homeschool learning. This wasn’t because of the education system he was in. It was because he and his parents are Muslim.

Immediately following the terrorist attacks on Sept. 11, 2001, Khan’s parents were one of thousands of Muslims across America who faced religious and ethnic discrimination. 20 years later, some of the preconceived negative feelings about Muslims still exist.

“Any time someone hears the word Muslim, they already have predefined defintions of what it could mean,” Khan said. “With that growing up, you face discrimination.”

Born in Indianapolis and now a resident of Cary, North Carolina, Khan always knew he was different from others around him — from his skin tone to his culture. But each year, he said the anniversary of 9/11 is a reminder that his religion has been politicized and placed in a negative light. When he came to Elon’s campus as a minority, Khan only noticed it more.

“Not only am I not white, but I’m also Muslim,” Khan said.

Though he doesn’t remember facing many instances of ethinic discrimination growing up, there was one moment from when he returned to public school after five years of being homeschooled that stuck out.

“I remember when our fifth grade class had talked about 9/11,” Khan said. “There were certain jokes that were made because people could tell I was brown or Muslim. The only time Muslims are really talked about is when it’s about terrorism, which shines a very negative light on them to begin with.”

Khan joined Elon Muslim Life to not only continue his faith, but also to have conversations about the differences Muslims face in America after 9/11.

Imam Shane Atkinson of Elon Muslim Life said that as he mourns the 2,977 lives lost from 9/11 every year, he also mourns the loss of connection with his family of various faith traditions.

Sophomore Naz Shokri said she feels people often forget that generalizing a group of people and set of actions are two different things — something that has happened to many Muslims across America since 9/11.

“The Islamic faith is rooted in kindness and love and appreciation,” Shokri said. “This is something that people often disregard because they think, ‘How can someone who is Muslim create such a terrible event like 9/11?’ But then you can also go back and say, ‘How can a Catholic shoot up a school?’ It’s the same thing, you can’t make a generalization of Islamic people just like you can't make a generalization of one Catholic person.”

Khan suggested the first step in combatting negative associations with Muslim identities is having conversations understanding the kindness and appreciation of Islam.

“I think the biggest issue is people not willing to learn more or put in the effort to get to know more,” Khan said. “Some people don’t really understand the mental toll it takes on a person when you’re constantly bashed.”

Imam Shaher Sayed of the Burlington Masjid came to the United States from Palestine, where he studied business and later turned his career into serving others. As Sayed assists those around him in understanding more about Islam, he said he is reminded that his religious identity has been stereotyped, but it’s all about how one goes presenting their faith.

“Wherever you act, whenever you act, make sure it reflects the faith you carry,” Sayed said. “That’s how I go about dealing with people. I try to be a Muslim in action more than a Muslim in talk.”

Reflecting on the anniversary of 9/11, Sayed said he will always remember his initial thoughts when the attacks happened.

“It was a wake up call for Muslims,” Sayed said. “The immediacy of it and the backlash, it was towards Islam and Muslims. What came to my mind is what happened to Japanese people during the World War [II]. Are we going to be pushed out and put in camps? Or jail? Or thrown out of the county? I have a family. I have kids. This is their country. You start having a sense of lack of security. It wasn’t easy.”

Unfortunately, that lack of security is still in place for many Muslims today, according to Sayed.

“The fear is always going to be there because the media is not changing. What dissipates the fear is when we take our faith in our hands,” Sayed said.

Sayed said the Masjid is open to everyone of all faiths and that it serves as more than just a religious location, but that it’s also a community where people can come and learn more about each other. Since it opened in Burlington in 2014, the Masjid now fosters a community of almost 300 families.

Open to other families as well and Muslims in the Raleigh, Durham and Chapel Hill area, Khan, his father and friends began Triangle Muslims, an organization that gets Muslims out into the community and changes people’s perspective of Islam and removing negative biases against Muslims.

“It’s your choice to be what religion you want, but it isn’t your choice to receive discrimination towards you,” Khan said. “I think it’s important for people to realize that you can’t label an entire group of people just because of the actions of a few.”