A look into Alamance County's only mosque 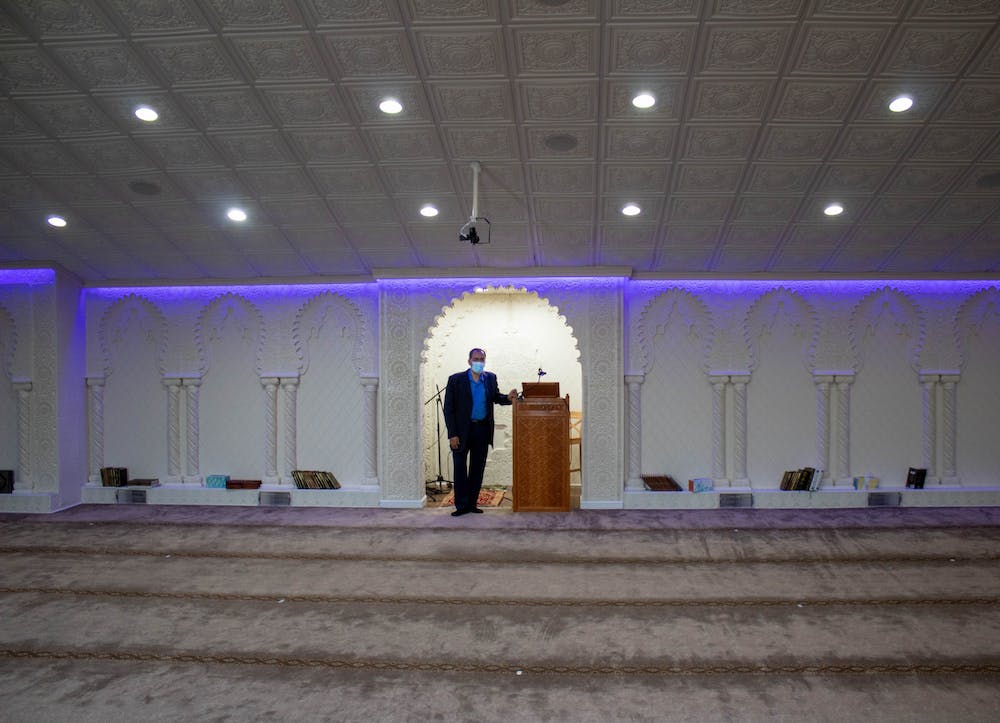 Photo by Grace Terry | Elon News Network
Imam Shaher Sayed stands in the Burlington Masjid on Nov. 13. This is where he now leads prayer over Facebook Live rather in front of people due to the COVID-19 pandemic.

There was pushback when Shaher Sayed and his community tried to acquire a building that once was a church.

The pushback came from “a group in the community that didn’t comprehend the idea of having a Muslim church or a mosque here,” Sayed, the imam for the Burlington Masjid, said.

But Sayed said he chose to deal with it in a positive way.

One of his favorite memories from his time at the masjid was changing one of those hearts. During the opening of the new space for the Al-Aqsa Community Clinic — a free health center located in the masjid that treats people who do not have health insurance — one the mosque’s critics had come for a tour.

“He’s talking to me and I noticed a change in the tone, and I looked back and the gentleman had really tears in his eyes saying ‘I didn’t know that about you,’” Sayed said. “That was one heart, but it meant a lot.”

The Burlington Masjid is the only mosque in Alamance County and serves the about 300 Muslim families from 45 different nationalities in the area, according to Shaher Sayed.

“There is no other place for the Muslims to congregate and a lot of our prayers require or are prepared in the congregation,” Shaher Sayed said.

Located on Mebane Street in Burlington, Shaher Sayed and his family acquired the building — which used to be a church — on the last day of 2014. The deal was closed at 9 a.m. and they had begun to use the building for prayer services at 3 p.m. that day.

Sayed and his family had been laying the groundworks for that move for years. In 2004, they started a Sunday school which they held in rented out spaces and Shaher Sayed’s wife, Amal Khdour, started the clinic in 2009.

“We started just renting a place here and there to do the prayers,” Shaher Sayed said. “And then [we] realize[d] this is not sustainable.”

The building allowed them to transform the space not only into a place of worship but a community center.

The pandemic has put some restrictions on this community though, now prayers are mainly being held through Facebook Live, and many events, like the Sunday school, are virtual.

Elon University senior Srija Dutta attends the virtual weekly game nights put on by the masjid’s youth program. Although she is not Muslim herself, the international studies major has been involved with the program since her freshman year. While the game nights are different than visiting the masjid in person, Dutta said it is one of her favorite memories.

“It’s very different from the events that we’re used to,” Dutta said. “But I think that because they’re so different that it honestly adds like another layer of importance to them, and every single week I know, regardless of what happens I get to get on that call on Sundays and I see all these smiling faces.”

Moneeb Sayed, Shaher’s son, is the youth coordinator at the masjid. He started the youth program nine years ago during his senior year of high school because he wanted to make sure he stayed involved with the community after he graduated and because there was no other place for Muslim youth to hang out with other Muslims.

“There wasn’t that spot where I could go and hang out with other Muslim youth,” Moneeb Sayed said. “A lot of youth, they’re going through things where it’s like, ‘I’m all alone. There’s nobody like me. Am I weird because I’m Muslim?’”

Almost ten years after it started, the program is mostly run by members of the youth committee — which is made up of six or seven young members of the mosque — and Moneeb is there as support.

“It’s run completely by the youth,” Moneeb Sayed said. “These days, we’re actually sitting down with the committee. And just ask them, What do you guys want to do?”

As for the community’s receptions of the masjid, Moneeb Sayed was surprised by how open they have been.

“There’s a lot more folks that are open minded, willing to work together, despite anybody’s backgrounds and all that,” he said.

"I'm really looking forward to coming here one day and finding people from all different faiths coming together and doing things for the community, each one serving in their own capacity and ability."

Imam of the Burlington Masjid

The masjid has been able to do some events with local churches, such as inviting them to break fast with them during Ramadan, with one Christian congregation even inviting them to do it at their church.

“That was like really making history that, because it hasn’t happened before that the whole Muslim community goes in the church,” Shaher Sayed said. “The prayer rugs, they have spread some on the floor for us, the food, even the dessert, they picked up stuff that they know Muslims like.”

As for what Shaher Sayed looks forward to after the pandemic it is going to the mosque and finding people there.

“I’m really looking forward to coming here one day and finding people from all different faiths coming together and doing things for the community, each one serving in their own capacity and ability,” Sayed said. “And that we will stop tagging people based on their religion or ethnicity that we just are all together. We all are humans and we share this space called community.”