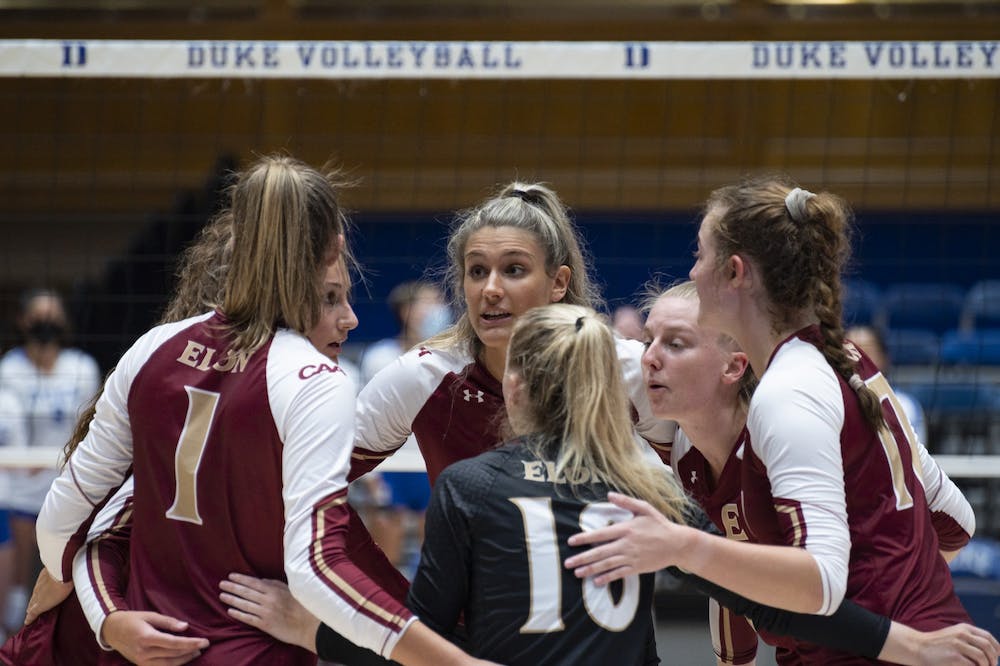 DURHAM, NC — Elon University’s women’s volleyball team lost to the Duke University Blue Devils in straight sets (20-25, 22-25, 16-25). Despite absorbing much of the Blue Devils attack, the Phoenix was unable to generate enough offense to take a set in Durham.

“They were the ones hitting the hard balls at us all the time, we started to get some plays towards the end, and we have two really good plays at times, but not consistent enough,” Head Coach Mary Tendler said.

Duke bolstered an ironclad defense featuring a high wall with players over six feet tall and talented passers backing up the shots that would get through. This defense kept most of the Elon hitters in check while stretching the points out to long rallies. The longer the rallies went, the more animated the home crowd at Cameron Indoor Stadium became.

Despite the considerable challenge against them, the Phoenix was able to find some cracks in the Duke defense. Senior setter Haylie Clark utilized slide sets, setting the ball backwards to a cutting hitter, to free the Phoenix attacker from the Duke blockers.

The Phoenix were also able to generate points and momentum through the play of their senior ace outside hitter Leah Daniel, who led the Phoenix in scoring with 13 kills despite being targeted by the Duke wall.

“Our opponents are always gonna key on Leah so she has a tough job,” Tendler said. “But I think she's ready to step up to that challenge and she's already showed that this year,”

The Phoenix were able to keep close with Duke in the first two sets by extending rallies and taking away potentiale points from the Blue Devils. Junior libero Jordan Gower was the key to slowing down Duke’s offense. The defensive specialist anchored the Phoenix defense by digging up a whopping 17 Blue Devil shots.

“We can always count on [Gower],” Tendler said. “Any ball in her area, she's gonna cover and not just dig, but get a good ball to the setter that we're able to transition off of.”

The loss drops the Phoenix to 1-3 on the season. The team continues its six match road stretch Friday when it travels to Clinton, South Carolina to take on the Presbyterian College Blue Hose.