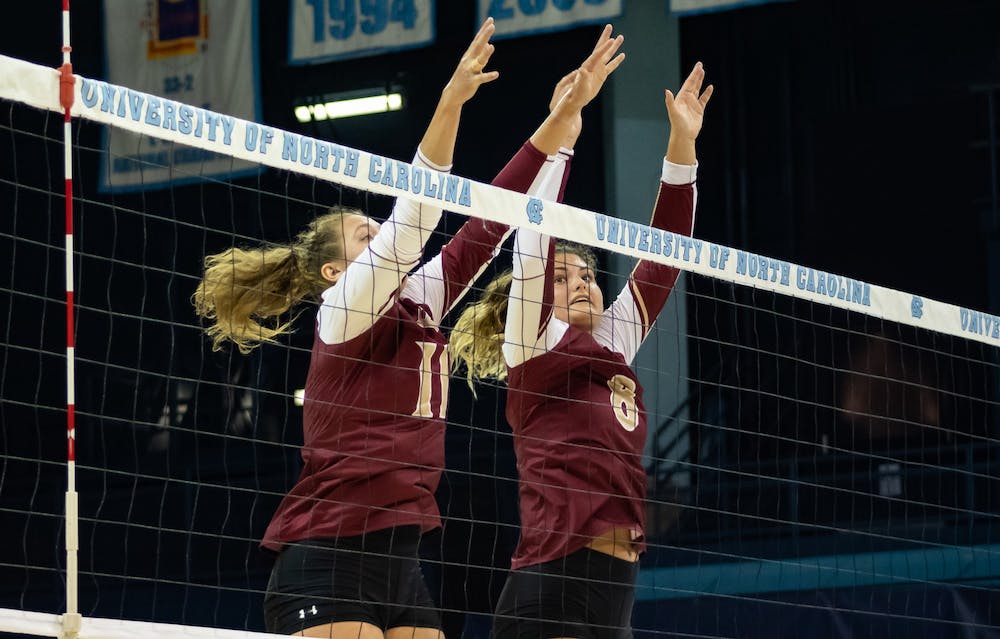 The Phoenix raced out to an 18-13 lead in the first set behind six kills from senior outside hitter Leah Daniel. However, the Tar Heels fought back, winning 12 of the next 25 points to take the first set 25-23.

“We came in ready to play, I really like how we started out,” Head Coach Mary Tendler said. “I liked our demeanor on the court and how aggressive we were from the service line.”

Elon kept pace with the Tar Heels in the beginning of the second set, tying the score at 7-7 with a kill by freshman outside hitter Sydney Love. The Tar Heels quickly responded with a 5-0 run and never relinquished the lead, pulling away to claim the set, 25-17.

The Tar Heels kept their momentum going in the third set, racing ahead to a 14-3 lead. North Carolina went on to win the set, 25-8, to close out the match.

“Their serves got tougher as the match went along and then we struggled with their ball control,” Tendler said. “They were able to hit some really aggressive, hard shots into our defense that we struggled digging.”

The Phoenix are now 3-6 all-time against the Tar Heels, losing the last six meetings between the schools. Elon has not won a match against North Carolina since 1974.

North Carolina, now 9-0, received 22 votes in this week’s American Volleyball Coach’s Association poll, putting them just outside the top 25. Volleyball coaches from around the country vote on the poll, which ranks the best 25 teams in the country each week.

The Phoenix, who sit at 5-5 on the season, begin their Colonial Athletic Association conference schedule with a doubleheader against College of Charleston this weekend. Tendler said playing such a tough opponent to finish off non-conference play should help prepare the team for CAA play.

“Playing against UNC tonight is going to make us better,” Tendler said. “Hopefully, this match will prepare us for what he have in store against Charleston.”