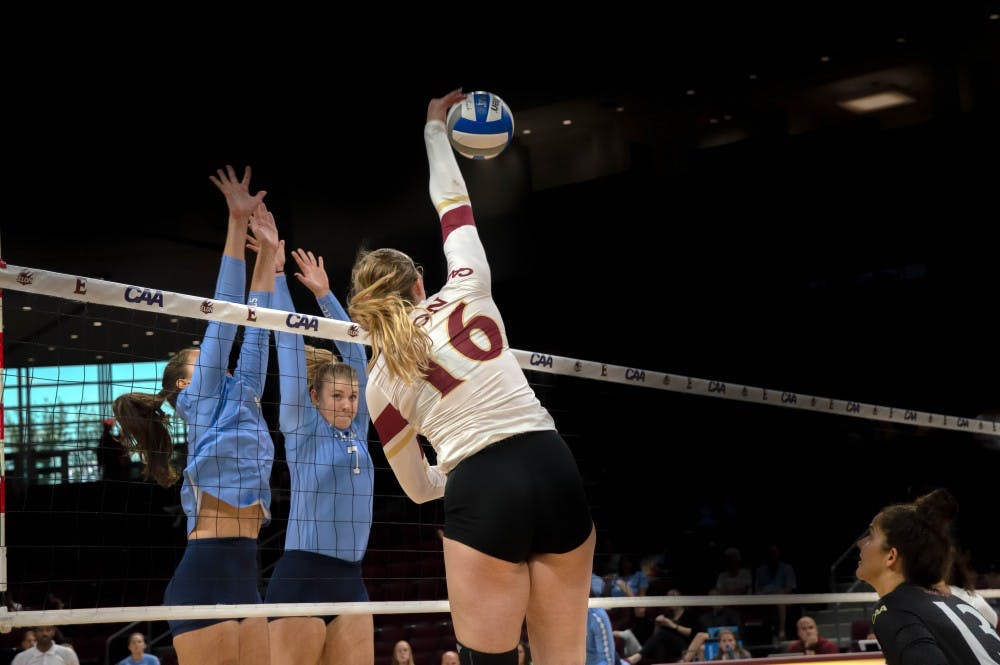 Elon University Volleyball (8-3) was quickly thrown into a match against the University of North Carolina at Chapel Hill (4-6) in a game that was announced little more than 24 hours before the start of the match since Florence caused cancellations for both teams.

According to 16th-year head coach Mary Tendler, the results of this game came as a surprise.

“We didn’t know for sure until yesterday actually [if the game would be played].” Tendler said, adding “It felt like a practice almost, still preparing for the College of Charleston on Friday.”

Elon went back and forth with UNC in the first set. They lead for most of the seesaw set, dipping first when UNC took their first lead at 12-11 on a kill by sophomore Aristea Tontai. Four unforced errors, including a service error, by the Phoenix dug the team deeper into a hole, giving UNC the four points they needed to close out the first set.

“Volleyball is a game of mistakes. You’re going to have to lose point sometimes, so being able to take that with a grain of salt and have fun keeps us here and keeps us wanting to do more,” said senior Maddie Jaudon.

Elon dropped the second set as well. The Phoenix could not string together points and quickly found themselves down ten points, 17-7. Elon was finally able to find some rhythm when they rattled off five straight points a bit further into the set.

But the Phoenix were unable to build off of that momentum. Elon earned their share of points and tried to hang with the Tar Heels, but they went back to their old ways, falling in a two-sets-to-none hole following a 25-18 loss in set two.

Despite fighting hard, the Phoenix failed to capture a set against the Tar Heels. The beginning of the third was competitive between the two as they traded points, making it 4-3 in Elon’s favor. However, the Tar Heels went on an 8-2 run, increasing their lead and doubling Elon. Despite their best efforts, Elon was unable to close the deficit, dropping the final set 25-18.

Even in losing efforts, Tendler sees each game as a chance to improve.

“Every day when we get on the court to practice or for a match we’re just trying to get better, especially with first contact.” Tendler said.

Volleyball's next game will be on the road at the College of Charleston, starting Elon’s Colonial Athletic Association Conference play on Friday, Sept. 21.

Jaudon said for her, her mind is on one thing when it comes to CAA play: “Winning.”

Tendler is confident in her team and she is excited to see the court Friday night.

“We feel like we’re in a good position. We’re ready to go.”