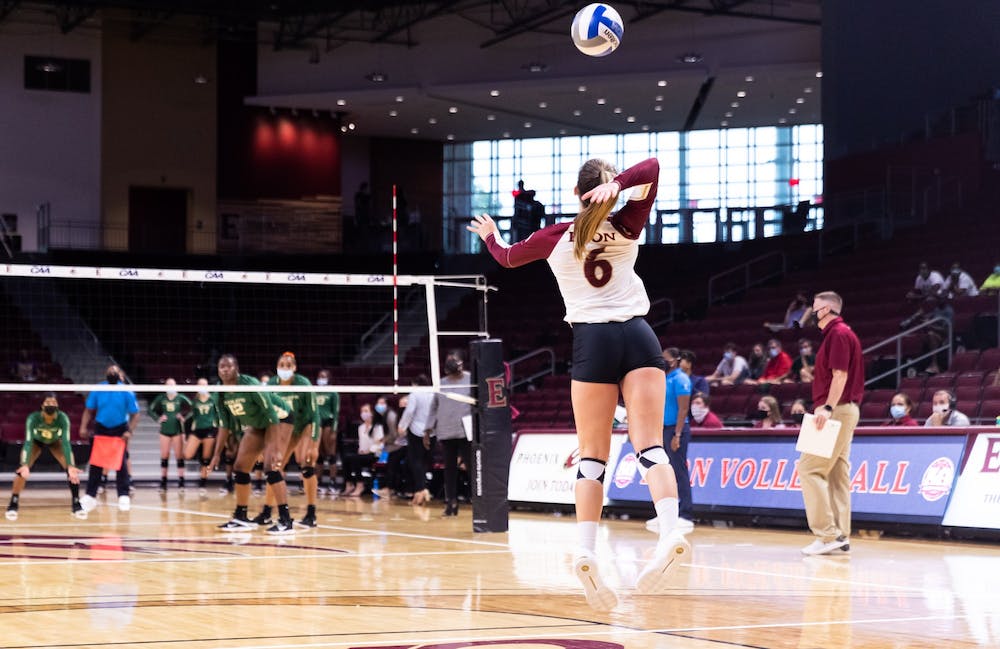 
It was a battle of two freshmen Wednesday night in the Schar Center, as Elon lost in straight sets (25-22, 25-22, 25-19) to a tough University of North Carolina Charlotte team.

It was a battle of two freshmen Wednesday night in the Schar Center, as Elon lost in straight sets (25-22, 25-22, 25-19) to a tough University of North Carolina Charlotte team.

The Phoenix had no answer for Charlotte freshman Emani Foster, who rattled off 21 kills against five errors to lead the 49ers to a victory. The 49ers also out-blocked Elon 12-4 and led the contest in assists, 38-31.

“We played against a very good team here tonight. It just took us too long to adjust,” Head Coach Mary Tendler said.

Tendler said the silver lining in the match was the excellent performance from Elon University freshman outside hitter Sydney Love, who led the team with 12 kills.

In the second set, with Elon down 24-20, Love did all she could to help the Phoenix fight back. Love had four kill opportunities, one after another, and was unfazed by the first three being returned, as she scored on the fourth while her teammates cheered her on.

“She’s figuring out where the holes in the defense are so she’s able to score,” Tendler said. “I like what I’m seeing from her and she’s just going to keep getting better and better as the year goes on.”

Elon’s defense held stout for much of the match as well, as junior libero Jordan Gower had her seventh straight error-free game. Gower has yet to record an error this season, and she contributed 15 digs, pushing her over 600 for her career.

“It was rough at some points, but defensively I felt good, just trying to keep the ball off the floor,” Gower said. “We all tried to work together and do the best we could, but we came up short, but we’re looking to climb back up and come back on Friday.”

The Phoenix, now 3-4 on the season, has a quick turnaround, as they host the UNC-Asheville Bulldogs on Friday. Asheville currently holds a 1-4 record and have lost their last three matches in straight sets. The match will be the second in a three game homestand for the Phoenix.